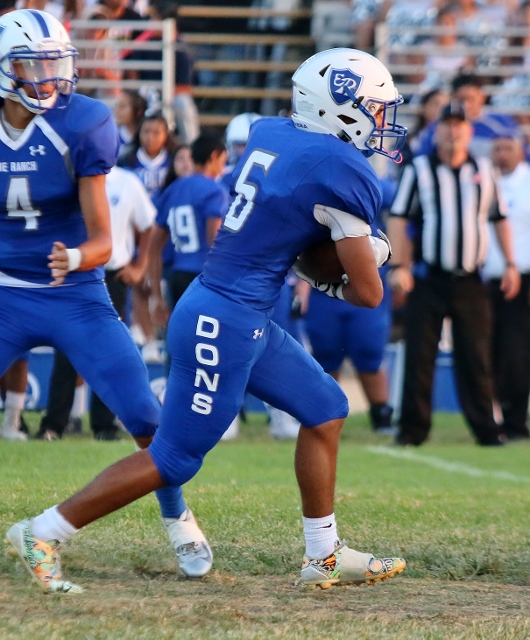 All kickoffs are at 7:00 p.m. unless otherwise noted.

Sierra Canyon has scored 166 points in its last three games – an average of just over 55 points per game. They can sling it with Chayden Peery (2,515 yards passing) or run it with EJ Gable, who rushed for over 1000 yards and 19 touchdowns. Citrus Hill survived last week in a 35-28 win over Downey and is working on a perfect season at 12-0. The Trailblazers are something different though. They’ll bring things to the table that Citrus Hill just isn’t used to seeing. Sierra Canyon advances to the Finals.

Last week Palos Verdes beat a tough Aquinas team 12-7 in a defensive struggle. Glendora meanwhile has been racking up points. The Tartans scored 48 last week against Apple Valley and 56 in the opening round of the playoffs against Burbank. Points might be a little harder to come by for Glendora against a team like Palos Verdes but the Tartans should have enough in the end. A tie game turns on a big offensive play in the fourth quarter. Brandon Roher takes the Tartans to the CIF Finals in his first year.

South Hills is another team that is still without a blemish heading into the semis. While the offense has been effective, its been the defense that has been making headlines. The most points in a game that the Huskies have given up all year was 21 to Diamond Ranch October 11 and they have allowed just 23 points so far in the first two playoff games. Pacifica can score. The Tritons scored 58 against Fullerton two weeks ago and 31 in an overtime win over Mayfair last week. Producing like that against South Hills though might be a different story. The Huskies are big and physical and just keep on coming. Huskies advance.

Culver City is always a difficult place to play. Just ask Covina which traveled out to the West side last year in the Division 11 Semi Finals. The Colts did manage to come away with a 57-56 win in overtime in a game that had more offense than an Arena Football League contest. We might get the same thing this year. Northview and Culver City can both light it up. And the Vikings and the Centaurs both have plenty of weapons to strike quickly. The difference is the Northview defense. The Vikes have pitched four shutouts this year and have allowed just 14 points total in the first two playoff games. Culver City will score but Northview will match them punch for punch. In the end the Vikings will make one more stop. Northview gets the W.

Arcadia has way too many weapons. The Apaches have been lighting it up all year and this week will be no different. Alta Loma gave up 50 points to Bonita and 45 to Glendora, both solid teams that are still alive but with offenses that aren’t as explosive as Arcadia’s. Alta Loma just doesn’t have the horses to keep up. Apaches are headed for the Finals.

Tough matchup for Bonita facing a Highland team that hasn’t lost a game all year. But the Bulldogs haven’t played a team like the Bearcats all year either. In the Palomares League every week was like a playoff game. Bonita’s only two losses (on the field) came in league play. Steve Bogan’s first year at Bonita has been a major success. A trip to the Finals would be the exclamation point. Last week Bonita held off Hillcrest in a shootout 45-40. Highland was tested once all year – a two point win over Knight back in October. If Bonita gets a lead, will Highland be able to play from behind? A couple of quick early strikes by the Bearcats could be enough to spark the victory. Bogan leads Bonita to the CIF Finals in his first year.

Eisenhower isn’t the power it was in the early nineties when they were in Division 1 but the Eagles did roll to a 12-0 record while winning the San Andreas League. Eisenhower hasn’t allowed a point in the playoffs shutting out their two opponents by a combined score of 67-0. If you throw in the last game of the regular season, the Eagles have outscored their last three opponents 122-8. No that’s not a typo. El Rancho has been racking up points as well scoring 106 points in their last two wild playoff games. Last week they had to overcome a big halftime deficit to rally to a dramatic 56-52 win over Knight. The Dons have scored 50 or more points on six different occasions this year. It will depend on who makes the most stops. If El Rancho was going to lose it would have been last week after falling behind. The Dons look like a team headed for the Finals. ER wins at home.

By far El Monte’s biggest test in the playoffs so far. Adelanto, like El Monte comes in with a record of 10-1. The Saints dropped 60 on Savanna last week. Earlier in the year they lit up Cerritos for 79. So we know they can score. But so can El Monte and the question is can Adelanto make a stop? They’ll make a couple, at times, but not enough to derail the El Monte Express. Lions are on a fast track to the Finals.