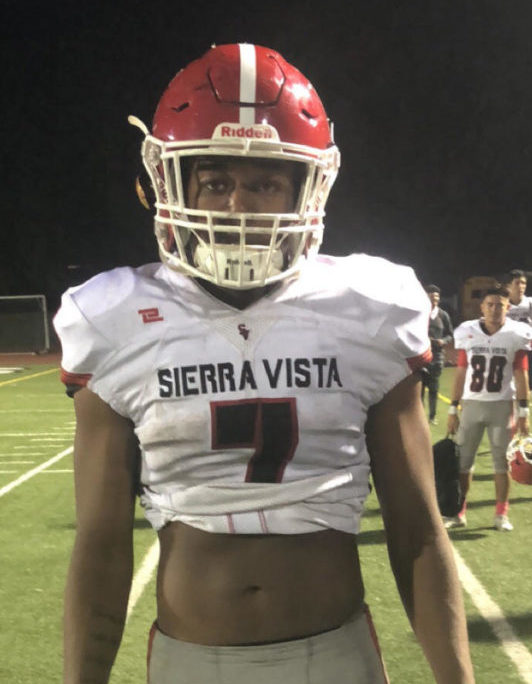 (La Puente) – Nicholas Soares scored four rushing touchdowns to lead Sierra Vista to a 54-15 come from behind victory over Nogales on the road Thursday night.

The Nobles started off early scoring on their first drive as quarterback Malon McDaniel shifted through the Dons defense for a 66-yard dash to paydirt making it 8-0 after a successful two-point conversion.

Sierra Vista tied it up in the second quarter when Soares scored his first touchdown of the night from five yards out.

Nogales took the lead right back when McDaniel again broke free this time from 60-yards out making it 15-8 Nobles and it stood that way going into the half.

The Dons came out in their “heavy offense” pounding it on the ground but Soares tricked everyone and threw a pass to Dominik Velasquez for a 47-yard touchdown making it 16-15 Sierra Vista.

Soares and the Dons never looked back scoring 32-unanswered points in the third quarter. Soares found the end zone on runs of 32, 13 and 4 making it 40-15 after three quarters of play.

Sierra Vista quarterback Alan Flores got in a grove in the fourth quarter hitting Andre Corona for 21-yard touchdown and Juan Meraz on a 37-yarder capping off the scoring at 54-15.

Flores finished 13 of 29 for 195-yards to go with two touchdown passes and two interceptions. Soares had 93-yards on 11 carries for four touchdowns.

McDaniel was the Nobles offense getting nine carries for 182-yards and two scores. Issac Galvan was a line bright spot on defense with two interceptions till injury took him out the game.

Sierra Vista (7-0) will host Gladstone next week, while Nogales (0-7) travels to play Azusa.

6 Comments to "Soares, Sierra Vista, Too Much for Nobles"