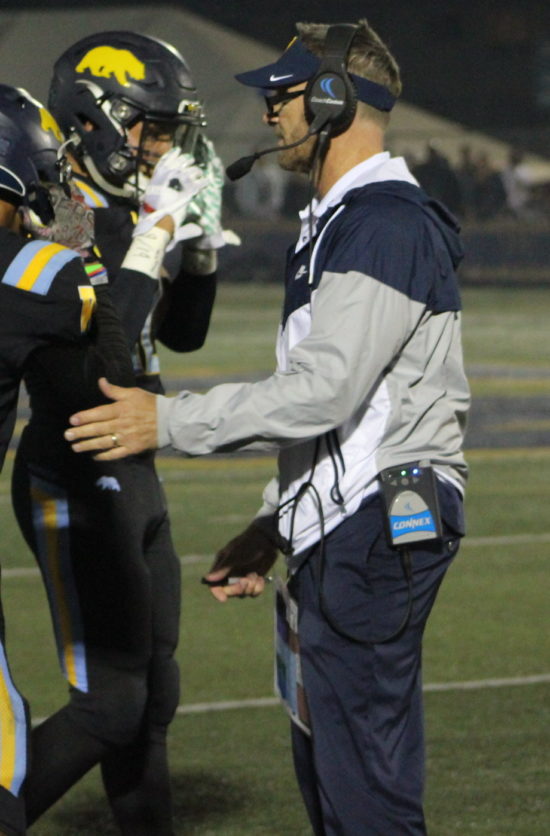 Kevin Pearson has been a head coach for over 20 years. He gave us some time for a Q & A.

Kevin Pearson was the head coach at Cathedral for 22 years before stepping down after the 2017 season. Pearson won 196 games and 9 league titles during his tenure. He took over as the head coach at Warren before last season guiding the Bears to an overall record of 7-4 and a spot in the CIF Division 6 playoffs. I had the opportunity recently to have a Q & A with him.

Q: How are you and your coaching staff communicating with your players during this current pandemic?
A: As soon as quarantine began, we started regular zoom meetings with the kids. We had position meetings and group meetings weekly throughout the quarantine. We met with the kids four times a week. One of the four days was an academic meeting to stay connected with players and follow up on their academic progress. I thought the meetings were very productive considering the circumstances and was pleased that we had a very high participation rate. Our meetings were used to install, test for knowledge, review cut-ups of our individual plays from last season. We have an outstanding weightlifting coach named Greg Washington who designed a weightlifting and conditioning plan for the players to do at home, which he updated every two weeks.

Q: Where did you play your high school football and what position?
A: I was a quarterback at South Gate High School.

Q: Did you play football after high school? If so where and what position?
A: I maxed out at junior college, where I played quarterback at East L.A. College.

Q: When did you decide you wanted to be a high school football coach?
A: During my last year at Cal State L.A., I was working as a tax intern at Coopers & Lybrand, a Big 6 accounting firm in the Downtown L.A. office. At that time, my brother was a student-teacher at our Alma Mater SGHS and was offered a permanent teaching position if he accepted the head coaching job for the frosh/soph football team. Because he didn’t play high school football, he felt a bit nervous and immediately called me to help him. Shortly thereafter, I found myself looking at the clock from my cubicle waiting for 2pm to come around so I could leave for football practice. I realized at that point that I was hooked. The competitive spirit in me was being fulfilled once again in a sport I loved but the most important factor in me wanting to be a coach was the relationships I was forging with the players, their families and coaches. I really was humbled with the realization that I could have a huge impact on these young men’s lives.

Q: When you stepped down as the head coach at Cathedral after the 2017 season after a long successful run, did you plan on coaching again? What was the main factor in you returning to coach at Warren?
A: I was so blessed to be at Cathedral High School all those years and to really grow into the position. Truthfully, when I stepped down, I had no clue whether I would coach again. At that point, I had been a head coach for 23 consecutive years and completely immersed myself in that program. It’s both a blessing and a curse when you have that type of mentality. So I became very reflective as my oldest son, who plays baseball was about to start high school. My daughter who plays high-level academy soccer was one year from high school and my youngest son had been asking me for years to coach him in baseball. I realized I was increasingly more absent in their activities. I was looking forward to spending more time with my family. Ironically, I actually ended up coaching during my “year off” when Jeff Chi, South Pasadena’s HC, asked if I’d help them out after my son’s first practice. Although that was never my intention, I had the opportunity to coach my son’s first year of high school football, which was a huge blessing. It wasn’t long that I realized how much I missed the relationships with the players and the game. I knew after that season that I would be looking at job openings. After an initial 2 hour meeting with the AD at Warren, I knew without a doubt, that that’s the place I wanted to be. She confirmed everything that my brother, who is the baseball coach at Warren, had told me about the school, administration and the school district. Their academic and athletic support aligned perfectly with my philosophy to lead a program successfully. We have an incredible principal, AD and administration who care deeply about our kids. They want nothing but the best for our students and it’s manifested in so many ways. I’ve been overwhelmed by the support and efforts by everyone, including the faculty on so many levels. In fact, a very distinguished faculty member approached me with an idea to start an academic and character-building program just for our football players. Now, with the help of other distinguished faculty members, the Warren Football Academy was created and implemented and has been instrumental in much of our academic success.

Q: What coach had the biggest influence on you and why?
A: Former Los Alamitos HC John Barnes was a huge mentor to me as a young HC for a number of years. He gave me unlimited access to his program and spent so much time teaching me as an OC and HC. Also, two coaches that I’ve admired and learned from through reading many books are John Wooden and Tony Dungy. I’ve taken a lot from their philosophies, especially relating to relationships.

Q: Last year Warren went 7-4 overall, including a remarkable, dramatic win over Downey, before falling in the first round of the CIF Division 6 playoffs to La Serna. How does this year’s squad look?
A: I was very proud of last year’s team and what we accomplished. I am so blessed to have an incredible coaching staff who are above all else great mentors. We consistently talk about being in a constant state of improvement and I witnessed that firsthand from when we started in April through our last game. I was so pleased to see so many of our young men improve in the classroom and on the field. They worked extremely hard, were very disciplined and consistently gave great effort in practice and in games. They were a fun group to coach and be around. The Downey win epitomizes that team. Scoring 26 points in the 4th quarter after being down 19 points in the 4th quarter in front of 8000 passionate and crazed fans to win that game shows the character and resolve of those young men. As far as this year’s team, we began immediately on Monday following the La Serna playoff loss in our 1st period football class. By March, we were farther ahead than any other team I’ve ever coached in terms of strength and conditioning. So when Covid hit, it was very disappointing. My concern has been that much of that momentum would be lost. We already lost to graduation 23 seniors including one of the best QBs I’ve ever coached (Dylan Guerra) our All-CIF WR (Keison Evans), our only 2-way starter (Stephen Austin) and all 4 starting defensive lineman. So the success of our offseason program would be critical to our success. However, we are fortunate to have All-Leaguers LB Rocco Caballero and FS Xamarian Gordon (who is committed to USC) and OL Peteru Umi who are all excellent leaders returning. We are going to be really inexperienced this year in some key positions including the QB position, but I’m excited about the potential of our team.

Q: In your opinion will there be a football season this year? And if so what will it look like? Will it be abbreviated?
A: That is a very difficult question to answer at this point. There’s really no point of reference to make a logical prediction of the future of the season in these unprecedented times, but I’m hopeful that there will be a season. We are moving on and preparing as if there will be a season. I’m looking forward to July 20th when the CIF announces their decision on the status of Fall Sports.

Q: Who are the 5 best players that you have ever coached?
A: This is the most challenging question that I’ve ever been asked by a sports reporter. It’s kind of like asking to rank your own children in order. I’ll start out by saying that I’ve been blessed with many, many, talented players over the years, and to acknowledge a top 5 would really be impossible. We’ve had some really outstanding individual achievements that can’t be ignored. We’ve also had some individuals who played in different eras who were great athletes on more talented teams who played in different divisions. So after 24 years, please forgive me for going over the limit. So here is my #1 player and a list of very close seconds:

1) Bryce Young, QB (’20), Alabama. Do I need to mention he’s the #1 ranked QB in the country and #2 overall player and has been awarded every local, state and national honor bestowed on a high school athlete…oh and a future Heisman Trophy Winner? Obviously, I didn’t coach him his last two years of high school ball, but for the two years I did coach him, he still ranks #1. He’s absolutely a generational talent and it was always apparent that he was special, different than anyone I’ve seen. And part of what makes him so special is the type of young man he is. He is so grounded, focused, intelligent and mature beyond his years. He never shies away from his faith and relationship with God, and it’s never about him. Bryce handles pressure situations better than anyone I’ve ever seen. He actually gets better as the situation gets bigger. He literally makes everyone around him better because of his character, and I’ve literally never heard him say anything bad about anyone, nor have I met anyone who doesn’t love this young man as a person.

After Bryce, each of the following were difference-makers on the field and impacted the game tremendously.

*Chris Hanks-RB (’98), CAL. Chris was a Prep All-American who rushed for 3118 yards his senior year and scored 49 touchdowns. He also rushed for 1981 yards his junior year. Chris was CIF Offensive Player of the Year and he also started at cornerback for three years.

*Robert De La Cruz, QB (’00) Robert was a multiple Cal-Hi All-State selection and the first QB in the country to throw for 60 touchdowns in a season, a feat he accomplished two years in a row. He ended up as the state’s record holder in TD passes for career (134), season (65), and game (9). He was CIF Offensive Player of the Year, and League MVP. He threw for over 9000 yards in his career.

*Earvin Johnson, WR (’01) UNLV. Earvin was a multiple Cal-Hi All-State selection. He turned downed offers from Pete Carroll at USC, UCLA, Oregon, among others to play for John Robinson at UNLV where he started all four years. Johnson ended up setting a national record for most touchdown receptions in a game (8) and held state records for TD receptions in career (64), season (29) and game (8).

*Ralph Pineda, MLB (’03) San Jose State. Ralph led us to four straight semi-final appearances playing MLB and QB. He was All-CIF and currently plays professionally in Europe as a player/coach, which he has done for the past ten years.

* Randall Carroll, WR (’09) UCLA. Randall was a USA Today All-American and played in the U.S. Army All-American Bowl. He was the state champion in both 100 and 200 meters both his junior and senior year.

*Xamarion Gordon, FS (’22) USC commit was named a Tom Lemming Pre-Season Prep All-American this spring and currently is a top ranked safety in the country.

9 Comments to "Q & A with Warren HC Kevin Pearson"