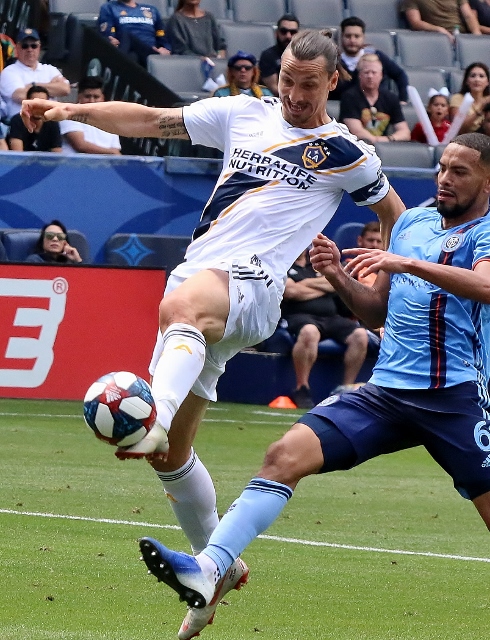 Zlatan Ibrahimovic and the Galaxy struggle with NYFC. (Photo by Duane Barker)

(Carson) – The Galaxy had their chances but came up empty in a 2-0 loss to New York City Saturday before 22,806 at Dignity Health Sports Park.

NYCFC scored both of its goals in the first half and then held on the rest of the way. The Galaxy had several opportunities to gain some momentum and even appeared to score the first goal of the game in the first half but an offsides penalty negated the goal and LA never got untracked.

New York City was the aggressors early with several forays into the box. The Galaxy’s Julian Araujo knocked away a potential threat in the seventh minute as he kicked one out of the box.

In the 17th minute New York’s Alexander Ring fired a shot but it was wide left. In the 19th minute Galaxy goalkeeper David Bingham saved a goal when he beat an NYC attacker to the ball and knocked it away. 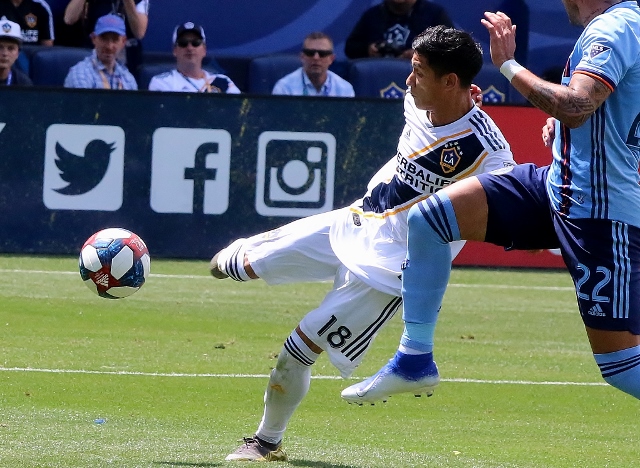 Uriel Antuna tries to get a shot off against NYFC. (Photo by Duane Barker)

Zlatan Ibrahimovic appeared to put the Galaxy up 1-0 as he guided one into the net off of a nice dish from Uriel Antuna in the 27th minute but the official ruled offsides and it remained scoreless.

New York City got on the board in the 44th minute when Heber scored on a rebound off of a shot by Anton Tinnerholm. Bingham made a good save on Tinnerholm’s drive but Heber quickly followed up and jammed it in.

Five additional minutes were added. In the extra time Antuna was called for a handball in the box that resulted in a penalty. Maximillano Moralez promptly took advantage as he  converted the free kick giving NYC a 2-0 lead at the half.

In the second half Ibrahimovic fed Antuna on the right side and he had a good luck but he booted it high and off the mark in the 55th minute.

In the 71st minute Araujo found Ibrahimovic on the left side but he wasn’t able to corral it and finish.

In the 8oth minute a steal by Emmanel Boateng led to a shot from distance by Ibrahimovic. It flew over the head of the NYC goalkeeper Sean Johnson who was out of the box but Alexander Gallens hustled behind him and headed it away at the goal line.

Six minutes later LA had another opportunity as Ibrahimovic hit the crossbar and Chris Pontius followed with a shot that sailed high.

Five minutes were added to the second half but the Galaxy wasn’t able to push anything across.

For the Galaxy it was their third consecutive loss after a hot start and they dropped to 7-4-1. New York City FC improved to 4-1-6.