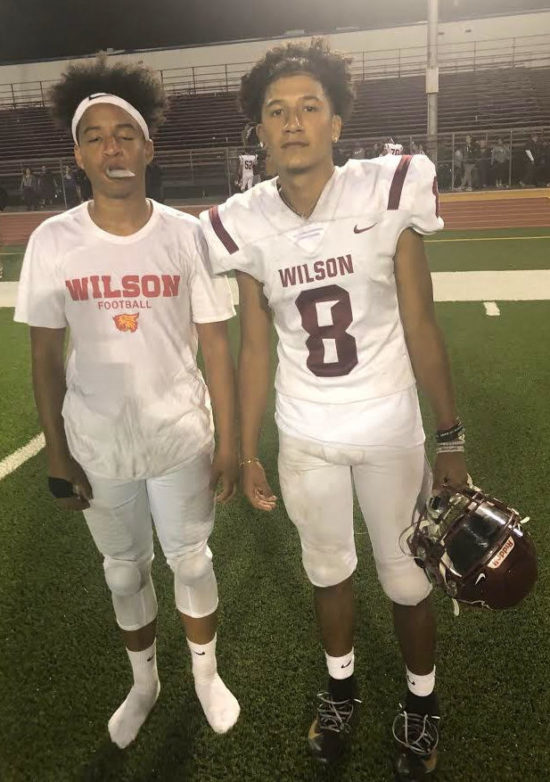 Elijah Lewis left) and Isaiah Espinoza led Wilson to the rout of Workman.

The Wildcats defense started by forcing the Lobos to a three and out. Espinoza took care of it from there capping off a six play drive with a 29-yard touchdown pass to Anthony Guzman.

Wilson again stopped the Workman offense, Espinoza went back to work this time finding Robert Vega from 25-yards out making it 14-0.

Workman got on the board their next possession Castillo hit James Odom on a pair of screens and Fransico Navarro finished it off with a five yard touchdown run cutting the lead to 21-7.

It didn’t last long. On the Wildcats first play Espinoza hit Vega again this time on a 85-yard trip to paydirt making it 28-7 still in the first quarter.

Midway through the second quarter Espinoza this time did it on the ground cutting through the Workman defense for a 88-yard touchdown run, later in the quarter he added a 12-yard run putting the score at 42-7.

Wilson finished their scoring late in the third quarter after a third interception from sophomore Elijah Lewis, Kang got his second score of the game.

On the final play of the game Castillo hit Sergio Flores putting the final at 49-13.

Espinoza finished 9 of 15 for 235-yards and three touchdown passes. He also had three carries for 113-yards and two scores.

Kang chipped in with seven carries for 55-yards and two scores. Lewis has three interceptions and Dominic Grand had a fumble recovery on defense for the Wildcats.

Vega has two receptions for 110-yards and two scores. Guzman had a touchdown reception and a interception.

Wilson (2-3) will host Covina next week while Workman (2-3) will travel and play Gladstone.