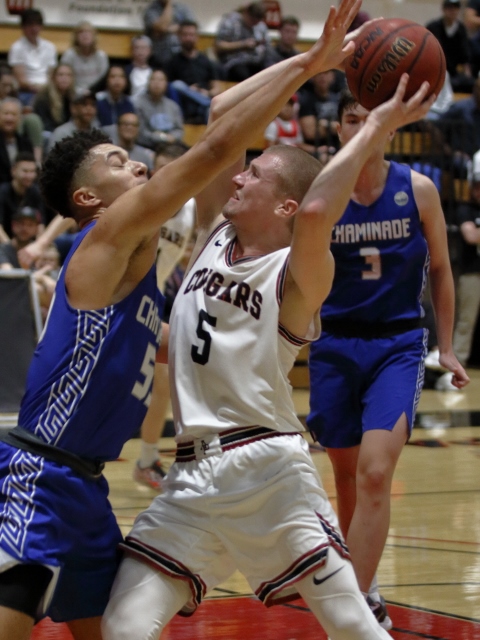 By Tim Peterson
(Glendora) – Selom Mawugbe scored 17 points and pulled down 14 rebounds to lead Azusa Pacific to a 75-71 win over Chaminade Saturday at Felix Event Center in PacWest Conference action.

Mawugbe filled up the stat line hitting 7 of 10 from the floor and also had 4 blocked shots in a dominant performance.

The Cougars never trailed in the contest but Chaminade was able to keep pace throughout. APU was up by just three late in the first half when Ben Avera and Noah Bundrant knocked down consecutive threes and Mawugbe slammed one home to cap an 8-0 run and put the Cougars up 39-28.

Azusa Pacific took a 39-30 lead into the half. Mawugbe had nine points at the break while Bundrant and Avera had eight and seven respectively.

Chaminade came out firing in the second half going on a 12-3 run out of the gate to tie it at 42. Mawugbe responded with a couple of buckets inside to stop the bleeding and put the Cougars back up by four at 48-44 with 13:20 left. 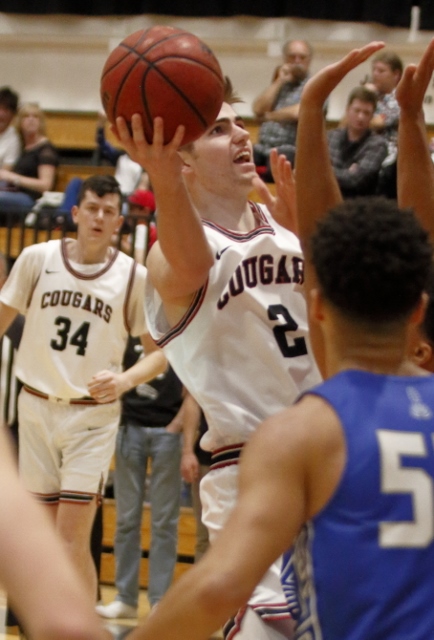 Ben Avera provided a spark for the Cougars. (Photo by Duane Barker).

Chaminade kept up the pressure and kept trying to make a run but the Cougars always had an answer. With the Silverswords making a push Brennan Rymer hit consecutive threes to keep them at bay and put Azusa Pacific up 56-53 with 7:47 left.

Later in the half, Jake Spurgeon nailed a three for a quick 5-0 APU run to make it 65-58. Chaminade was never able to get closer than four points the rest of the way.

Chaminade continually sent APU to the free throw line late in the contest in an attempt to get close but the Cougars were up to the task. Mawugbe, Rymer and Ben Taufahema buried eight straight free throws down the stretch and Azusa Pacific was 12 for 12 from the charity stripe in the second half to ice it.

Rymer was also in double figures with 12 points on the night and Bundrant finished with 10. Spurgeon and Taufahema each had nine with Avera and Terrance Becvar rounding out the balanced attack with seven points each. 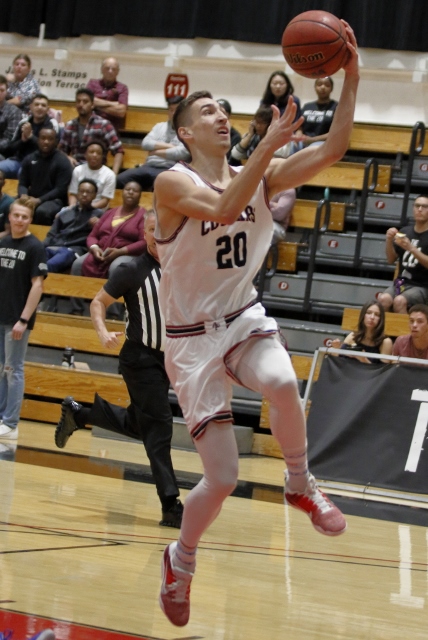 Noah Bundrant hit two threes and had 10 points for the Cougars. (Photo by Duane Barker).

Small led Chaminade with 20 points and Cartaino tossed in 16. Isaac Amaral-Artharee also landed in doubles in the scoring column with 13.

The Cougars continued their hot streak with their 13th straight victory improving to 18-3 overall and 13-2 in the PacWest Conference. Chaminade fell to 13-8 and 11-5.

Next up for APU is a home game against Hawaii Pacific Monday night.