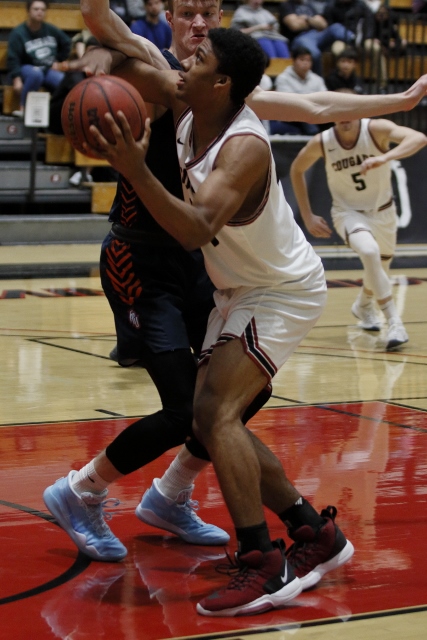 Allan McBride looks to make a move inside. (Photo by Duane Barker).

By Tim Peterson
(Glendora) – Azusa Pacific led by 11 at halftime, increased it to 20 in the second half and cruised to an 80-54 win over Fresno Pacific Thursday night at Felix Event Center to extend its win streak to 15 games.

Jake Spurgeon scored seven points early to get Azusa Pacific off to a 13-5 start. Selom Mawugbe also slammed one home and had four points out of the gate.

Later in the half with the Cougars up 24-16 Ken West and Ben Taufahema hit back to back threes and Mawugbe muscled his way inside to complete a three point play for a 9-3 APU run and a 33-19 lead.

Ken West provided a spark off the APU bench with eight points. (Photo by Duane Barker).

Noah Bundrant and Taufahema buried consecutive threes to keep the Cougs up 39-26 with just under two minutes left in the first half. APU took a 41-30 lead into the break.

Early in the second half the Cougars went on a 10-2 run to go up 59-41. Mawugbe threw down another jam and Taufahema nailed a three to spark the charge.

Later Brennan Rymer hit one from distance and was fouled on the shot. He converted the four-point play to put APU up by 20, 63-43 with 10:05 left. Fresno Pacific could never gain any momentum and the Cougs coasted the rest of the way.

Mawugbe led Azusa Pacific with 20 points and 11 rebounds while Spurgeon had 16 and 10. Taufahema with his three three point bombs was also in double figures with 11 and Rymer finished with nine. APU dominated Fresno Pacific on the boards outrebounding the Firebirds 43-24. 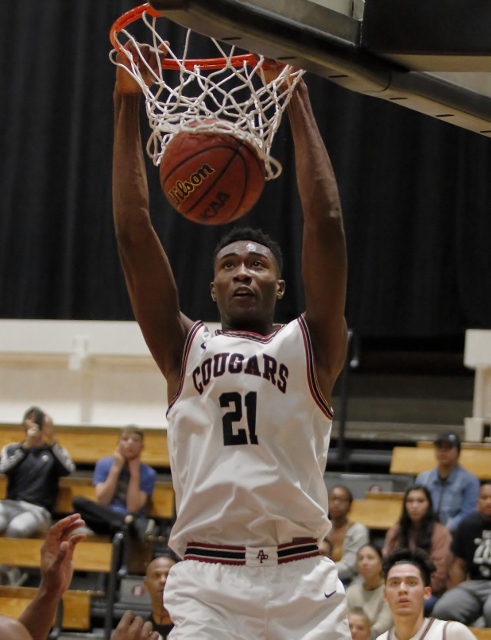 For Fresno Pacific Nate Kendricks had 10 but not other player was in double figures. Raine McKeython had nine.