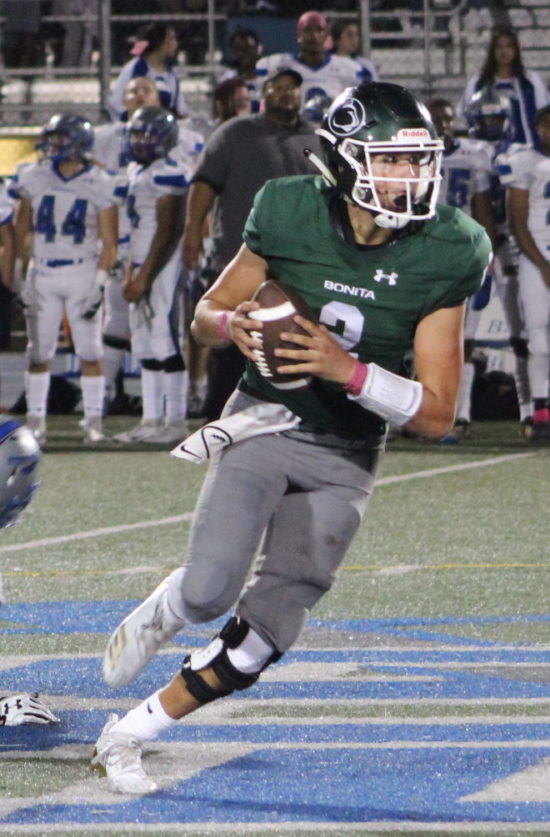 Ibis Aguilar is the current head coach at Baldwin Park and former HC at South El Monte and Bonita. Here are the top five players that he has coached and coached against.

Looking back at all of the players I’ve coached, this was a very difficult list to make. As a head coach, what stood out with these 5 athletes, was their overall contributions to our teams, their work ethic on & off the field, & their character. In the order I coached them…

1. Jose Ambriz – (South El Monte): Jose was a crucial component to the success of my first year as a head football coach & the turnaround season we had at South El Monte High School in 2011. He was a dominant player on the offensive & defensive line. Strong, explosive, quick & hard working. His presence was always felt every time he stepped onto the field. He led by example & his teammates followed. An all-league player on both sides of the ball. Also a 3 sport letterman who wrestled (Heavy Weight League Champion) & threw the shot & discus.

2. Marcos Lopez – (South El Monte): A great athlete that could turn any run or catch out of the backfield into 6 points. Anytime the ball was in his hands, something special could happen. This included when he was on defense as a safety or as return man on special teams. He was always willing to do whatever was needed for his team. He broke numerous school records during his sophomore & junior seasons at South El Monte High School. An all-league player on both sides of the ball. Also a 3 sport letterman who played basketball & ran track.

3. Logan Zylstra – (Bonita): A great example of what a student-athlete should be. Took care of business in the class room & on the football field, day in & day out, while at Bonita High School. Coachable, hardworking & a beast at defensive line & tight-end. He was a great teammate & leader. Was willing & able to do it all on both sides of the ball. An all-league & all CIF player. Also a multi-sport athlete who lettered in basketball.

4. J.P. Andrade – (Bonita): Another great example of what a student-athlete should be. Never had below a 4.0 GPA while at Bonita High School while also excelling on the football field. Worked as hard if not harder than any player on the team, in the classroom, in the weight room, in the film room & on the field. A great teammate & leader, who led by example & with his words. He was always willing & able to help his teammates excel, whether it was with extra work on the field or a study session. As a junior, he broke numerous school records as a quarterback, was all-league & received numerous awards. Also a multi-sport athlete who played basketball.

5. Joshua Rocha – (Baldwin Park): A great athlete who had the ability to score points from every position, any time the ball touched his hands. He scored points running the ball, catching the ball, throwing the ball, returning punts, returning kickoffs, & returning interceptions; all in his senior season at Baldwin Park High School. He could beat any guy that lined up across from him & could catch any ball that was thrown his way. He led his team by example & knew how to get his message across to his teammates. An all-league player on both sides of the ball. Also a 3 sport letterman who played basketball & ran track.

Top 5 players I coached against:

1. Solomon Tuliapupu – Claremont H.S. – All over the field, making every tackle.
2. George Frazier – Monrovia H.S. – Unstoppable on both sides of the ball.
3. Caine Savage – Western H.S. – Could catch anything thrown his way.
4. Davon Booth – El Monte H.S. – Got his yards no matter what you did.
5. Steven Rivera – Arroyo H.S. – Could do it all, on offense & defense.