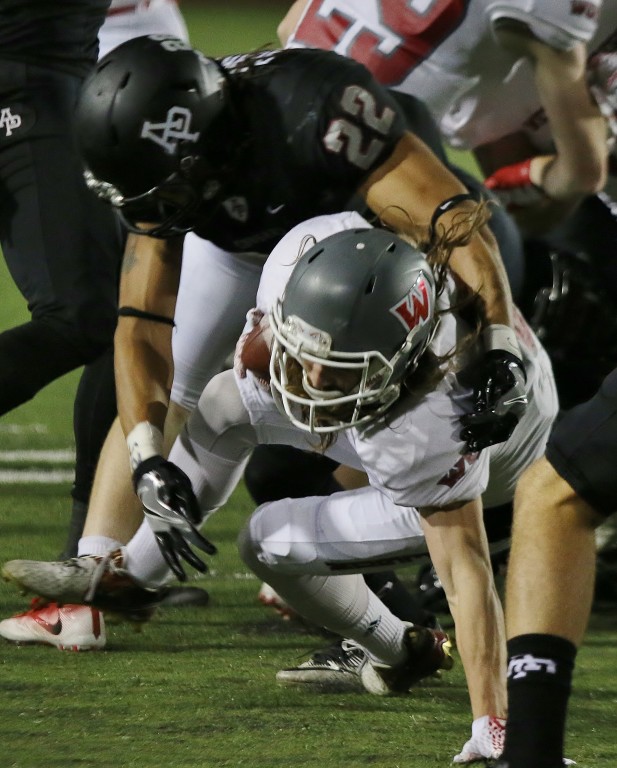 Aaron Berry and the APU defense put the clamps on Western Oregon.

(Glendora) – Azusa Pacific’s defense held Western Oregon to zero yards passing and just 29 overall in the first half and went on to beat the Wolves 33-8 Saturday night at Citrus College on Senior Night.

Western Oregon ended up with 235 overall (70 rushing) but most of those came after the game had already been decided. The Wolves didn’t score until 4:41 left in the contest.

Aaron Berry led the Cougars with nine tackles and was a force throughout the contest. “First of all it was senior night. So this could be our last game here at home. You never know. Our thing is every game is a playoff. You lose one game and you’re done,” Berry said. “Our effort out there was to not let them get in. Our coach told us let’s get to the ball first so that’s what it was about. We’re just a brotherhood. It seems like we bond.”

Azusa Pacific got on the board first when Andrew Elffers hit Josiah Thropay for a two-yard touchdown pass to give the Cougars  7-0 lead.

With the 10:53 left in the second quarter Aaron Baltazar capped a drive with a one-yard run to put APU up by two scores. Jacob Hall missed the extra point.

On the next possession, Chad Jeffries, in place of Elffers, fired a 41-yard TD strike to Ethan Zeidler who sprinted into the end zone. The ball was tipped but Zeidler was still able to hold on and make the play.

Ethan Zeidler was stopped on this play but still managed 97 yards and a touchdown.

The Cougs took the 20 point lead into the half.

Neither team was able to generate much offense in the third quarter. The Wolves moved the ball down to the APU 16 yard line but a 33 yard field goal attempt was missed.

Early in the fourth quarter the Cougars put together a drive that was aided by a pass interference penalty. Elffers finished the march at the 13:38 mark with a five-yard run faking the handoff and then getting outside and into the end zone.

Western Oregon again moved the ball down into APU territory before the drive stalled at the 33. A 50-yard field goal attempt fell short.

The Cougars immediately responded with a long pass from Jeffries to Tanner Henry setting up a nine-yard TD pass to Henry for a 33-0 lead as the extra point was missed. For Jeffries, the former Glendora High School quarterback, it was his second touchdown pass of the night.

Western Oregon finally broke through in the fourth quarter on a 70-yard touchdown pass from Nick Duckworth to Paul Revis. Duckworth hit Andy Avgi for the two point conversion that made it 33-8.

With less than a minute left Sam Flemming picked off a pass when Duckworth tried to get rid of it while being sacked. He returned it 37 yards for an apparent touchdown but he was called for excessive celebration when he did a flip as he entered the end zone and the score was called back. The Cougars then ran out the clock.

For APU, Elffers completed 20 of 27 for 177 yards and a touchdown without an interception while Jeffries was 6 of 8 for 128 yards and two scores. Brandon Jackson had six catches for 82 yards and Zeidler had four for 97 and a touchdown. But the defense was the main story.

“This defense, they’re just great guys to be a part of. I’ll tell you what their work effort shows up every single day. They push and challenge themselves,” said Azusa Pacific Head Coach Victor Santa Cruz. “We play great defense every year here. So it’s a great effort but we still have a long ways to go.”

With the victory Azusa Pacific improved to 9-1 overall (7-0 in the GNAC) and will travel to Colorado Mesa next week. A win would put the Cougars in the mix for a spot in the Division 2 playoffs.

“The goal here is to win one game at a time and now you’ve put yourself in a position to make a playoff run. Obviously next week is big. We’re playing a nationally recognized team. Mesa is a great program,” Santa Cruz added.” But we’re hungry to get to the playoffs. Our guys will get to work on Monday and we’ll get after it.”

Western Oregon dropped to 3-6 and 2-5 in conference.