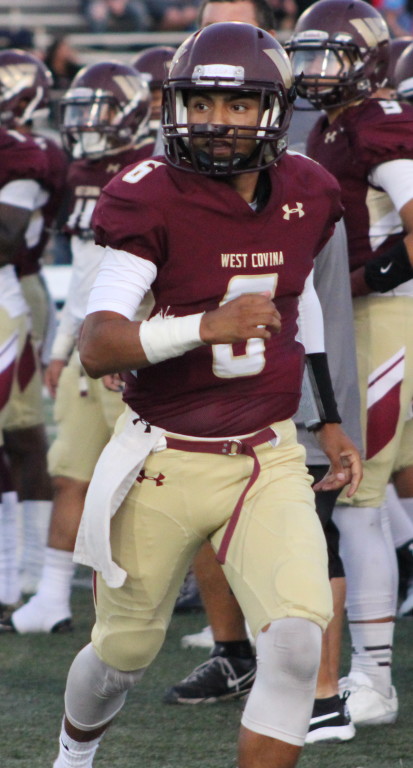 Can Joseph Barcena and the West Covina Bulldogs go out to Fontana and upset Summit?

We all know what La Mirada has done but Paso Robles hasn’t done so bad either. The Bearcats, hailing from the Pac 5, has only lost twice all year like the Matadores. Their only slip ups were to two powerful teams in Sierra Canyon and Arroyo Grande. Paso Robles racked up over 40 points five times this year and over 50 twice so the Bearcats can put points on the board. So can La Mirada and the Mats are used to these type of tests. They had a death march at the beginning of the season. They’ll be ready for whatever Paso Robles brings. Mats win.

These two teams have played before. The Chargers belted the Tartans 43-0 back on September 9 and there’s nothing that has changed now. Well, there is one thing. The Chargers have a new quarterback now. Matthew Takata replaced Zack Niccoli who replaced Brett Clemetson. But regardless of who is behind center Charter Oak is simply bigger, stronger and faster. Glendora finished at 5-5. Make that 5-6.

These two teams went it as well early in the year. Back on Zero Week Los Altos blasted San Marino 38-6 on the Titans home field. San Marino has shown some signs of improvement. The Titans fell by only a touchdown to Monrovia and pounded South Pasadena. However their loss last week at La Canada was disappointing. The Conquerors on the other hand have rolled over everything in their path. Their win over Charter oak was epic and they followed that up with a shut out of West Covina. This one won’t be close. Los Altos and Tyler Nevens will put an end to it early. The Conq faithful will be looking at their second round opponent by halftime.

Joe T.’s High School football novel is available through Amazon.com
“Joe captures the essence of high school football and does it with a local flavor that makes this book especially interesting.”–Mike Maggiore, HC West Covina Bulldogs
“A literary snapshot of what goes on over the course of a high school football season…an awesome read and a story that truly will transcend time.”—Jim Singiser, AD/HC Arroyo Knights Football
“Thrill, dread, anxiety, love, agony, success, and failure; basically all the emotions you feel as a football player/coach as you do in life, all wrapped up in a single book.”—Marc Paramo, HC Rosemead Panthers Football
“I read the book and really enjoyed it a great deal. I would think coaches and parents could Learn a lot.”—John “Coach” Kentera, former sports talk host at Mighty 690 & Mighty 1090

Division 9
La Salle (6-4) vs. Mayfair (6-4) at Bellflower
CalPreps really likes the Lancers in this game but both teams have had off and on seasons. They’ve beaten up on who they’re supposed to beat up on but have been hammered by the teams they needed to play better against. Traffic sucks, so we’re going with the Monsoons at home.
Mayfair 21 La Salle 20

Division 12
Verbum Dei (5-5) at Arroyo (9-1)
The biggest problem for the Knights HC, Jim Singiser is if his team looks past VD to a possible match-up with Schurr next week. Some might look at this and laugh at the idea of Arroyo looking past the Eagles. CalPreps as the Knights winning 40-6 and this isn’t the same VD program that knocked off Temple City ten years ago with Akeem Ayers. Knights quarterback Ernesto Camacho can sling it and should have success but look for Arroyo to establish the run early and build from there.
Arroyo 37 Verbum Dei 7

Division 13
Rio Hondo Prep (6-3) at South El Monte (9-1)
The Kares have all the history and a shelf full of CIF titles, but the Southmen have the bad dudes on the offensive line and a guy named Sal Tovar. It’s important for SEM to keep things tight and not give up any touchdowns via special teams or on turnovers because they are not built to come back…In the end its about Tovar & The Devil’s Herd.
South El Monte 30 Rio Hondo Prep 13

Norwalk beat El Rancho back in Zero Week. The Dons have gotten better and look primed for an upset. Dons in a surprise.

This is the price the Phantoms pay for playing in Division 3. Hart hails from the Foothill League where every game is a blood bath. Did you know that Canyon, which finished 0-5 in the Foothill, beat Burbank 34-27 back in September. Burbank was 7-3 overall and 6-1 in the Pacific. Cathedral hangs with Hart until the end but the Phantoms perfect season comes to an end.

The Bulldogs have their work cut out. They have to get on a bus and fight the traffic out to Fontana and then fight a team that went 9-1 overall and 5-1 in the Sunkist League. If West Covina can shut down Summit’s run game, it has a shot. But it’s a little too much to ask. Summit grounds and pounds.

Monrovia has the home field advantage. Monrovia has some momentum. The Wildcats have more talent. Bottom line is M-Town should win this game. But something in the gut says St. Paul pulls the upset. That Angelus League is no joke. The Swordsmen get out of town with the W.

Chino has lost four straight. Northview has won nine straight. You do the math. Sorry, Cowboy fans. I just don’t see it.