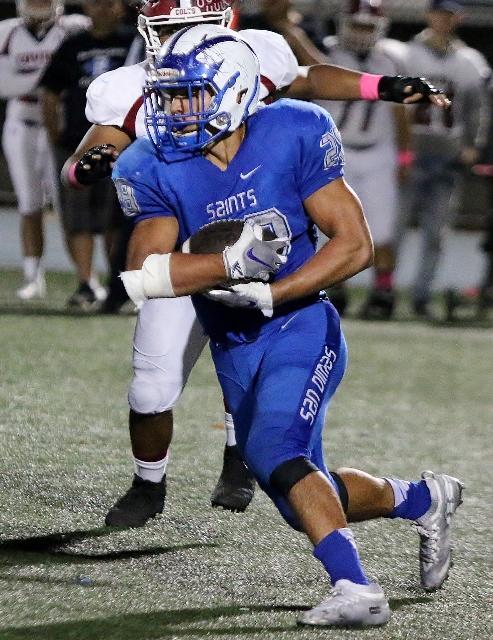 The Saints blew it open in the beginning of the third quarter scoring two touchdowns in a minute and 18 seconds. Leading 35-27 at the half San Dimas needed just three plays to go 75 yards. a 71-yard run by Matt Sloan set up a two-yard touchdown run by Rivera to make it 42-27.

On the next possession Covina’s Nin Burns II couldn’t handle a bad snap that sailed past him and was recovered by Billy Hennessy in the end zone. Only 1:18 had ticked off the clock in the third and the Saints had scored 14 points to lead 49-27. The Colts could never recover.

They only managed one more score the rest of the night on a 21-yard touchdown pass from Burns to Rudy Suarez in the fourth quarter to cut the lead to 56-34.

Rivera, who scored on a one-yard plunge early in the fourth, added a four-yard TD run with 1:23 left in the contest for his sixth of the night. Rivera’s longest run from scrimmage was 11 yards but he made them count. He had 113 yards on 25 carries.

His final score of the night capped an 18-play drive that burned up almost seven minutes and vaulted the Saints past 60.

The Saints went up 14-0 in the first quarter when Rivera finished a 10-play drive with a one-yard run and after a Covina fumble left the Saints on a short field, Nick Cuda scored on a 19- yard run.

Erik Cuellar scored twice and rushed for over 100 yards for the Colts. (Photo by Duane Barker.)

Erik Cuellar got loose for a 53-yard touchdown scamper later in the first but the Saints went up 28-7 early in the second on a 65-yard touchdown pass from Dylan O’Leary to Nick Sloan and an 11-yard jaunt by who else? Rivera.

The Saints were still up 35-20 after another Rivera short yardage touchdown run and a 13-yard scoring strike from Burns to Matthew Wells for Covina. It appeared the Saints would take that two score lead into the half. But with no time left on the clock Burns threw a hail Mary into the end zone that Suarez came down with for a 46-yard touchdown.

The Colts were down by just eight at the break and had gained some momentum but that all changed in the first 78 seconds of the third quarter.

Nick Cuda busted off a 19-yard touchdown in the first quarter and finished with 123 yards. (Photo by Duane Barker.)