True Freshman Kedon Slovis had a huge night in his starting debut for the Trojans with 377 yards passing and 3 touchdowns. (Photo by Duane Barker).

(Los Angeles) – USC went on a 42-3 run after falling behind 17-3 early in the second quarter and routed Stanford 45-20 Saturday night before 62,109 fans at the LA Memorial Coliseum.

The Trojans led 24-20 at half and shut out Stanford completely in the second half while scoring three touchdowns of their own. After a slow start the offense got rolling behind true freshman Kedon Slovis. Slovis, In his first game as a starter after replacing JT Daniels who is out for the year with an ACL injury, completed 28 of 33 for 377 yards and three touchdowns.

The Trojans scored on their first possession as they marched down to the Stanford five-yard line. The drive stalled but Chase McGrath kicked a 23-yard field goal for a 3-0 advantage. 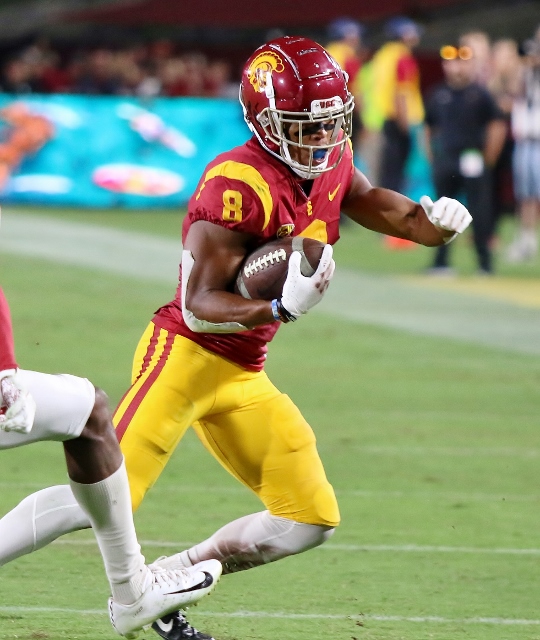 Then Stanford took control for the next quarter. The Cardinal took a 7-3 lead on its next series driving 35 yards on seven plays after a long punt return. Davis Mills connected with Connor Wedington on a 15-yard touchdown pass.

The first quarter ended with Stanford up 7-3 but the Cardinal was on the move again.

On the first play of the second quarter Cameron Scarlett finished an eight -play, 80-yard drive with a three-yard run to put Stanford up 14-3.

Thunder Keck (great name) then forced a Trojan fumble on the kick off return and Stanford took over at the USC 21. The Cardinal couldn’t take advantage with a touchdown but Jet Toner booted a 32-yard field goal to make it 17-3 with 13:47 left in the second quarter. But then the Cardinal was blitzed by the cardinal and gold.

USC answered with a six play, 75 yard scoring drive as Slovis hit St. Brown on a 39-yard touchdown pass with 11:29 left in the second quarter to get back within seven.

Toner split the uprights from 37 yards out on Stanford’s next series to go up 20-10. But again USC was quick to respond when Stephen Carr scored on a 25-yard run to cap a seven-play, 75-yard drive to cut the Cardinal lead to 20-17.

After a Stanford punt, USC struck again. Slovis moved the Trojans down the field 70 yards on seven plays and hooked up with St. Brown again – this time on a seven-yard TD toss and USC regained the lead at 24-20. The Trojans took that advantage into the half.

Toner failed on two field goal attempts on two Stanford possessions in the third quarter. He missed a 39 yard attempt and had a 47-yarder blocked.

The Trojans capitalized on the misses with a 70 yard, 7 play drive that Vavae Malepeai finished with a four-yard run. The touchdown was set up by a 30 yard pass from Slovis to Pittman. With just 41 seconds left in the third quarter USC was up 31-20. 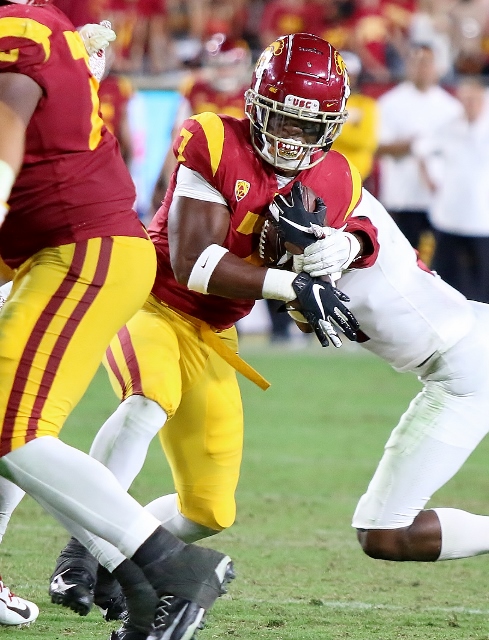 Stephen Carr did some damage on the ground with a 25-yard touchdown run in the second quarter. (Photo by Duane Barker.)

After a Greg Johnson interception set up USC at the Stanford 39, the Trojans used seven plays to get in the end zone again. Malepeai got his second of the night scoring on a six-yard run. McGrath added the extra point for a 38-20 USC lead with 10:19 remaining in the fourth quarter.

Slovis added a little gravy with a 15-yard scoring bullet to Vaughns with 6:01 left to account for the final tally.

Mills, who was playing due to starting quarterback K.J. Costello’s injury, finished with a decent line – 22 of 36 for 237 yards and a touchdown. However he was hurt by the interception by Johnson. Scarlett rushed for 82 yards and a score to lead the Cardinal ground game. But it wasn’t nearly enough on a night that belonged to a true freshman named Kedon Slovis.

USC improved to 2-0 with the victory while Stanford fell to 1-1.