(Carson) – Austin Ekeler crashed into the end zone from seven yards out to give the Chargers a 30-24 overtime win over Indianapolis Sunday at Dignity Health Sports Park to kick off the 2019 NFL season.

The Colts erased a 15 point deficit to tie it with 38 seconds left in regulation and force the overtime but the Chargers won the coin toss in OT, took the ball and never gave it back.

LA got on the board first in the opening quarter when Ty Long kicked a 22-yard field goal but Indianapolis was called for an unnecessary roughness penalty on the play. The Chargers took the points off the board and Philip Rivers hit Ekeler for a one-yard touchdown pass to complete an 11-play, 68-yard drive for a 7-0 lead.

The Colts answered with 14-play, 75 yard drive. Jacoby Brissett connected with T.Y. Hilton on a four-yard TD strike. Adam Vinateri missed the extra pojnt leaving the score at 7-6 early in the second quarter.

Rivers found Keenan Allen in the end zone for a 28-yard touchdown pass. Allen had to fight off a defender to come down with the ball. The Chargers marched 75 yards on six plays for the score with 5:58 left in the second.

Long, who replaced the injured Michael Badgley, booted a 40-yard field goal with 1:02 left in the second quarter to give the Chargers a 17-6 lead. 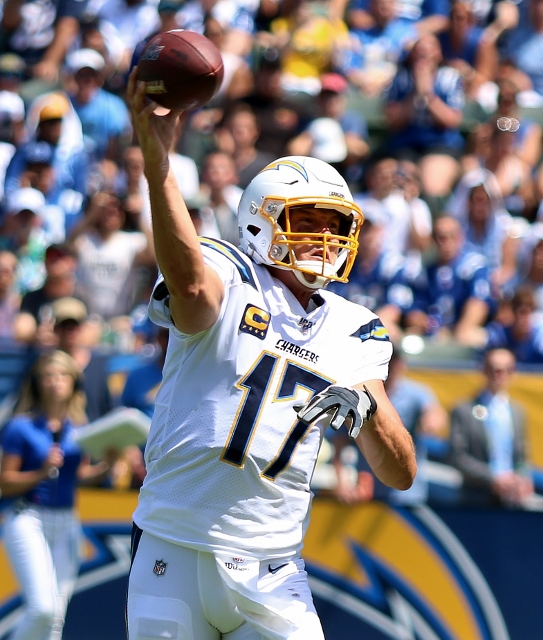 Vinateri missed a 46 yard field goal as time ran out in the first half and the Chargers took the 11 point lead into the break.

Vinateri came through early in the third quarter with a 44-yard field goal on the Colts first possession of the second half to cut the Chargers lead to 17-9.

Ekeler hauled in a pass from Rivers and busted it for a 55-yard touchdown on the next series to put the Chargers up 24-9. But the Colts immediately answered with a 55-yard touchdown gallop by Marlon Mack to make it 24-16. Yes Vinateri nailed the point after.

The Chargers muffed a punt setting up Indy at the LA 27 early in the fourth quarter. But the Chargers dodged not one, but two bullets First an apparent 11-yard touchdown pass from Brissett to Eric Ebron was nullified when it was ruled that Ebron did not have control of the ball and second when Vinateri surprisingly missed yet another field goal from 29 yards out.

The Chargers missed a golden opportunity when Malik Hooker picked off Rivers in the end zone after LA drove all the way down to the Colts six yard line. Indianapolis took over at their own 20 yard line with 8:30 left in the fourth quarter.

The Colts marched down to the Charger 18 yard line with 48 seconds left. After a timeout Brissett hit Hilton on a swing pass, who eluded two defenders and raced down the left sideline for the score with 38 seconds remaining. Mack went right up the middle for the two point conversion to tie it at 24.

The Chargers couldn’t convert on their last possession in regulation and the game went into overtime. 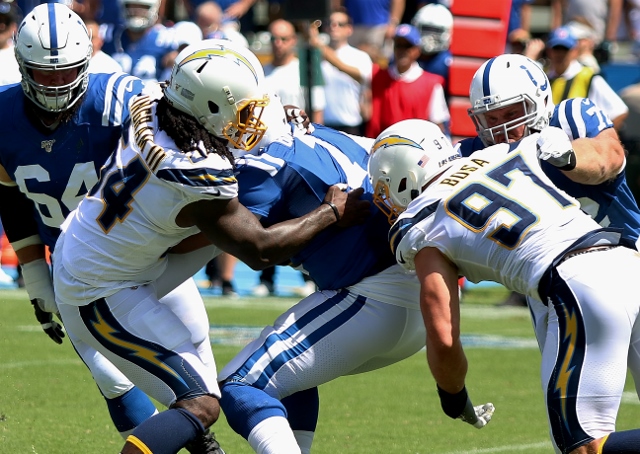 The Chargers the won the toss and that was that. They marched right down the field 75 yards on eight plays before Ekeler sent everybody home.

“We knew this was going to be game like this. That’s a great team over there and well coached by Frank Reich,” said Chargers head coach Anthony Lynn. “I’m just glad we came out on top.”

1 Comment to "Chargers Need a Little Extra to Beat Colts"