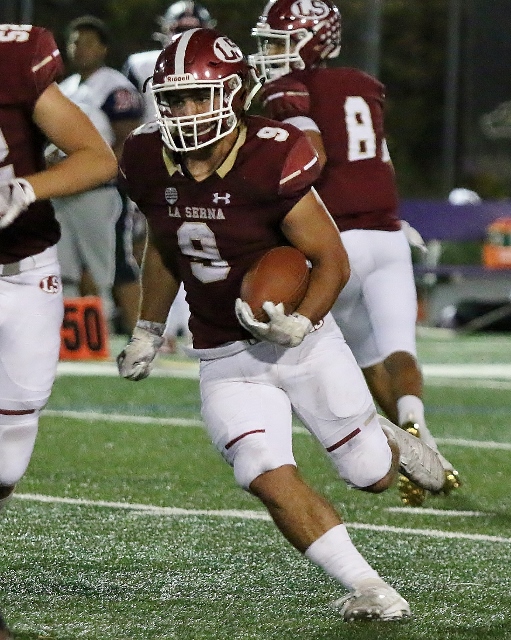 Chandler McCaffer carries the ball and La Serna to a win over Colony.

Amid the pomp and circumstance of the homecoming festivities, McCaffer and the Lancers ground and pounded their way past the Titans who had jumped out to an early 12-0 lead.

Colony quarterback Trillian Harris led his Titan teammates on a nine play 65-yard drive to start the game. Harris found Skye Roddy from 36-yards out to cap the drive.

A La Serna fumble gave the Titans the ball in good field position at the La Serna 47. Two plays later Harris found Chris Barre in the corner of the endzone for the score. Colony went for two but were turned away by La Serna.

Down 12-0 the Lancers went to work and ground out a nine play 70-yard scoring drive. McCaffer got his first taste of paydirt on a one yard plunge.

Early in the second quarter McCaffer gave La Serna the lead on a 16-yard scamper. Oh and not to mention McCaffer also kick the extra point.

The Lancers would hold on to their 13-12 advantage as the teams headed into the locker rooms at the break.

La Serna got the ball to start the second half and proceed to march down the field 80 yards on four plays for the score to pusht their lead to eight. Joey Bustos got the call to finish this drive and answered with a 27-yard run.

Later in the period it appeared that Colony would draw closer and potentially tie the game. Facing a fourth and goal at the Lancer eight, Harris’ keeper came up short that the Titans turned the ball over on downs.

Drawing from the momentum of the fourth down stop, La Serna went on a 10 play 92-yard drive that was capped by another McCaffer 16-yard run.

After the McCaffer score, Colony responed with a scoring drive of its own going 67-yards on 11 plays with Harris calling his own number and sneaking the ball across the goal line from the one.

La Serna sealed the deal with 4:27 left in the final frame. A 10 play drive was finished off by who else, McCaffer who hauled in a nine yard pass from Andrew Enriquez.

McCaffer finished the evening with 96-yards on 13 carries with three scores and hauled in on catch for nine yards and a fourth touchdown. With tired legs McCaffer was unable to get the ball through the uprights for the extra point but La Serna still led 32-19.

Joey Bustos added 65-yards on eight carries and Enriquez added another 43 on the ground to go with 126-yard passing and a lone touchdown.

On the other side of the ball Harris did most of the heavy lifting hitting on 24 of 38 passes for 300 yards and two touchdowns. He also lead the way on the ground for the Titans with 53 yards and a score.

Colony did have one last chance to get more points on the board but with :48 left to play, the Titans turned the ball over on downs when Harris’ pass fell incomplete.

6 Comments to "Lancers Get Physical With Titans"