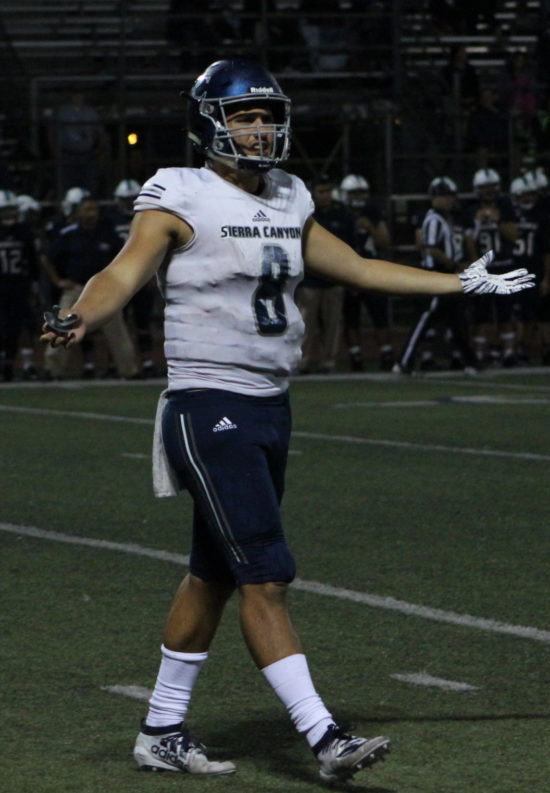 Chayden Peery threw for one score and ran for one for Sierra Canyon.

Down 28-7 St. Paul quarterback Gene Valdez scored on a 13-yard scramble to cap a 93-yard drive to cut the Sierra Canyon lead to 28-14 with 7:16 left in the fourth quarter. After the Trailblazers were forced to punt St. Paul took advantage of the opportunity.

Valdez scored again – this time on a one-yard keeper to finish a short four-play, 51-yard march. The touchdown was set up by a leaping grab of a 35-yard Valdez pass by Justin Jackson who came down with it at the three yard line. The extra point was blocked leaving St. Paul down by eight.

However there was only 1:58 left on the clock and Sierra Canyon was able to chew that up to wrap it up.

Neither team scored in the first quarter as the teams exchanged punts. Sierra Canyon drew first blood early in the second quarter when Hunter Williams scored on a three-yard run.

St. Paul answered on a three-yard TD jaunt by Trenell Ridgley to get even. Ridgley’s score was set up by a 32-yard connection from the same duo of Valdez and Jackson.

Sierra Canyon responded with a seven-play, 51 yard touchdown march. Chayden Peery kept it himself and went in from the two just before halftime for a 14-7 lead at the break. 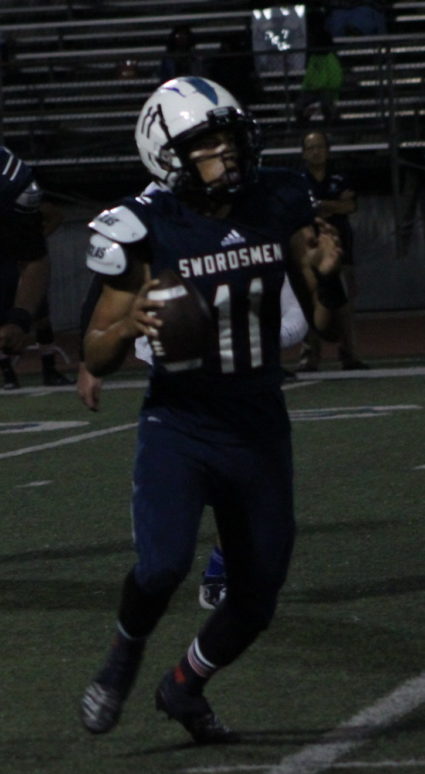 St. Paul quarterback Gene Valdez scored twice on the ground for the Swordsmen and threw for 201 yards.

The turning point in the game late in the third quarter. St. Paul muffed a Sierra Canyon punt and the Trailblazers took over at the St. Paul 11 yard line. Two plays later they were in the end zone on an 11-yard jaunt by JD Sumlin for a 21-7 lead.

Early in the fourth Sierra Canyon appeared to have iced the game away as Peery connected with JD Harvey who scooted down to the Swordsmen seven yard line and Brendon Gamble followed that up with a seven-yard touchdown catch from Valdez to put the Trailblazers up 28-7 with 11:53 left.

St. Paul had a couple more punches left and threw them in the fourth but Sierra canyon was able to withstand the blows.

Peery completed 10 of 18 for 142 yards and a touchdown for Sierra Canyon and also rushed for 48 yard and a score. Harvey caught six passes for 81 yards.

For St. Paul Valdez was 10 of 16 for 201 yards and an interception and ran for 43 yards and two scores. Ridgley led the ground attack with 107 yards and a touchdown on six carries.

Sierra Canyon improved to 4-1 with the victory and will host Bakersfield next Friday night. St. Paul fell to 3-2 and will be at home next Friday night against Los Alamitos as the non league death march continues.

“We made some mistakes but we will be there in our division,” said St. Paul assistant coach Donald Bernard.