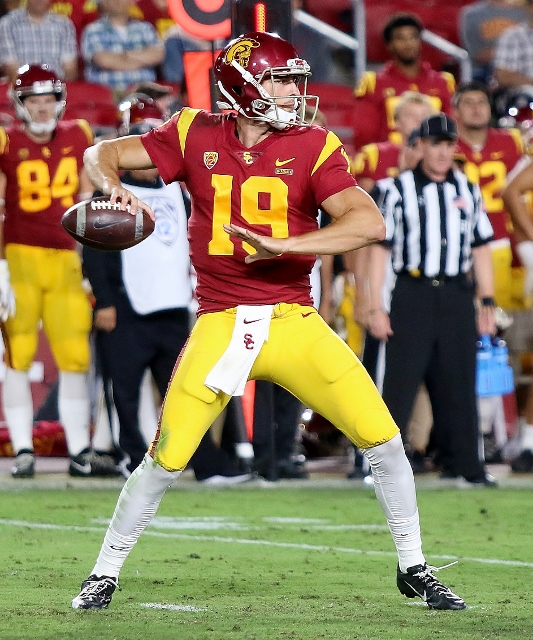 (Los Angeles) Former Glendora Tartan Matt Fink came on early to replace the banged up Kedon Slovis and led USC to a 30-23 over #10 Utah at the United Airlines Coliseum Friday night.

The Trojans had to be thanking their lucky stars that Fink was still around to take control of the offense. Fink had considered a transfer at the end of summer workouts after falling to number 3 on the depth chart. Fink finished the night hitting on 21 of 30 passed for 351-yards and three touchdowns.

Fink put the Trojans up 7-0 on a 29-yard pass to Tyler Vaughns who made a great grab in the corner of the endzone. 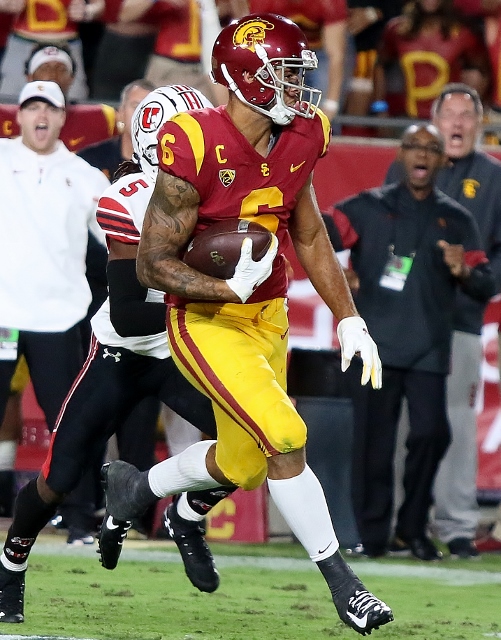 Michael Pittman Jr. on his way to a 77-yard touchdown. (Photo by Duane Barker)

It only took Utah three minutes to tie the score on a 17-yard run by Henry Cole.

With a little more that eight minutes remaining in the first quarter, Fink led the Trojans on another scoring drive. Fink escaped some pressure rolled out and fired the ball downfield in the direction of Amon-Ra St. Brown. St. Brown went up between two defenders to make the grab and get in the endzone.

After Utah cut the lead to 14-10, USC went looking for more points and got them. On a third and long from their own 23, Fink fired the ball deep downfield in the direction of Michael Pittman Jr. Pittman leaped high for the ball and took it away from two Utah defenders. With the ball secure Pittman outraced the Ute defenders to paydirt.

It was a stellar night for Pittman who hauled in 10 passed for 232 yards and a score. 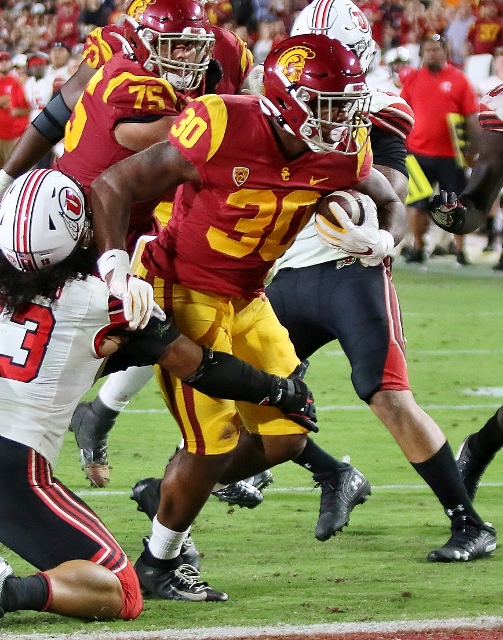 Markese Stepp puts the finishing touch on the USC win over Utah. (Photo by Duane Barker)

After the defense forced Ute quarterback Tyler Huntley into a safety, Markese Stepp finished off the ensuing drive with a four yard run.

The Trojans will now go on the road to face Washington next week before getting a bye week in advance of the yearly match up with Notre Dame on October 12.

4 Comments to "Trojans In An Upset Over Utes"