Anthony Catalano provided a spark for the Cougars throwing for two touchdowns and running for one. (Photo by Duane Barker).

Catalano replaced Tryone Williams Jr. who left the game in the third quarter with an injury, threw a pair of touchdown passes and also ran for a score. His two-yard touchdown run with 6:57 left brought the Cougars within six but that’s the way it ended as they weren’t able to get over the hump.

APU had a golden opportunity when they got the ball back with 1:29 left in the fourth quarter after the Western Oregon punter fumbled and failed to get off a kick at the Wolves 36 yard line. But the Cougars were unable to take advantage and ended up giving the ball up on downs when Catalano’s pass was bobbled out of bounds with nine seconds left.

It didn’t begin well for the Cougars. Western Oregon needed just two plays to score on its first possession. Ty Currie hit Marquis Sampson for a 47-yard strike and a 7-0 lead.

Azusa Pacific was forced to punt but got a break when the boot was muffed and the Cougars recovered at the Western Oregon 29. The Cougars moved the ball down the field and Williams scored on a seven yard run. The extra point was missed leaving the score at 7-6

Western Oregon came right back on the next possession. Mack Little capped a 51-yard drive with a one-yard run. The Wolves also missed the extra point but led 13-6. 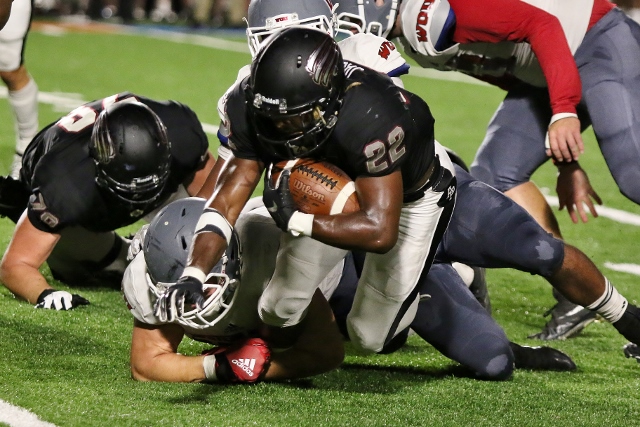 Gil’Scott Jackson picks up some tough yards on the ground. (Photo by Duane Barker).

A long punt return set up Western Oregon at the Azusa Pacific 31. On the first play of the series Omari Land went 31 yards for the touchdown run to increase the lead to 20-9 at the end of the first quarter.

Williams was popped and fumbled giving Western Oregon a great opportunity at the Cougar 11. But the Wolves weren’t able to take advantage and gave the ball up on downs.
Later in the second quarter Western Oregon missed a 40 yard field goal when a bad snap led to an incomplete pass.

Williams connected with Jasiah Richard-Lewis on a 10-yard touchdown pass with 4:11 left in the second to slice the lead to 20-16.

The Wolves immediate responded on the following drive marching 79 yards for the score. Land capped it with his second touchdown of the night on a 19-yard run with 1:12 left in the first half and they took the 27-16 lead into the half.

Western Oregon struck immediately in the second half when Currie hit Justice Murphy on a 38-yard touchdown pass to make it 34-16.

Catalano then came on for Williams and fired a 31-yard touchdown pass Darrell Adams Jr. with 58 seconds left in the third quarter.

On the next series Catalano struck again with 9 yard touchdown pass to Shane Hursh with 11:30 left in the fourth. The Cougars went for two but the pass fell incomplete.

Catalano, now starting to feel it, drove the Cougars down the field again engineering a 63-yard march capped by his own two yard touchdown scamper at the 6:57 mark. But that was as close as they got.

Western Oregon piled up 330 yards on the ground with Land leading the way with 122 yards and three touchdowns. Currie threw for 118 yards and two TDs and ran for 106.

The Cougars are still searching for their first win as they fell to 0-3. Western Oregon improved to 1-2.