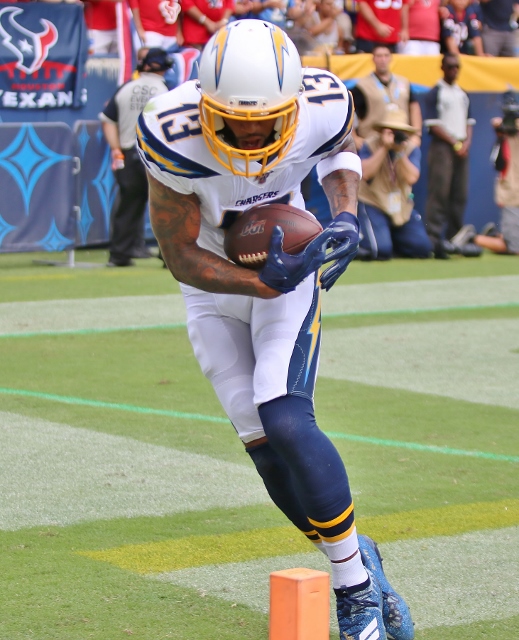 Keenan Allen had a huge day for the Chargers with 13 catches for 183 yards and two touchdowns. (Photo by Duane Barker).

(Carson) – The Chargers let a 17-7 halftime lead get away in the third quarter and fell to Houston 27-20 Sunday at Dignity Health Sports Park.

The Chargers got the ball back with just over four minutes left in the fourth quarter but weren’t able to convert and the Texans ran out the clock.

On the Texans’ first possession of the game Deshaun Watson threw an incomplete pass behind the line of scrimmage on a ball that appeared to slip out of his hand. Desmond King II recovered it and returned it to the Houston 15. It was ruled a fumble and LA took over. Philip Rivers then fired a seven yard touchdown strike to Keenan Allen for a 7-0 lead early in the first quarter.

The Chargers maintained that touchdown lead after one.

Watson hit on a flea flicker play to Kenny Stills that moved the ball down to the Charger 14. From there he connected with Darren Fells on a 16-yard scoring strike with 8:11 left in the first half to cut it to 10-7. 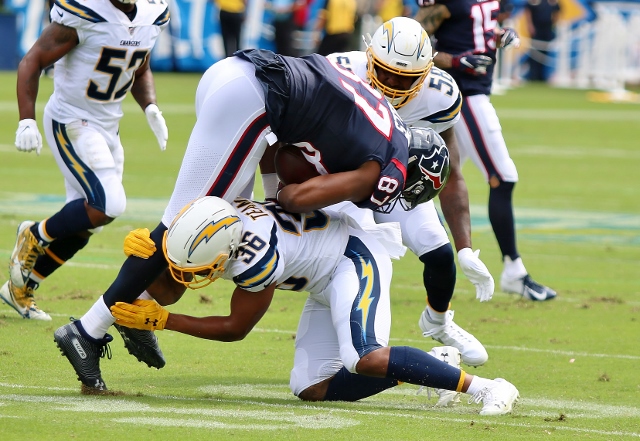 The Charger defense lays the wood to a Houston receiver. (Photo by Duane Barker).

The Chargers drove 89 yards in 12 plays with Rivers hitting Allen on a 12-yard TD pass late in the first half. LA took the 17-7 lead into the break.

In the second half, Houston marched 55 yards in 8 plays highlighted by a 32 yard pass from Watson to Will Fuller down to the three yard line. Carlos Hyde scored on a three yard run to cut the Charger lead to 17-14 with 7:31 left in the third.

The Chargers moved the ball down to the Houston 27 yard line but Rivers was popped and coughed up the ball and the Texans recovered.

They took advantage using six plays to go 73 yards. Watson hit on a big a to Deandre Hopkins deep in Charger territory and then followed it up with the 15 yard TD strike to  Akins for a 21-17 lead with 1:19 left in the third.
In the fourth quarter, Watson scrambled out of trouble and found Akins over the middle and he did the rest on a 53-yard touchdown catch and run to put Houston up 27-17 with 9:40 left in the fourth quarter.

After a Houston punt, the Chargers got the ball back at their own 28 yard line. Then they marched own to the Houston 34 but they turned it over on downs with 11 seconds remaining.
The Texans ran out the clock to win it.to

The Chargers fell to 1-2 while Houston improved to 2-1.