Joey Bustos and the Lancers run over El Rancho.

(Whittier) The La Serna Lancers and the El Rancho Dons opened up Del Rio League play Friday night and the Lancers completely dominated the game on both sides of the ball to the tune of a 49-7 victory at Sandy Thortson Stadium on the campus of Cal High.

The Lancers got their first score with 3:21 left in the first quarter on the legs of Micheal Quinones. Quinones got the ball on a sweep to the right and worked his way into the endzone from 15-yards out. Chandler McCaffer missed the extra point but La Serna led 6-0

Just a few minutes later the Lancer struck pay dirt again on a 16-yard pass from Andrew Henriquez to Atallah Shalash. La Serna went after the two-point conversion and completed it on a pass from Henriquez to McCaffer. The score was set up when Aaron Young picked off Chris Andrade at the El Rancho 19.

The Lancers only needed one play to put more points on the board. Set up with good field position at their own 49, La Serna used a bit of razzle dazzle on a reverse that Jake George turned into a 49-yard scoring strike to Milo Lopez. With the McCaffer extra point the Lancers had 21-0 lead with 10:37 still showing in the second quarter. 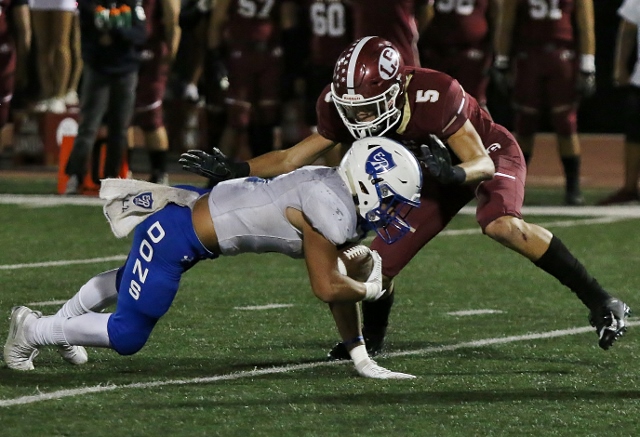 The third quarter was more of the same as La Serna scored three more times on a 20-yard run by Joey Bustos, a 4-yard McCaffer run and Salash’s second touchdown reception from Henriquez.

The Lancers completed their scoring barrage with 8:36 left in the final frame. Steve Pinales got loose on a 56-yard burst to paydirt. Pinales led La Serna on the ground with 94-yards on five carries.

The lone highlight for El Rancho came after the game was already out of reach. Andrade found Brett Vatco deep down the field on the post route for 50-yards and the score.

While La Serna kept the Don’s air attack in check, they also did a stellar job holding El Rancho’s Roman Rojas to just 40-yards on 17 carries.

The Lancers will be back at Sandy Thortson Stadium next week on the vistor’s side as they take on rival California High. El Rancho will be on the road again at Pioneer High School to pay a visit to host Whittier High School.