By Tim Peterson
(Los Angeles) – Oregon went on a 56-7 run after falling behind 10-0 in the first quarter and went on to rout USC 56-24 Saturday night before 63,011 at United Airlines Field at the Los Angeles Memorial Coliseum.

The Trojans started off fast but were eventually done in by a slew of penalties, mistakes and turnovers and were buried by the third quarter.

USC drove 77 yards on 16 plays on the opening possession as Kedon Slovis hit Drake London on an eight-yard touchdown pass to finish the march for a 7-0 lead with 9:15 left in the first quarter.

Oregon’s Justin Herbert was intercepted later in the quarter by Isaiah Pola-Mao and he brought it back to the Oregon eight yard line. The Trojans stalled at the six but Chase McGrath kicked a 24-yard field goal for a 10-0 advantage.

Trojans were up 10-0 after one and all was good. Then things began to turn.

Veron McKinley III picked off Slovis early in the second quarter and returned it to the Oregon 41. The Ducks took advantage of the turnover when Herbert scored on a ten-yard run seven plays later to cut the USC led to 10-7. The drive was aided by two USC penalties of targeting and holding.

USC, helped along the way by two Oregon unsportmanslike conduct penalties, moved the ball down to the Oregon five -yard but Slovis was hit and fumbled and the Ducks recovered to end the threat.

Oregon took the lead for good at 14-10 late in the second quarter marching 92 yards on nine plays. Jaylon Redd capped the march with a three-yard run. USC again contributed to the cause with costly penalties.

On the next possession Brady Breeze stepped in front of a Slovis pass and returned it 32 yards for a pick six for a 21-10 lead with 2:16 left in the second quarter. 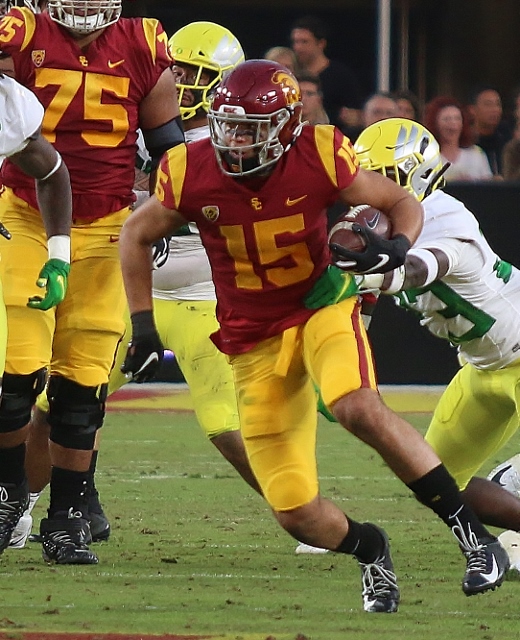 Drake London had one of the few bright spots for USC. (Photo by Duane Barker)

USC put together a nine play, 74 yard drive with Michael Pittman Jr. hauling in a nine-yard touchdown pass from Slovis to make it 21-17. That was the last Trojan score until late in the fourth quarter.

Oregon immediately answered as MyKeal Wright returned the ensuing kick off 102 yards for a touchdown with eight seconds left in the second quarter.
Oregon took the 28-17 lead into the locker room at halftime.

Hebert hit Juwan Johnson for a 15-yard touchdown pass to cap the Ducks first drive of the third quarter to increase the lead to 35-17. The Ducks went 80 yards on seven plays.

Slovis was intercepted for the third time on the next series as Salesian’s own Deommodore Lenoir picked it and returned it to the USC 34.

Herbert then found Johnson again for a score, this one covered 11 yards to put the Ducks up 42-17 with 6:14 left in the third.

Early in the fourth quarter the Herbert-Johnson connection clicked again on a 37-yard touchdown pass to put Oregon in cruise control at 49-17.

Later in the quarter Mycah Pittman had a catch and run on a 35-yard TD pass from Tyler Shough, who had come on for Herbert.

The Trojans put one more on the board for the final score of the night when Slovis threw a 20-yard touchdown pass to Kyle Ford.

Slovis finished the night 32 of 57 for 264 yards and 3 touchdowns but was hurt by the 3 interceptions. Tyler Vaughns had 8 receptions for 75 yards. USC never could get the running game going and finished with just 91 yards on the ground.

Oregon, ranked number 7 overall coming in, improved to 8-1. The Trojans fell to 5-4 with three games remaining.

Hasbro Gaming Guess Who? Game Original Guessing Game for Kids Ages 6 and Up for 2 Players

(107)
$7.12 (as of n/a - More infoProduct prices and availability are accurate as of the date/time indicated and are subject to change. Any price and availability information displayed on [relevant Amazon Site(s), as applicable] at the time of purchase will apply to the purchase of this product.)

(837)
$32.99 (as of n/a - More infoProduct prices and availability are accurate as of the date/time indicated and are subject to change. Any price and availability information displayed on [relevant Amazon Site(s), as applicable] at the time of purchase will apply to the purchase of this product.)

(19011)
$9.08 (as of n/a - More infoProduct prices and availability are accurate as of the date/time indicated and are subject to change. Any price and availability information displayed on [relevant Amazon Site(s), as applicable] at the time of purchase will apply to the purchase of this product.)
Posted in College | Tagged Oregon Football, USC Football