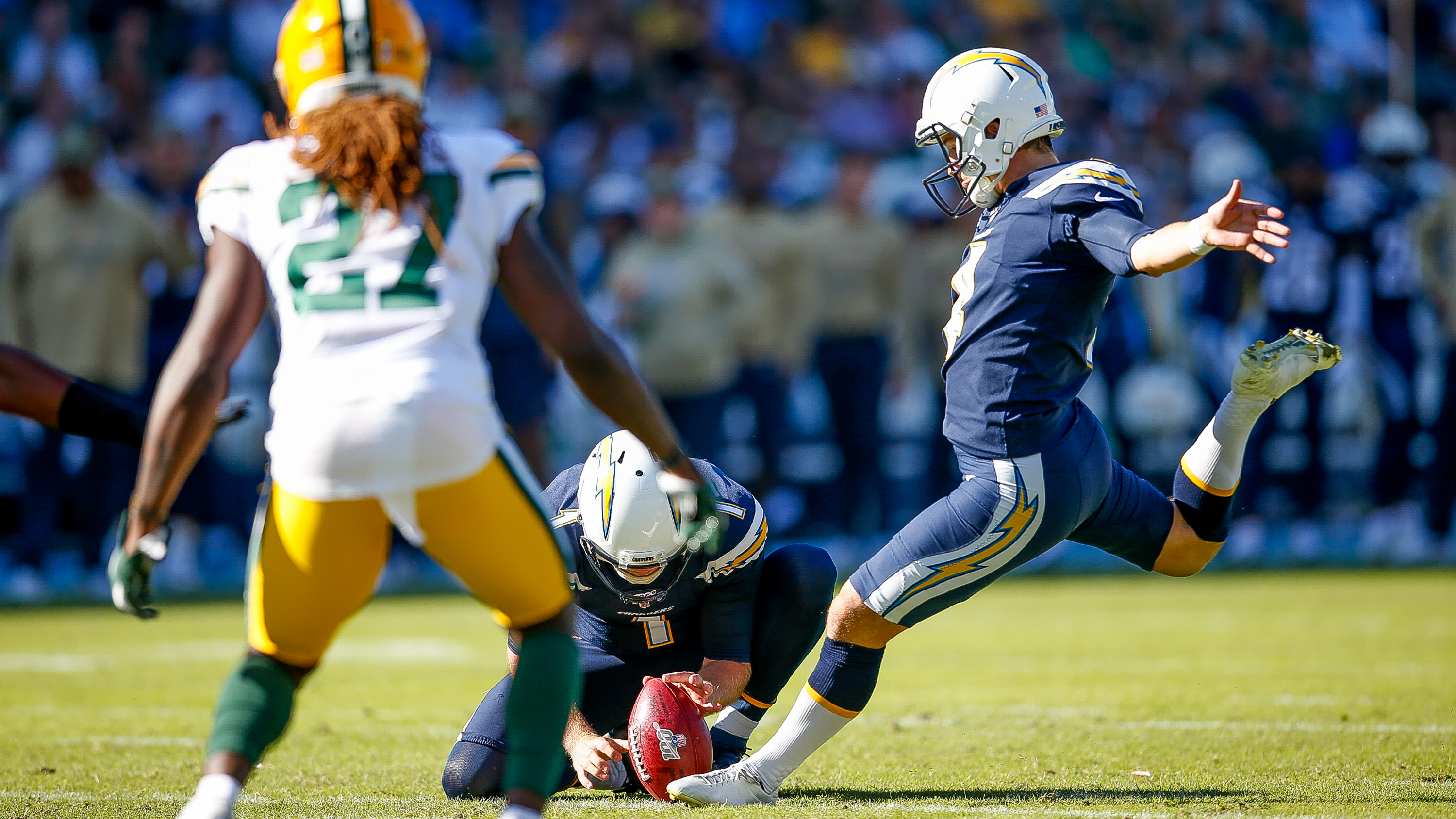 (Carson) – The Chargers used four Michael Badgley field goals and a couple of second half touchdowns to beat Green Bay 26-11 Sunday at Dignity Health Sports Park before a large contingent of Packer supporters.

The Chargers seemed to playing on the road at times as the stadium was riddled with Packer green and went silent when the Chargers forged a lead.

The Chargers opened the game at their own five yard line but marched down the field before stalling at the Green Bay 11. Badgley stated what became a pattern as he kicked 29-yard field goal to make it 3-0.

After a Packers punt Philip Rivers connected with Mike Williams for a 57-yard pass play down to the 12. Green Bay held but Badgley booted a 40 yard field goal for a 6-0 lead with 1:04 left in the first quarter.

Both offenses had trouble getting any momentum. As the clock ran out on the first half Badgley kicked his third three-pointer of the game, a 34 yarder to make it 9-0 Chargers at the half.

The Packers received the kickoff to start the second half but they went three and out again. The Chargers took over and worked their way up the field and then went to Badgley again. He responded with a 43-yard field goal for a 12-0 lead.

On the next possession the Chargers blocked the punt by Green Bay’s JK Scott and it ended up traveling just eight yards. LA took possession at the Packer 27. Five plays later Melvin Gordon cashed in with one-yard run to cap the short drive for a 19-0 advantage.

The Packers fnally got on the board with 46 seconds left in the third quarter on a 54-yard field goal by Mason Crosby.

LA answered as Rivers hit Williams on a 46 yard pass play down to the Green Bay as time ran out on the third quarter.

Early in the fourth quarter Badgley had kicked his fifth field goal of the game but the Chargers took the points off the board when a Green Bay offsides penalty gave them a fourth and goal at one yard line. Gordon then crashed in the endzone to make it 26-3.

Aaron Rodgers then led the Packers on a scoring drive. He hit Jamaal Williams for a 10-yard touchdown pass and then Rodgers ran it in himself for a two-point conversion to cut the LA lead to 26-11 with 6:21 left in the contest.

The Chargers were able to burn four minutes off of the clock before Badgley missed his first field goal of the day from 44 yards out with 2:10 left. Green Bay was forced to turn the ball over on downs on its last possession.

The Chargers defense was the story of the day. They held Rodgers to 161 yards passing as he completed 23 of 35 with a touchdown. The Packers had only 45 yards rushing. Rivers finished 21 of 28 for 294 yards with no touchdowns or interceptions. Gordon (80 yards on 20 carries) and Austin Ekeler combined for 150 yards on the ground. The Chargers had 159 overall.

Melvin Ingram and Joey Bosa each had 1.5 sacks to lead the Charger D. Bosa also had 4 tackles.

It was the second straight win for the Chargers as they improved to 4-5. Green Bay dropped to 7-2.