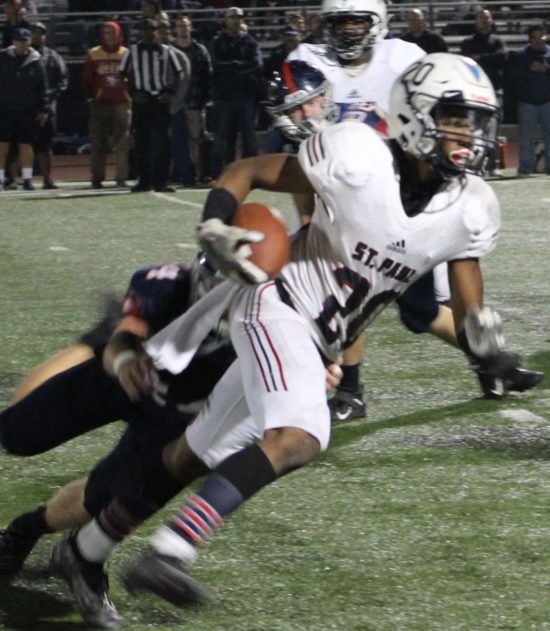 Trenell Ridgley rushed for 205 yards and 3 touchdowns for the Swordsmen.

One more from last year for “One Year Ago”. Tim Peterson watched St. Paul pick up a big win over Yorba Linda to advance to the Division 5 semi finals. Tenell Ridgley had a field day on November 15, 2019.

By Tim Peterson
(Placentia) – Trenell Ridgley rushed for 205 yards and three touchdowns to lead St, Paul to a 28-16 win over Yorba Linda Friday night at Bradford Stadium at Valencia High School to advance to the CIF Division 5 semi finals.

Ridgley did it all for the Swordsmen as he also intercepted a pass and turned it into a pick six in the fourth quarter but it was called back due to a rouging the passer penalty.

Ridgley got the Swordsmenr started on their first drive of the game carrying the ball eight times for 50 as St. Paul marched 70 yards on 11 plays with Gene Valdez scoring on a keeper from three yards out for a 7-0 lead.

Early in the second quarter Ridgley hit paydirt on a four-yard run to cap an 11-play, 81-yard drive to give the Swordsmen a 14-0 lead.

St. Paul was forced to punt on its next two possessions and Yorba Linda took advantage when Tyler Kolvalcin got to the corner and raced down the far sideline for a 35- yard touchdown jaunt.

The Swordsment took the 14-7 lead into the break at halftime. Early in the third St. Paul pieced together a nine-play, 91-yard drive. Ridgley got his second of the night on a nine-yard run.

Yorba Linda made it interesting late in the third quarter when Luke Gigliotti scored on a one-yard run to cut it to 21-14.

St. Paul put it away in the fourth when Ridgley capped his evening with the biggest play of the game. With just over six minutes left in the contest he ran right through the Yorba Linda defense and outran the secondary for a 78-yard TD dash. The touchdown run put the game on ice.

Ridgley had the interception for the touchdown on the next possession but it was nullified by the penalty.

The Mustangs scored a safety late in the game when St. Paul intentionally hiked the ball over the punter’s head for the two points rather than kick from its own endzone.

For Yorba Linda the offense never did click. Quarterback Gio Micallef threw for just 56 yards and the Mustangs managed 159 yards on the ground.

“That was our plan to pound the ball That’s what we do,” Ridgley said. And Ridgley and St. Paul did it very well piling up 320 yards on the ground overall.

While the season ends for Yorba Linda the road continues for St. Paul. The Swordsmen will be on the road next week at Culver City in the semis.

3 Comments to "One Year Ago: Swordsmen to Semis!"