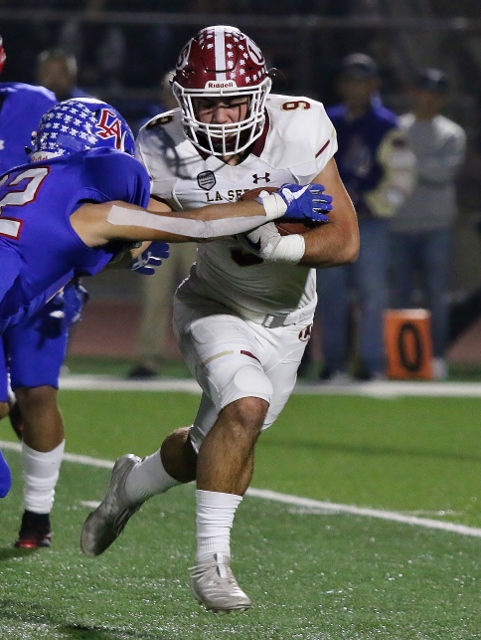 Our “One Year Ago” series moves into the second round of the playoffs. Duane Barker was on the sidelines to cover a good local matchup at Los Altos as the Conquerors battled La Serna. The Lancers had a little too much for the Conqs in the game played on November 15, 2019.

(Hacienda Heights) The La Serna Lancers held the Los Altos Conquerors to 129 yards of total offense and just one lone offensive score and beat their hosts 28-14 Friday night in the second round of the CIF Division VI Playoffs.

The Conquerors did get a special teams score on a Rene Zaldivar 75-yard kick off return but for the most part the Los Altos offense was kept in check by a stout La Serna defense.

The Lancers wasted no time getting on the scoreboard. After a solid kick return to their own 43, La Serna only needed four plays to get into the endzone. Chandler McCaffer got the call from 13 yards away and then added the extra point for the 7-0 lead with just under two minutes gone in the game.

After a four and out by Los Altos , the Lancers got the ball back on their own 15. Another four plays later La Serna found paydirt again on a 44-yard strike from Andrew Henriquez to Atallah Salash with CIF Title winning quarterback Frankie Palmer looking on. McCaffer was good again on the extra point.

La Serna extended their lead to 21-0 on their next drive. McCaffer got his second touchdown of the night with 1:13 left in the opening frame on a three yard run capping a 7-play 73-yard drive. 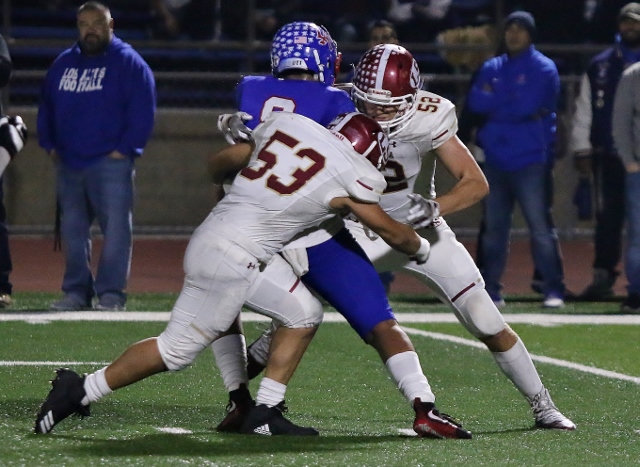 The La Serna defense lived in the Conqueror backfield.

Zaldivar’s explosive 75-yard touchdown return came on the ensuing kickoff. Zaldivar fielded the kick on the far side of the field at his own 25, picked up a couple blocks and made his way across the field. After picking up a couple more blocks in front of his own bench, Zaldivar did the rest himself outracing the Lancer defenders.

La Serna maintained their 21-7 advantage for the rest of the half an through the entire third quarter.

Milo Lopez provided a defensive spark for the Lancers early in the fourth when he picked of a Justin Gaytan pass at his own 14. From there Henriquez guided La Serna on a 12 play 86-yard drive that McCaffer finished off with his third touchdown on the night. McCaffer finished the night gaining 159-yards on 19 carries with the the three scores.

Los Altos got their lone offensive score with 5:18 left to play in the game. They only needed one play to get it done when Gaytan found Zaldivar over the right side and Zaldivar exploded past the La Serna defense 61-yards to paydirt. Jacob Gonzalez added the extra point to cut La Serna’s Lead in half.

Los Altos lined up for an obvious on-side kick but Gonzalez’s kick sailed out of bounds at the La Serna 38.

The Lancers ran the the ball and the clock out as far as they could but left :06 on the clock when a Henriquez pass fell incomplete. Henriquez amassed 231 total yards on the evening 134 through the air and 97 on the ground.

With just a few ticks left, Gaytan dropped back to pass and fired the ball deep but the pass flew out of bounds to end the game.

La Serna will now take on San Jacinto in the semi-finals of the CIF Division VI playoffs.

(13022)
$8.99 (as of n/a - More infoProduct prices and availability are accurate as of the date/time indicated and are subject to change. Any price and availability information displayed on [relevant Amazon Site(s), as applicable] at the time of purchase will apply to the purchase of this product.)

(98435)
$149.99 (as of December 4, 2020 - More infoProduct prices and availability are accurate as of the date/time indicated and are subject to change. Any price and availability information displayed on [relevant Amazon Site(s), as applicable] at the time of purchase will apply to the purchase of this product.)

Trouble Board Game Pop-o-Matic Dice Roller Includes Power Die and Shield to Amp Up The Fun, Game for Kids Ages 5 and Up, 2-4 Players (Amazon Exclusive)

(69)
$12.99 (as of n/a - More infoProduct prices and availability are accurate as of the date/time indicated and are subject to change. Any price and availability information displayed on [relevant Amazon Site(s), as applicable] at the time of purchase will apply to the purchase of this product.)
Posted in High School Football, High School Sports

2 Comments to "One Year Ago: La Serna Impressive In Second Round Win Over Los Altos"