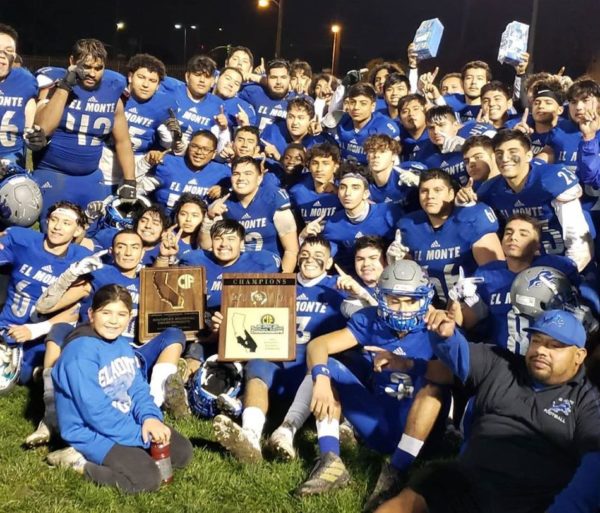 After watching El Monte punch their ticket to play for a state title Friday night, the biggest thing that I took away from it was there is no team in the San Gabriel Valley that has more heart than the Lions of El Monte.

The final score read 30-18, but if you were at the game, some would say that Serra got lucky that only 30 was scored and not more. The Lions’ offensive line had their way with the Conquistadors as the game played out.

“Shoutout to my online, man. They work hard in the weight room, they push the defenders back so that we can find the hole and hit it,” said Davon Booth after the game.

By halftime, it was hard not to notice that Serra’s front four was drained, and by then it was too late. Both Booth and Abel Cueva made big plays in the second half that proved to Serra, the fans, and the city of El Monte that they have a bigger heart, and with that, no one can beat them.

Playing in front of a sold-out audience, in and outside the stadium, they had determination, confidence, and again, heart. When Serra of San Diego scored on its first possession, that was the only time the Lions trailed. They answered right back on their ensuing offensive series and continued to deliver a healthy dose of Booth and Cueva.

That work shows why the team hasn’t lost all season while they blow by every opponent that came their way.

Just because this win adds to what is known as the best season in school history, but also, this is a win that put the city on the map when it comes to Southern California football.

“It means a lot. We’re putting the city on the map. A lot of alumni come from different schools and celebrating us. It’s a blessing,” Booth added.

El Monte used to be a no-name program that everyone scheduled against because they knew it was an easy win. Now, no one wants to play the Lions just so that 50 points won’t show on the scoreboard after 48 minutes of play.

They are respected by opponents, feared by those who won’t schedule them and loved by the city.

The Lions will travel up north to Crescent City next week, where they will try to etch their names as a state champion.

The game will be played, and the heart of El Monte will be there playing along with them.