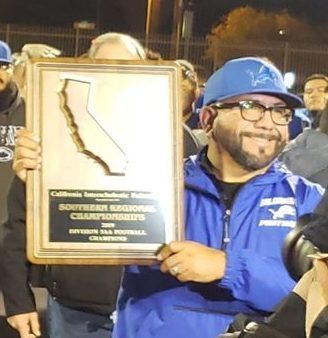 El Monte’s Jesse Ceniceros is the 2019 Mid Valley Coach of the Year.

Man, this was a tough decision. Jesse Ceniceros led El Monte to an undefeated record, a Division 12 CIF title and ultimately a State title which was won on the California-Oregon border. Yeah, real tough.

The Lions were perfect from the get go. They rolled through their non-league schedule scoring 141 points in their first two games. Then they ripped through the Mission Valley League with their only test being a 26-21 win over Arroyo on October 11.

Many people thought El Monte’s downfall would come in the post season. Never happened. Jurupa Hills was a battle but the Lions emerged with a 22-15 victory in what turned out to be a for the CIF championship when Adelanto was disqualified due to a brawl in its game with Orange Vista.

There were still some non-believers so to solidify their place in history, the Lions went out and beat Serra (San Diego) in the Bowl playoffs and then traveled 750 miles up to Crescent City to take care of Del Norte 32-7 for the State championship.

Ceniceros did it by perfecting a double-wing offense that was devastating for opponents but that was only a part of it. He did it in so many other ways as well. He did it by instilling pride, fight, and grit into a group of young men that were hungry for a championship. And Cencieros fed them the recipe for success. By the time the playoffs started the El Monte Lions were a team that believed they could not lose. And in 2019 they couldn’t.

Jesse Ceniceros is our Mid Valley Sports Coach of the Year.