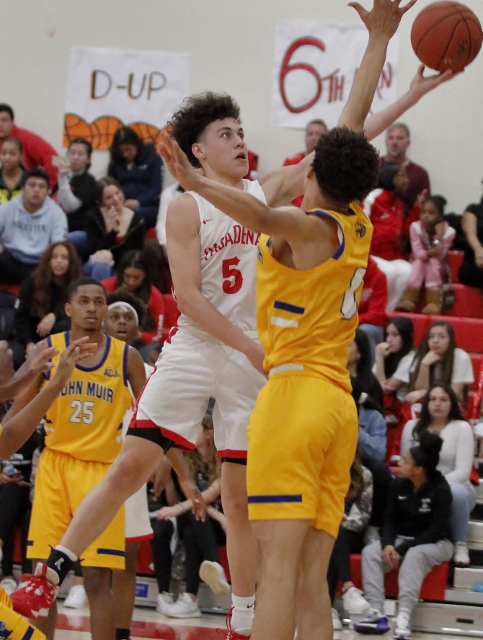 By Tim Peterson
(Pasadena) – Pasadena jumped out to an 18-8 first quarter lead and maintained control the rest of the way in a 67-51 win over visiting Muir Thursday night.

With the victory the Bulldogs won or shared the Pacific League title for the 16th consecutive season. Pasadena shared the title this year with Crescenta Valley as both teams finished 13-1. The teams both beat each other on their home floor.

Pasadena swept the Rose City Rivalry with Muir, also having beat the Mustangs 72-60 at Muir in January.

Pasadena stretched the lead to 17 by halftime and eventually led by 20 in the third quarter before settling for the 16 point victory.

Nigel McKay had 11 points and 4 rebounds off the bench. (Photo by Duane Barker).

Devon Lewis led the way for the Bulldogs with 16 points including 9 in the third quarter. Davian Brown had 15 points, 12 rebounds and 6 assists and Nigel McKay had 11 and 4 boards off the bench. Zavier Smith provided a spark as well with 9 points and 6 rebounds and Dutch Richard added 8. Au’dante Bailey had 8 points off the bench including 6 in the fourth quarter.

Assad Muhammad and Joseph Dollaway combined for 29 points for Muir with 15 and 14 respectively and Ethan Fleming added 9. Khamron Cantrell scored 8 for the Stangs down low.

Pasadena finished 20-8 overall and now looks forward to the CIF Division 1 playoffs. Muir finished 7-7, tied for fourth in the Pacific, and 12-16 overall.