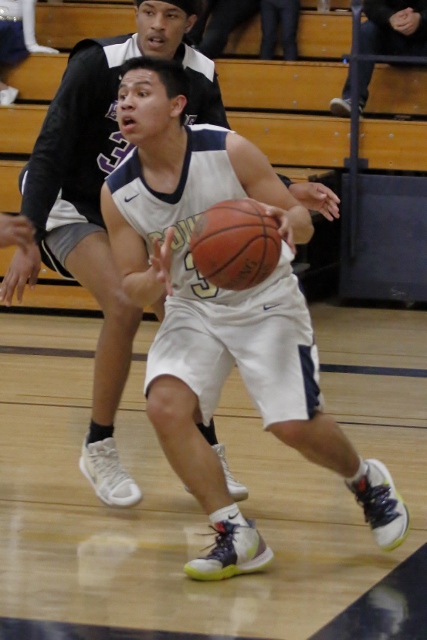 Josue Ramirez led the Eagles with 20 points but they came up short. (Photo by Duane Barker).

Our “One Year Ago” series continues as the Boys Basketball CIF playoffs got underway. South El Monte had a perfect season in the MVL but couldn’t hold off Eastside in the first round of the Division 4A playoffs on February 14, 2020.

By Tim Peterson
(South El Monte) – South El Monte rallied from a 12 point first quarter deficit to take the lead at halftime but the Eagles fell short in the end in a 67-62 loss to Eastside Friday night in the CIF Division 4A playoffs.

Leading 49-47 heading into the fourth quarter South El Monte was outscored 20-13 by Eastside in the final frame to take the five point loss. Robert Felix knocked down a pair of threes in the fourth quarter for South but Eastside with a balanced attack had enough to hold off the Eagles.

South El Monte looked like they were on the verge of getting blown out in the first quarter as Eastside buried four three pointers in the quarter to lead 23-11 after one. Josue Ramirez scored five in the quarter for South El Monte but the Eagles had a big hill to climb.

They climbed it in the second with their biggest quarter of the night. The Eagles outscored Eastside 20-6 in the period as Ramirez scored nine points and Joshua Medina added six. South took a 49-47 lead into the break. 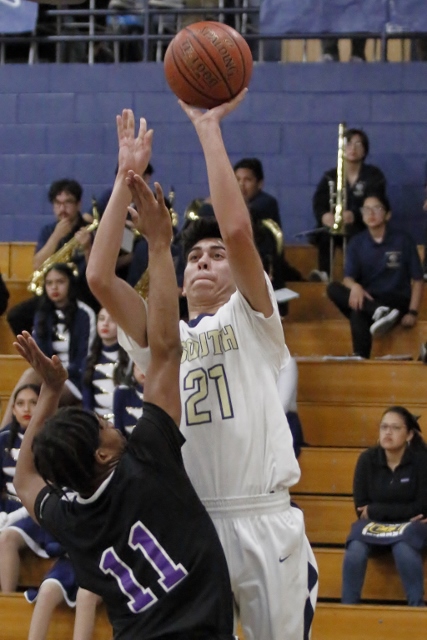 Joshua Medina tossed in 17 for South. (Photo by Duane Barker).

They maintained the lead throughout the third quarter. Medina had seven in the quarter and Josue Ramirez and Kevin Ramirez each hit threes to give SEM the two point advantage heading into the fourth.

Eastside made the plays down the stretch however and advanced to the third round.

Josue Ramirez led the Eagles with 20 points and Medina scored 17. Kevin Ramirez had nine and Adrian Diosdado and Felix each contributed eight.

South El Monte can still boast about a Mission Valley League title going a perfect 12-0 in league. The Eagles, who earned a bye in the first round, finished the season 20-8 overall.

4 Comments to "One Year Ago: South Ousted by Eastside"