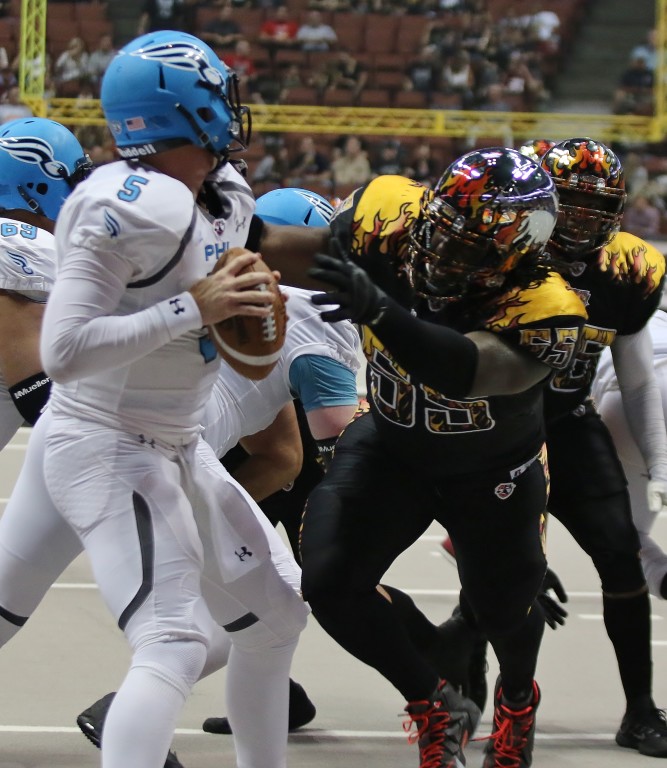 Marcus Pittman gets one of the few pressures on Soul quarterback Dan Raudabaugh. (Photo by Duane Barker)

(Anaheim) – The LA KISS fell behind 35-21 at halftime and could never recover in an eventual 56-33 loss to Philadelphia Monday night before 6,193 at Honda Center.

The KISS was hurt by turnovers with two interceptions and they were stopped on fourth down on a couple different occasions. Defensively it was a struggle as well as they failed to get stops throughout the contest.

In the first quarter, Donovan “Captain” Morgan hauled in a 30-yard touchdown pass from Nathan Stanley on the KISS’ first possession and Stanley then hit OL Colin Madison for a short TD pass on the next series. But Philadelphia scored twice on a pair of touchdown passes by Dan Raudabaugh of 28 and 32 yards to Shaun Kauleinamoku to keep it tied after one.

Raudabaugh struck again on a TD toss to Darius Reynolds to open the second. The turnover bug then bit LA when Tracy Belton picked off Stanley on the next series and returned it 18 yards for a pick six to put Philly up by two scores. The KISS turned the ball over on downs and the Soul found the endzone again when Raudabaugh and Kauleinamoku again connected for the third time – this time for six yards to put the Soul up 35-14. 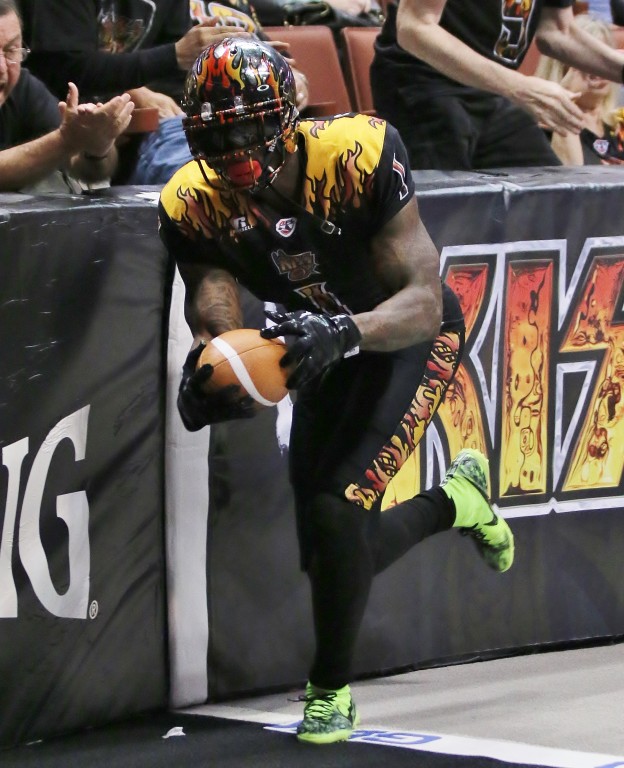 As usual Donovan Morgan was one of the lone bright spots for the Kiss. (Photo by Duane Barker)

Stanley scored on a one-yard keeper with 17 ticks left in the half to make it 35-21 at the break.

The KISS again was halted on fourth down to open the third quarter and the Soul made them pay as Raudabaugh found Reynolds again for a score for a 42-21 advantage. 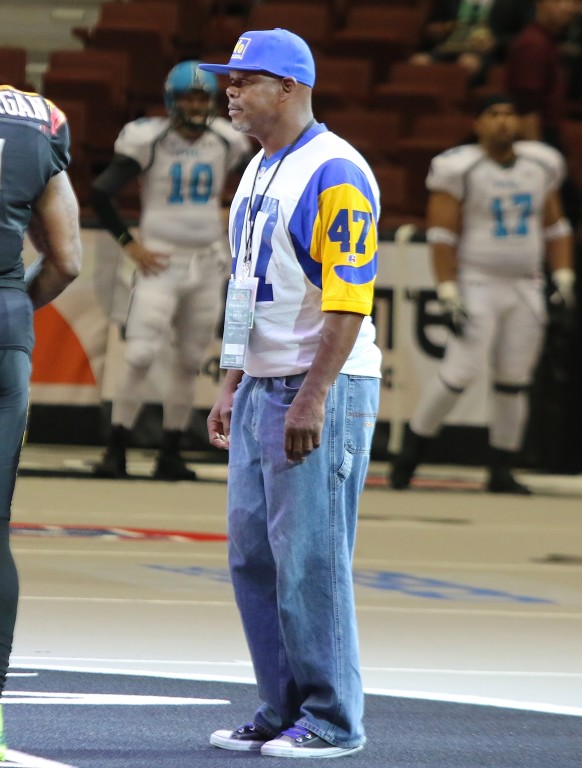 Former Ram defensive back Leroy Irvin was on hand for the coin flip. (Photo by Duane Barker)

Stanley was picked on the ensuing series but the Soul gave it right back on a fumble and Jamil Merrell returned it all the way back to the Philly seven-yard line. Morgan, who was helped off the field the previous series, returned to catch a seven-yard TD strike from Stanley but the extra point attempt was missed to cut the lead to 42-27 early in the fourth quarter.

The Soul answered with Raudabaugh’s sixth TD pass of the night as he hooked up with Reynolds again on a 13-yard touchdown pass for a score. For Reynolds it was his third of the contest.

KISS defensive back Rayshaun Kizer was injured on the kickoff and helped off the field. His status was still uncertain after the game.

Morgan ran under a Stanley pass for a 40-yard touchdown pass as the KISS tried to stay alive down 49-33 with 1:05 left in the fourth.

However, the Soul as they had all night, responded again as Jeramie Richardson bulled in from the one-yard line late in the contest to seal the 23 point victory.

Raudabaugh finished 18 of 26 for 250 yards and six touchdowns with no interceptions. Reynolds had 10 catches for 134 and three TDs while Kauleinamoku had six receptions for 96 yards and three scores.

Stanley completed 18 of 41 for 191 yards and four touchdowns but was hurt by two picks. Morgan was again the go to guy for the KISS (in other news, it’s sunny in Southern California) with seven receptions for 106 yards and three touchdowns.

The KISS fell to 2-3 with the loss while Philadelphia improved to 4-1. Next up for the KISS is a home game next Monday night against Portland. The game was moved from Portland to Anaheim due to a scheduling conflict with the Portland Trailblazers of the NBA.