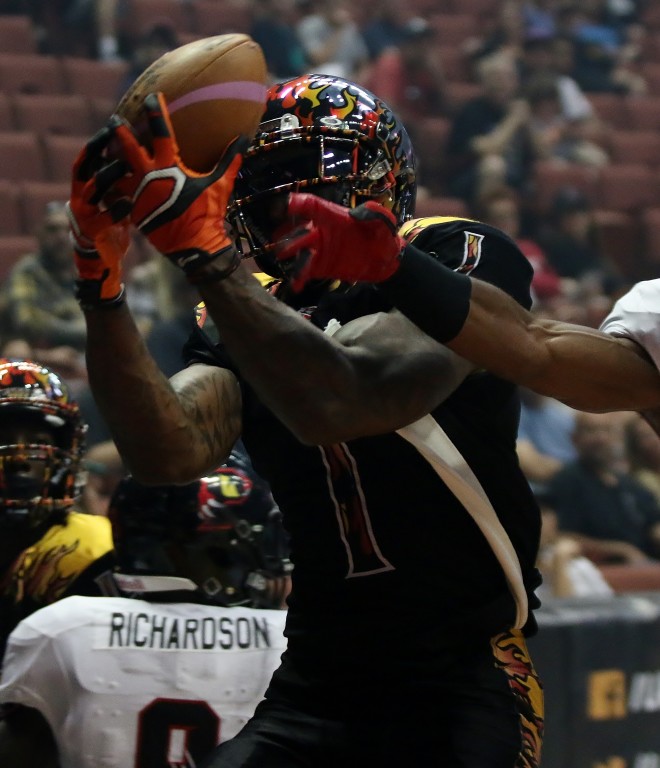 (Anaheim) – The LA KISS lined up for a 51 yard field goal with four seconds remaining and the score tied at 41. The kick could have been a game winner for the KISS but instead the game was lost when the ball was snapped over the head of the holder and rolled all the way until it hit the back of the end zone as the clock hit zeroes resulting in a safety and a 43-41 Orlando victory Sunday before 6,287 at Honda Center.

“It was a very difficult loss to swallow. I feel like we gave the game away,” said KISS head coach Omarr Smith. “I feel like we lost a game we should have won. It’s very disheartening.”

The KISS led 21-14 at half time and exchanged touchdowns with Orlando until the end. Both teams missed extra points in the fourth quarter leading to the 41-41 tie and the game ending safety.

The KISS  scored first on a Pete Thomas six-yard touchdown pass to Donovan “Captain” Morgan. Then the defense stopped the Predators on the one-yard line.

Morgan hauled in his second of the night from Thomas – this one from seven yards out for a 14-0 KISS lead. Orlando countered with a 13-yard TD strike from Bernard Morris to Greg Carr to cut the lead in half.

Thomas was then intercepted on the next possession by Varmah Sonie to set up Orlando on the KISS 21. Morris capped the drive with a three yard keeper to tie it at 14.

Thomas connected with Morgan for the third time on a seven-yard touchdown pass with 20 seconds left in the first half to put LA up 21-14.

Orlando opened the third quarter with drive that consumed nearly nine minutes and culminated with a four-yard touchdown strike from Morris to Brandon Thompkins to tie it.

Morgan caught his fourth touchdown of the night on a four-yard pass from Thomas as the KISS grabbed the lead again.

Thompkins immediately got the Preds even returning the kickoff 56 yards for a score.

On the next series Rory Nixon took a toss from Thomas and rumbled 16 yards into the end zone with just over eight minutes left to put the KISS back on top.

Thompkins again burned the KISS returning the ensuing kickoff 55 yards for a touchdown to square it at 35.

Thomas found Brandon Collins, who broke by the defensive back and then waltzed into the endzone for the KISS lead. But the extra point was missed with 2:26 left.

The Predators marched down and scored with ten seconds left on a two-yard run by Morris but the extra point was also botched as it sailed wide and the score was tied at 41.

Then the field goal attempt proved to be the Kiss of death for LA.

Thomas completed 21 of 39 for 237 yards and six touchdowns for the KISS. He also threw an interception. Morgan caught eight passes for 81 yards and four scores.

Thompkins was huge for Orlando catching eight passes for 82 yards and a score and the two kick off returns for scores.

The KISS fell to 4-5 with the heartbreaking defeat while Orlando improved to 8-2.