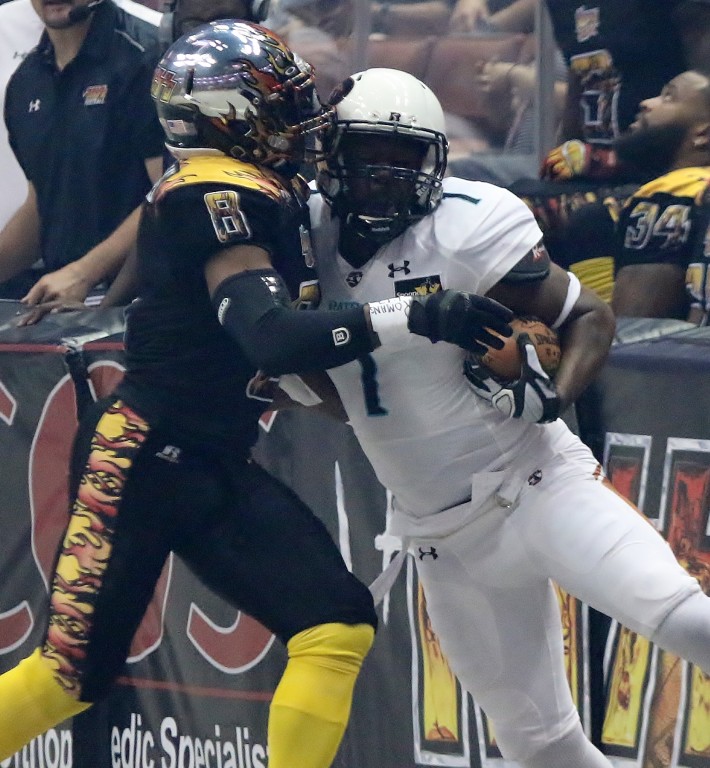 Once again Arizona proves to be too much for Clevan Thomas and the LA Kiss to handle. (Photo by Duane Barker)

(Anaheim) – The KISS fell behind by three touchdowns at halftime and ultimately could never recover in a 64-49 loss to Arizona Sunday at Honda Center.

Nick Davila threw four touchdown passes in the first half for the Rattlers and KJ Morton returned a Pete Thomas pass 19 yards for a pick six to highlight the first half. 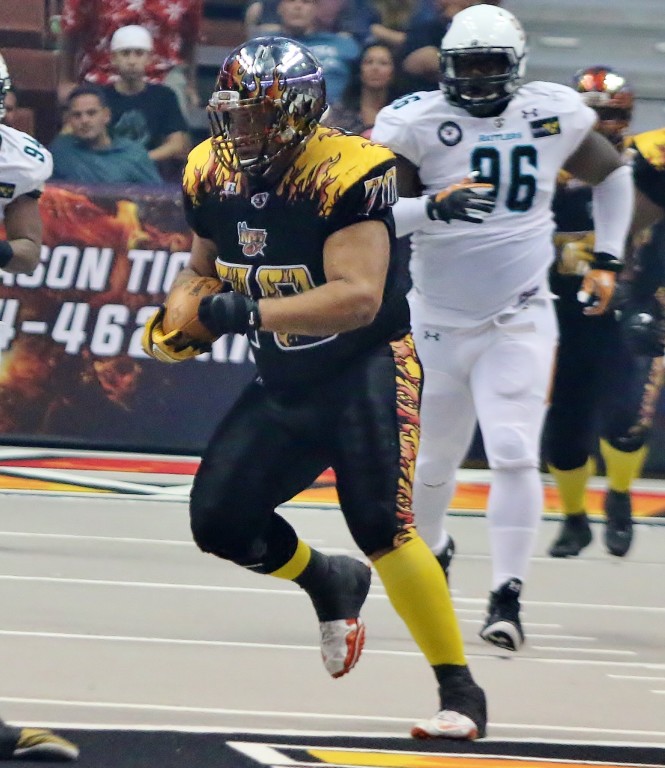 Colin Madison goes a rumblin after a reception! (Photo by Duane Barker)

Thomas connected with Justin Wilson for a 39-yard touchdown pass to cut the lead to 21-12 but the extra point attempt was fumbled and Jeremy Kellem returned it to the end zone for two points. Later in the half Thomas hit Donovan “Captain” Morgan for a 40-yard TD strike and he also scored on a two-yard run but the KISS still went into the half down by three scores.

Arizona went up 43-20 just before the break when Davila connected with Purify for six yards but Josh Victorian of the KISS got the two points back when he returned a blocked extra point back to the end zone to make it 43-22.

The KISS turned it around in the third quarter scoring on three consecutive possessions. After scoring on their first possession of the second half on a five-yard run by Rory Nixon,  Fredrick Obi picked off a pass to set up a Thomas to Morgan 19-yard TD pass. The KISS then held on downs and Thomas then found a wide open Rory Nixon over the middle for an 11-yard score. The extra point was missed and the KISS was down just one at 43-42.

The Rattlers responded with a TD pass from Davila to Mykel Benson, who caught the ball out of the backfield and then rumbled 36 yards for a score to put Arizona up 50-42.

The KISS came right back as Morgan got behind the Rattler secondary and hauled in a perfectly thrown 43-yard bomb from Thomas to again cut the lead to one. For the KISS that was their last score of the night.

The Rattlers answered with a drive of their own capped by a one-yard run by Benson.

Thomas was hit while releasing the ball on the following series and was intercepted. Arizona cashed in on a couple of big runs by Benson, including another short blast for a touchdown and the lead was once again 15 at 64-49.

The KISS scored 26 points in the third quarter but none in the fourth and fell to defeat.

The KISS fell to 5-7 with the loss with four games remaining while Arizona improved to 10-3.