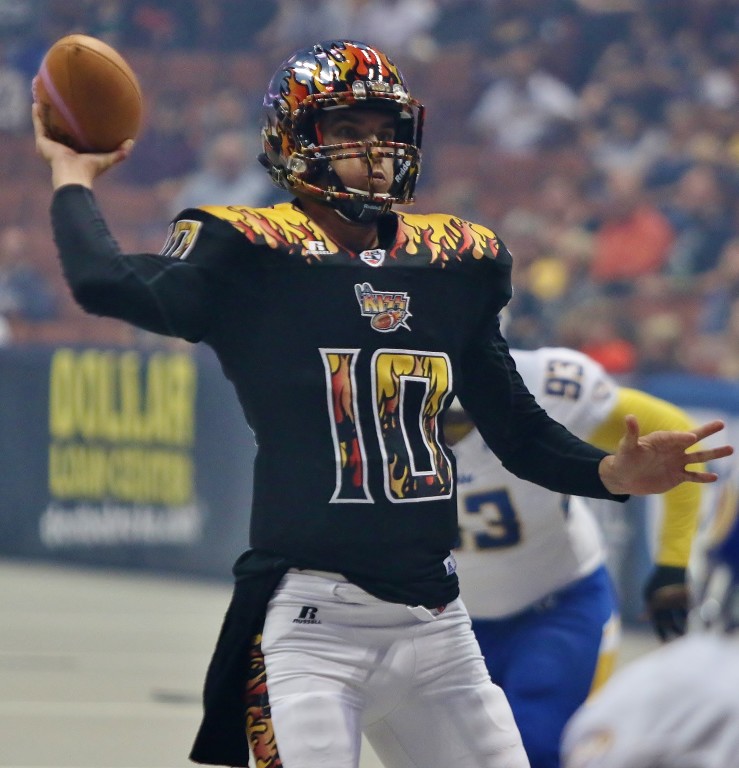 Nathan Stanley returns to the Kiss starting lineup and leads LA to the W. (Photo by Duane Barker)

(Anaheim) – The defense was in shut down mode throughout and the offense exploded in the second half as the KISS took care of Tampa Bay 48-21 Monday night before 6,249 at Honda Center.

The defense stopped the Storm on downs on five different occasions to set the tone for the offense who came to life late. The score was tied at 14 at halftime but the KISS came out and blitzed Tampa Bay 34-7 in the second half to win going away. 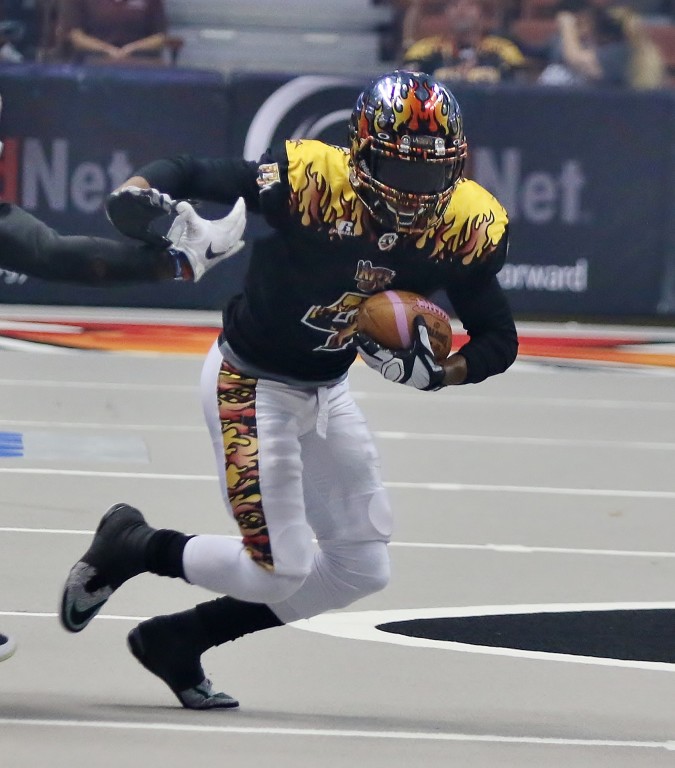 The KISS got on the board first. After holding Tampa Bay on downs Nathan Stanley hit Donovan “Captain” Morgan for an 11-yard touchdown for a 7-0 advantage.

Tampa Bay got even on a seven-yard TD strike from Jason Boltus to T.T. Tolliver, but on the next series Rory Nixon rumbled in from two yards out for the KISS to put LA back up by a score.

The Storm responded with a score on the ensuing possession on a two-yard blast by John Brown.

Neither team found the end zone on their next possessions and the teams entered the break tied. Then the KISS blew it open scoring the next 27 points.

Nixon got his second of the night from three yards out on the KISS’ first possession of the third quarter to go up 21-14.

The KISS held on downs again and this time DJ Stephens was on the receiving end of a nine-yard Stanley touchdown bullet to put LA up by two scores, however the extra point was missed.

The Storm fizzled again on offense and the KISS took advantage when Stanley connected with Morgan on a corner route for a 29-yard scoring strike. Suddenly the KISS was up 20.

Stanley to Stephens worked again – this time for 32 yards as the KISS run was extended to 27-0 and the lead expanded to 41-14.

Adam Kennedy, spelling Boltus, scored on a seven-yard TD run as Tampa Bay finally broke through in the second half.

The KISS had one more strike left as Stephens hauled in a TD pass from back up quarterback Pete Thomas from 29 yards out.

After the extra point, a fight broke out involving a player from the KISS and Tampa Bay. Apparently a fan was involved as well and other players joined the fray. The officials stated since there would be multiple ejections the game was ruled over with 24 seconds still left on the clock. Fines and suspensions are expected to be announced by the league this week.

“Regardless of their record they (Tampa Bay) came in here to win a game. So it was close,” said LA head coach Omarr Smith. “We made some adjustments at half time and did some things different offensively and we were able to get some stops and create some separation. I was really happy with the way we played in the second half.”

Smith wasn’t happy with the way the game ended however. “I’m not happy about that at all. That’s not what we’re about. We need to handle ourselves with a little more composure, especially at the end of the game. We’ll address that. But that’s not indicative of a football team that I have my name on,” Smith said.

Stanley completed 17 of 32 for 186 yards and four touchdowns with no interceptions for the KISS. Stephens had eight catches for 112 yards and three touchdowns. Tolliver had 10 receptions for 116 yards and a touchdown for the Storm.