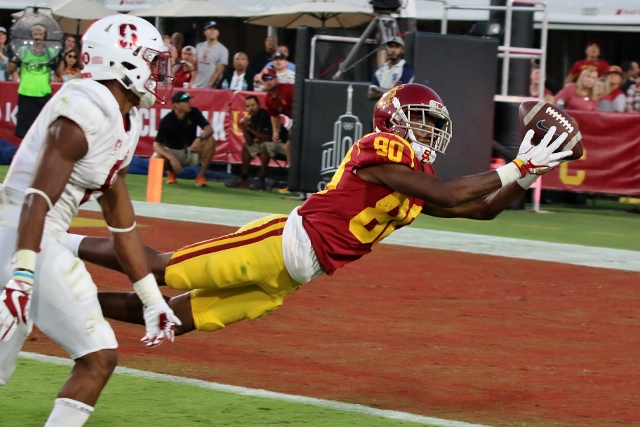 Deontay Burnett and the Trojans fly by Stanford. (Photo by Duane Barker)

Ronald Jones II rushed for 116 yards and two touchdowns and Stephen Carr ran for 119 as the Trojans gashed the Stanford defense throughout the game.

USC scored on its first two possessions on 80 yard drives. On the first drive the Trojans needed 13 plays to finish it. Sam Darnold hit Steven Mitchell on a four-yard strike for the 7-0 lead.

Stanford answered quickly as Bryce Love broke off a 75-yard run on the first play from scrimmage for a touchdown. USC missed him  at the line of scrimmage and he was off to the races.

On the following series USC again was in the mood for a drive. They used nine plays with Jones capping it with a one -yard run. 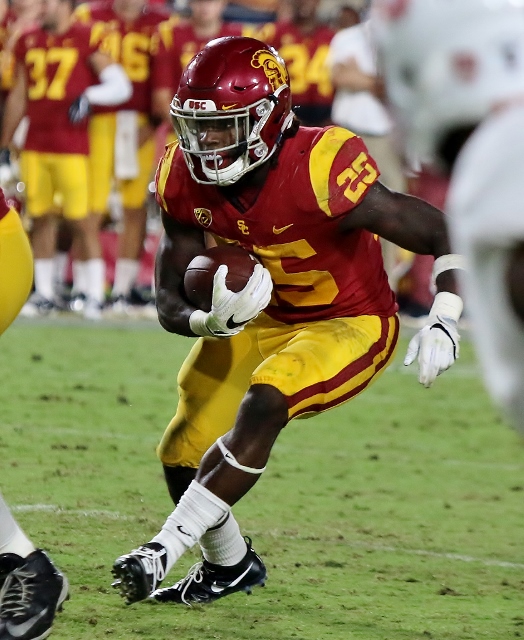 Stanford bounced back to get even again. The Cardinal went 54 yards on five plays to tie it at 14 early in the second quarter. Keller Chryst faked an inside handoff and then rolled out and hit a wide open Dalton Schultz with a one-yard pass.

A 52-yard run by Carr set up USC on the next score. Darnold found Deontay Burnett in the right flat and he beat the cornerback to the end zone for a 22-yard score to put the Trojans up 21-14 with 11:42 left in the half.

The Trojans then forced the Cardinal to punt but on the next possession Darnold threw an interception on third down to give the ball right back.

The Cardinal cashed in – but with only a trey – as Jet Toner booted a 36-yard field goal at the 2:43 mark of the second quarter. 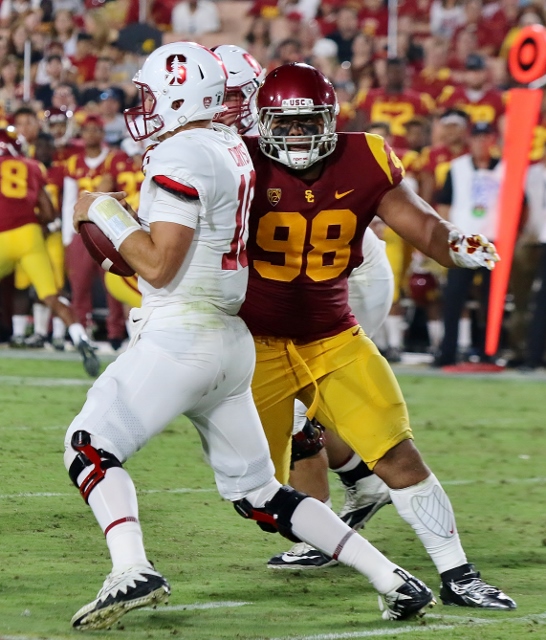 Josh Fatu and the Trojan defense made the plays when needed. (Photo by Duane Barker)

USC took possession and Darnold connected with Mitchell on a 46-yard pass play to set up another score. On the next play he found a diving Burnett in the right corner of the end zone for a 26-yard touchdown with 48 seconds left in the half. The Trojans took that 11 point lead into break.

Darnold was 14 for 17 for 225 yards and 3 touchdowns and the one interception at the half. Burnett had 73 yards and a pair of scores on 6 catches. Mitchell had 3 for 83 and a TD. Carr rushed for 62 yards in the first half.

For Stanford Love had 11 carries for 144 yards for the bulk of the offense. Chryst completed 9 of 14 for 81 yards and a touchdown.

Darnold was intercepted by Alijah Holder on the first Trojan series of the third quarter but the Cardinal failed to capitalize. The teams exchanged punts from there.

Neither team scored in the third quarter and the Trojans carried the 28-17 advantage into the fourth quarter.

Darnold connected with Mitchell for an 11-yard touchdown pass to cap a 12-play, 90 yard drive with 9:42 left in the fourth quarter to put USC up 35-17. For Darnold, it was his fourth touchdown pass of the game.

Stanford tried to stay in the game going 74 yards on 7 plays. Chryst hit JJ Arcega-Whiteside on a 7-yard TD strike to cut the lead to 35-24.

USC landed the knock out punch on the next drive. The Trojans drove 75 yards on 7 plays with Jones driving the nail in the coffin with a 22-yard touchdown run with 4:15 left.

Stanford was then stopped on fourth down on its own 43-yard line and USC took over with 2:58 remaining.

The Trojans ran out the clock for the victory.

Darnold finished 21 of 26 for 316 yards and 4 scores along with the two picks. Burnett hauled in 9 receptions for 121 yards and 2 TDs. Mitchell caught 4 passes for 94 yards and a pair of scores.

For the Cardinal Chryst threw for 172 yards and 2 touchdowns and Love rushed for 160 yards and a touchdown on 16 carries.

USC, now 2-0, will face Texas at the Coliseum next Saturday. Stanford fell to 1-1.

(21900)
$164.93 (as of n/a - More infoProduct prices and availability are accurate as of the date/time indicated and are subject to change. Any price and availability information displayed on [relevant Amazon Site(s), as applicable] at the time of purchase will apply to the purchase of this product.)

(363921)
$79.99 (as of n/a - More infoProduct prices and availability are accurate as of the date/time indicated and are subject to change. Any price and availability information displayed on [relevant Amazon Site(s), as applicable] at the time of purchase will apply to the purchase of this product.)

(5728)
$13.99 (as of n/a - More infoProduct prices and availability are accurate as of the date/time indicated and are subject to change. Any price and availability information displayed on [relevant Amazon Site(s), as applicable] at the time of purchase will apply to the purchase of this product.)
Posted in College | Tagged Alijah Holder, Bryce Love, Dalton Schultz, Deontay Burnett, Jet Toner, Keller Chryst, LA Memorial Coliseum, Ronald Jones, Sam Darnold, Stanford Football, Steven Mitchell, USC Football