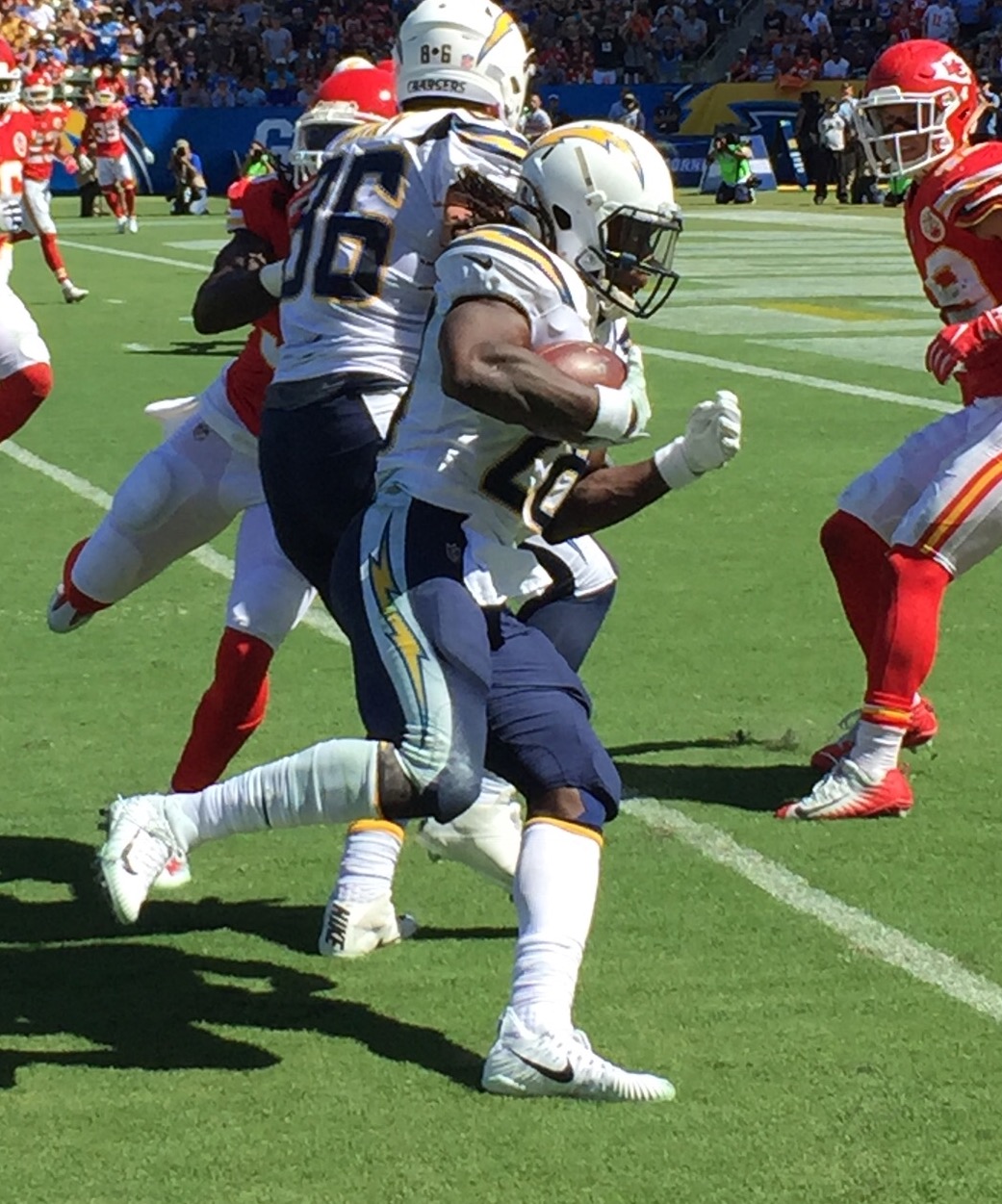 Melvin Gordon scores on an 11 yard run for the Chargers! (Photo by Duane Barker)

(Carson)- Philip Rivers threw three interceptions in the first half and the Chargers could never recover in a 24-10 loss to Kansas City Sunday before 25, 386 at StubHub Center.

LA turned the ball over on its first two series and the Chiefs turned them both into touchdowns to go up 14-0. That was all Kansas City needed to secure the victory.

“We don’t want to turn the ball over three times and we don’t want stupid penalties on special teams,” said Charger head coach Anthony Lynn. “We have to play four quarters of football.”

Rivers first pick came on LA’s first possession by Terrance Mitchell setting up KC at the Chargers 43. Four plays later the Chiefs went up 7-0 on a 30-yard touchdown strike from Alex Smith to Tyrek Hill.

Marcus Peters intercepted Rivers on the next series and again Kansas City was in business at the LA 34. KC used four plays again – this time Smith shoveled a pass to Albert Wilson who went up the middle for a six yard score with 5:33 left in the first.

The Chargers got on the board just before the end of the quarter marching 59 yards on nine plays. Melvin Gordon finished the drive with an 11-yard run to cut the Chiefs lead to 14-7.

In the second quarter, after Rivers was again picked by Mitchell, Cairo Santos booted a 34-yard field goal to put KC up by 10. He missed A 51-yarder earlier but the Chargers were guilty of roughing the kicker.

LA marched drove down the field late in the second quarter before being halted at the KC 14. Younghoe Koo kicked a 29-yard field goal just before halftime to make it 17-10 at the break.

The game stayed that way until late in the fourth when Kareem Hunt broke off a 69-yard touchdown scamper with less than two minutes left to put the game away.

“Yeah, I had a rough day,” Rivers said. “On one really the  guy fell off his man in man coverage and the other two were both terrible throws and poor decisions. I really just was never in any kind of groove the whole day.”

As a result the Charger offense never found its groove either.

The teams exchanged punts in the third quarter.

After more of the same early in the fourth, the Chargers punted the ball away to Kansas City with 3:15 left in the quarter down 17-10. The Chiefs took advantage when Hunt broke through the line of scrimmage and raced off to a 69-yard touchdown run to break open the two touchdown advantage.

“I thought we could stop them,” Lynn said of punting the ball away at that juncture.

Hunt finished with 172 yards on 17 carries for Kansas City, an average of over 10 yards a clip. Smith was a solid 16 of 21 for 155 yards and two scores and Hill hauled in five receptions for 72 yards and a touchdown.

The Chargers fell to 0-3 with the defeat while the Chiefs improved to 3-0. LA will host the Philadelphia Eagles next Sunday.

“We need to get going quick,” Rivers added.

(20147)
$8.99 (as of n/a - More infoProduct prices and availability are accurate as of the date/time indicated and are subject to change. Any price and availability information displayed on [relevant Amazon Site(s), as applicable] at the time of purchase will apply to the purchase of this product.)

(166571)
$99.99 (as of n/a - More infoProduct prices and availability are accurate as of the date/time indicated and are subject to change. Any price and availability information displayed on [relevant Amazon Site(s), as applicable] at the time of purchase will apply to the purchase of this product.)

(12)
$8.98 (as of n/a - More infoProduct prices and availability are accurate as of the date/time indicated and are subject to change. Any price and availability information displayed on [relevant Amazon Site(s), as applicable] at the time of purchase will apply to the purchase of this product.)
Posted in Pro Football | Tagged Alex Smith, Anthony Lynn, Kansas City Chiefs, Kareem Hunt, LA Chargers, Marcus Peters, Melvin Gordon, Philip Rivers, StubHub Center, Terrance Mitchell, Tyrek Hill