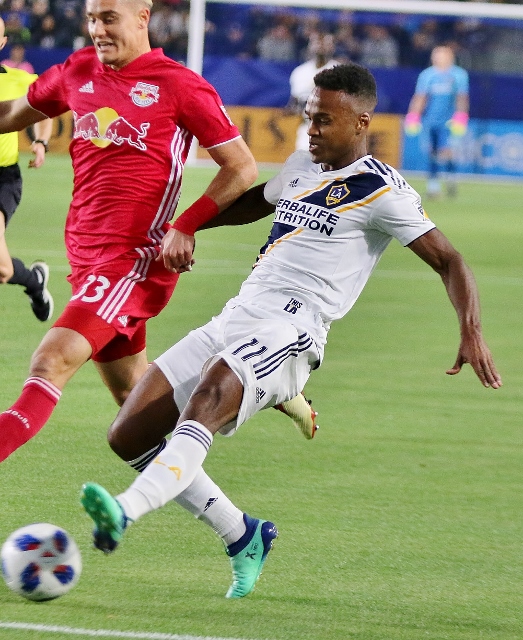 Ola Kamara gets one of the Galaxy’s two goals. (Photo by Duane Barker)

(Carson) – A penalty kick by Alejandro Romero Gamarra in the 84th minute lifted New York to a 3-2 win over the Galaxy Saturday night before 26, 704 at StubHub Center.

The kick was set up by a hand in the box call on the Galaxy’s Dave Romney.

The Galaxy had erased a 2-0 deficit with two goals in a seven minute span in the second half but were unable to grab the lead. It was a frustrating night as LA had two goals disallowed due to offside calls – two goals that would have given them a 4-3 victory.

New York took a 1-0 lead in the 7th minute when Bradley Wright-Phillips hit Daniel Royer with a perfect pass and he booted it by David Bingham.

The Red Bulls made it 2-0 early in the second half in the 49th minute as Wright-Phillips again picked up the assist finding an open Florian Valot in front of the net and he took advantage by driving it home.

It appeared the Galaxy had the equalizer a minute after Royer’s opening goal when Roman Alessandrini scored from the right side off of a pass from Ola Kamara. However after a huddle by the officials and a review it was ruled that Kamara was offside and the goal was taken away.

New York just missed an opportunity for another one in the 27th minute but Bingham made a big save on Tyler Adams who was right in front. 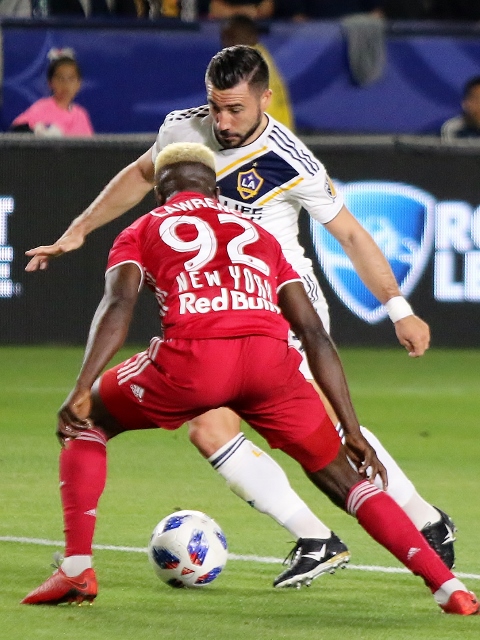 Two minutes of additional time were added in the first half but the Red Bulls took the 1-0 margin into the break.

Down 2-0 after Valot’s goal, the Galaxy awoke. After Alessandrini was denied by Luis Robles in the 58th minute, Kamara wasn’t denied as he took a nice dish from Zlatan Ibrahimovic and punched it by Robles to make it 2-1.

In the 66th minute Gio dos Santos, stationed just outside the center of the box, took a header pass from Dave Romney and finished it by knocking it in to tie it at 2. That was Dos Santos’ first goal since May 17, 2017.

In the 78th minute it happened again. Ibrahimovic scored what appeared to be the go ahead goal as he scored from right in front of the net but again the officials ruled the goal was disallowed due to offside – this time on Ibrahimovic.

Five minutes of additional time were added but New York held on for the win.

“I think you should interview the officials. I thought it was awful,” Schmid said when asked about the officiating. “My understanding of the (review) rule is that you don’t overturn it unless it’s clear. You watch Ibrah’s (Ibrahimovic) goal which would have made it 3-2 and the linesman ends up calling offsides. If you watch a replay of the linesman he almost dropped the flag because he was so nervous putting the flag up. If he lets the goal stand they don’t overturn it the other way. But because he calls offsides they feel it’s not clear. But when you watch the replay he’s clearly onside. I don’t understand the PK either but it’s harder to see that on replay.”

The Galaxy will now hit the road starting next week at Houston. They won’t return home until Friday May 25.