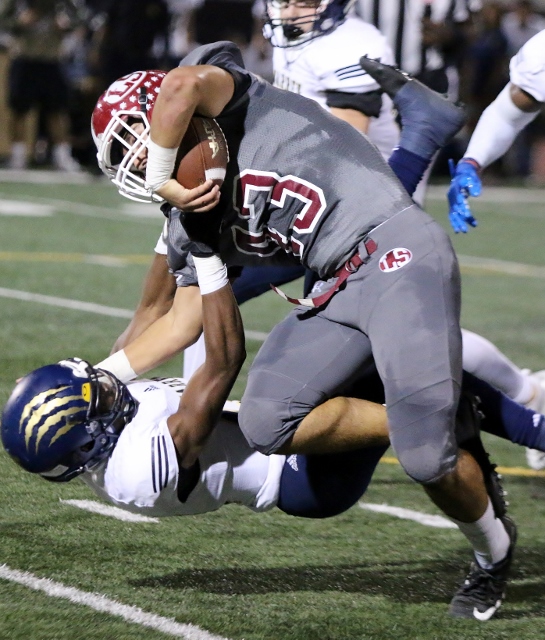 Abraham Shalash and the La Serna Lancers travel to St. Paul for the 2nd round of the Division 5 Playoffs. (Photo by Duane Barker.)

Both teams rolled in the first round. La Serna routed Colony 38-8 while St. Paul was dismantling Corona 51-0. Both teams also won their respective leagues and are coming in at 10-1. The difference? There might not be one. St. Paul’s only loss was to powerful Paraclete by a touchdown and La Serna fell a buck short against a solid Warren team. Expect a back and forth affair that goes down to the wire. Home field doesn’t always make a big difference in high school football but it may be the only thing to go on in this one. The Swordsmen win at home.

South Hills struggled early last week against Tustin but in the end the Huskies showed why they are 11-0 by dominating in the fourth quarter. Also they were playing without their starting quarterback Kahlil Ali who was held out for disciplinary reasons. Ali should be back this week but even if he’s not South Hills can do enough damage with Juaquin Elliott, Thonye Charles and Jordan Sanchez. The Huskies have seen Mira Costa before. They beat the Mustangs 50-20 September 21 at Mira Costa. They had no trouble then and won’t have any here. South Hills stays perfect.

The Vikings are still working on a perfect season. Warren, which has had a nice year of its own, would like nothing better than to ruin Northview’s run. The Vikes cruised last week over Santa Ynez while Warren had to fight off a gallant Crescenta Valley squad.  Northview has plenty of weapons. James Jimenez,  Deshon Thompson, Damion Thompson and Jamier Johnson can all beat you with a quick strike. Warren quarterback Chris Venegas can burn you with his arms and legs as he threw for nearly 2,400 yards and ran for over 500. Don’t even think about leaving early. This one won’t be settled until late. When the dust clears the Vikings remain perfect.

Temescal Canyon escaped with a win over Arroyo. If a fumble is ruled to be recovered by Arroyo, a 27 yard field goal is made or a two point conversion is successful then it’s the Knights that face the Apaches. But it’s the Titans that are here and now they get the reward of facing Arcadia. Reward? It may be a punishment. The Apaches ran roughshod through the Pacific and then dropped 56 on Agoura in the opening round. They have more weapons than the New Orleans Saints. Temescal has a nice back in Brandon Clemons and a couple of big boys up front, but I’m not sure how that will help to stop Arcadia. The Apaches will have a long bus ride out to Temescal Canyon but it will seem a lot shorter on the way home. Apaches win big.

The long awaited rematch is here. Last year the Saints hosted Kaiser in the first round of the playoffs and fell 35-34 in overtime. San Dimas was stopped at the goal line on a two point conversion run to end the game on a play that to this day remains controversial. But the running back was ruled stopped short, Kaiser celebrated and here we go again. The Cats won the Sunkist League and improved to 10-1 overall with a 41-24 win over Sultana last week. Kaiser loves to ground and pound and are led by Christian Hunter who rushed for over 2,500 and 36 touchdowns. The Cats rushed for 3,671 yards overall compared to 722 passing. The Saints keep it on the ground as well with 3,820 yards rushing including 1,311 yards by Austin Rivera. It will probably come down to who makes the most stops. There will be some nervous moments on both sides. It could come down to a two-point try again. This time the Saints are the last team standing.

It was a war but San Marino got it done last week against Segerstrom. Division 9 is a nice fit for the Titans. Not too low that they will blow everybody out and not too high that they are overmatched. They just might make a run to the Finals. North Torrance won the Pioneer League and is 9-2 overall. Last week the Saxons held on to beat Orange 19-16. Both teams can go toe to toe defensively but San Marino is a little more explosive on offense. It won’t be a picnic but the Titans get it done and advance to the semis.

El Rancho gets a break here. It’s much easier staying home than having to load up a bus and make a drive out to Palmdale. That alone is worth a touchdown. If the Dons can get an early lead and establish a ground game with Ramon Rojas and Richie Amaya they might be able to keep Knight at bay. If they can force a couple of turnovers and get Knight back on its heels early the home crowd could make a big difference. Knight will compete, even into the fourth quarter, but a home crowd and a big play on defense gets ER to the semis. The Dons move on.