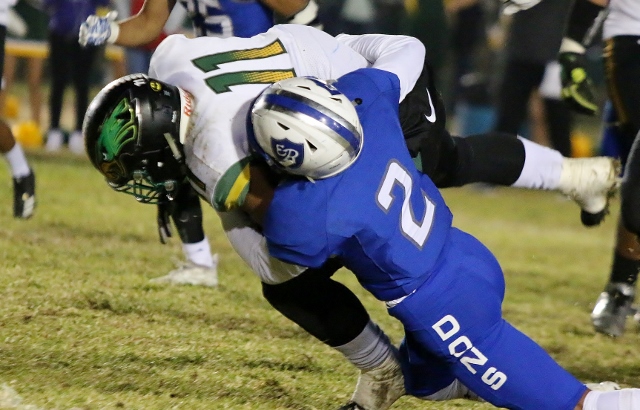 Jordan Goodloe and Eisenhower are too much for El Rancho.

(Pico Rivera) Last week El Rancho won in thrilling fashion coming from behind to be Knight High School 56-52. There would be no magic on this Friday night as the Eisenhower Eagles downed the Don’s 34-21 in the CIF Division X semi-finals.

Eisenhower jumped out to an early 7-0 lead on the Don’s after a bad snap was recovered by the Eagles at the El Rancho 25. Dayvon Benton scooped up the loose ball and raced 25-yards to the end zone.

Later in the first quarter the Eagles extended their lead to 14-0 on a four yard run by Jordan Goodloe. The score capped a seven-play 73-yard drive.

The Don’s came back to cut the lead to 14-8 on their ensuing drive. Richie Amaya got loose and scored on a 31-yard run to paydirt. El Rancho went for two and got it on a gadget play when Justin Torres found Dominic Torres in the back of the end zone. 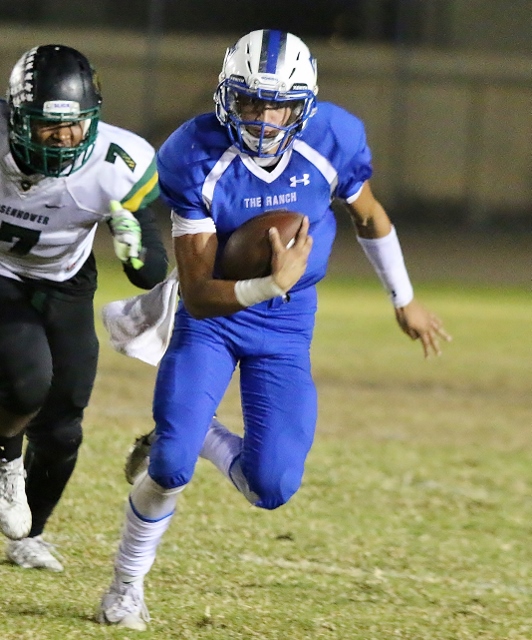 Jacob Moeller accounted for two scores but it wasn’t enough

With 7:05 remaining in the first half, El Rancho took their first lead of the game on a screen past from Jacob Moller to Fernando Silva. Silva caught the pass in the left flat, got to the sideline and outraced the Eagle defense for the touchdown. Joseph Reyes booted through the extra point for the 15-14 lead.

The lead wouldn’t last too long. El Rancho faced with a fourth and one at the Eagle 13 decided to go for it and Amaya was stuffed for no gain. On the next play from scrimmage the Eagles ran a screen play of their own and Ceasar Ayala found Benton on the receiver screen and Benton did the rest going 83-yards for the score.

Coming out of the locker rooms to start the second half, Eisenhower went with a pooch kick that they managed to recover at the El Rancho 40. A six play drive stalled and ended with a 22-yard field goal to extend the Eagle lead to 24-15.

After another Eagle field goal pushed the lead to 27-15, the Don’s answered with a score of their own. A 10-play 80-yard drive was capped by a four yard Moeller pass to Oscar Mendez. Even though Reyes’ extra point sailed wide right, El Rancho only trailed by six.

El Rancho attempted the on-side kick but Eisenhower managed to recover the ball at their own 49. One play later the lead was back to 13 when Goodloe busted loose for a 51-yard touchdown run.

The Don’s final hope was dashed as a Chris Andrade pass was picked off by Benton at the El Rancho 40.

The Eagles managed to get the first down they needed to be able to close out the game in victory formation.