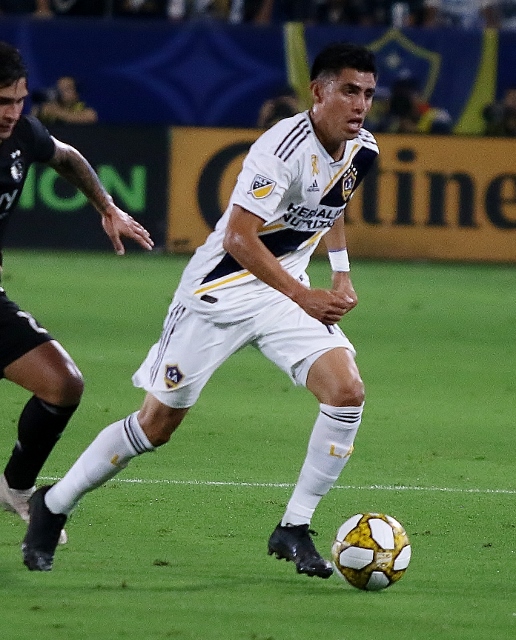 Joe Corona scored his first goal as a member of the Galaxy to give LA a 2-1 early in the second half. (Photo by Duane Barker).

(Carson) – Zlatan Ibrahimovic scored a hat trick and the Galaxy blew open a tie game with six goals in the second half in a 7-2 rout of Sporting Kansas City Sunday night at Dignity Health Sports Park.

Tied at one at the half the Galaxy quickly broke the tie three minutes into the second half when Joe Corona headed one in off of a perfect cross pass. Two minutes later Ibrahimovic got his second of the night as he fought off a defender in the front of the net and booted it in for a two goal advantage.

In the 69th minute Uriel Antuna scored to make it 4-1. Later in the half Sebastian Lletget scored two goals in two minutes. In the 77th he found the back of the net on an assist from Antuna. Two minutes later he took advantage of a nice pass from Efrain Alvarez for another one.

Ibrahimovic completed his hat trick in the 85th minute on another assist from Alvarez for the seventh Galaxy goal of the night. It didn’t look like a laugher early.

Sporting Kansas City broke the ice in the 24th minute when Felipe Gutierrez found some room in the middle and fired one by David Bingham for a 1-0 lead.

KC almost had one earlier but a shot hit the post. The Galaxy had their chances as well early. In the 11th minute a header by Ibrahimovic was knocked away and over the net by Kansas City goalkeeper Tim Melia. Five minutes later another header by ibrahimovic was saved by Melia. 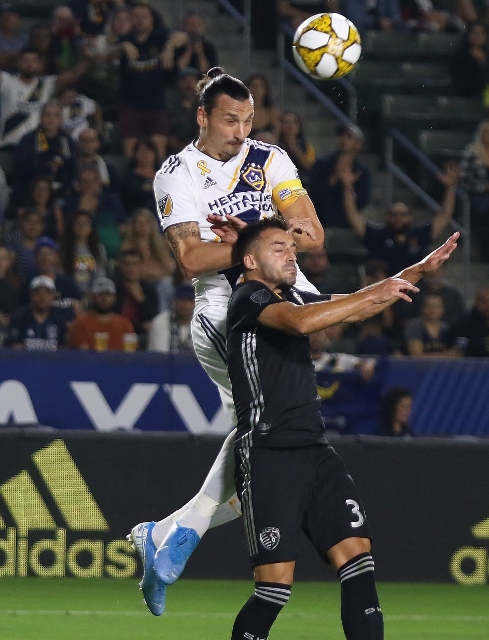 In the 19th minute Christian Pavon ripped one from distance but Melia was there to make the save. Ibrahimovic tied it in the 32nd when his original penalty kick was blocked but he followed it up with the goal. The kick as set up on a foul on Antuna who had raced into the box.

In the 41st minute Melia beat a rushing Pavon to the ball outside the box and punched it away to preserve the tie.

The teams went into the half tied at one. Then all Galaxy broke loose. 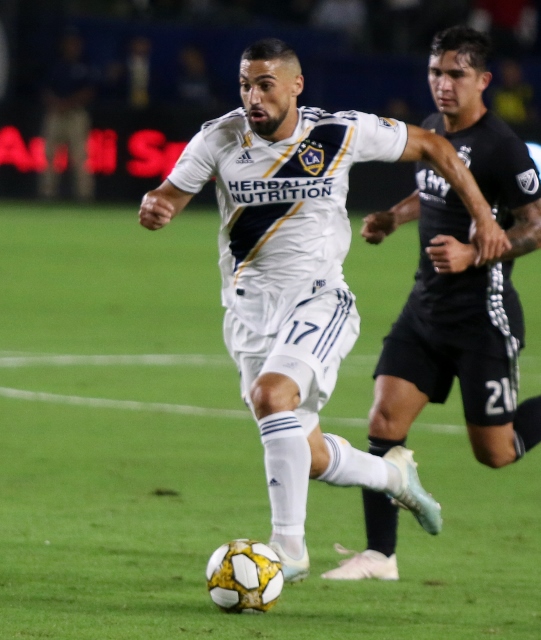 Sebastian Lletget scored two goals in two minutes in the second half. (Photo by Duane Barker).

The Galaxy had 10 total shots to Kansas City’s 9 in the first half. LA had 6 shots on target as they made Melia work compared to just two for Sporting Kansas City. The Galaxy also controlled the ball twice as much as Kansas City.

It was a big win for the Galaxy as they improved to 14-13-3 but more importantly fifth in the Western Conference. Sporting Kansas City fell to 10-13-7.