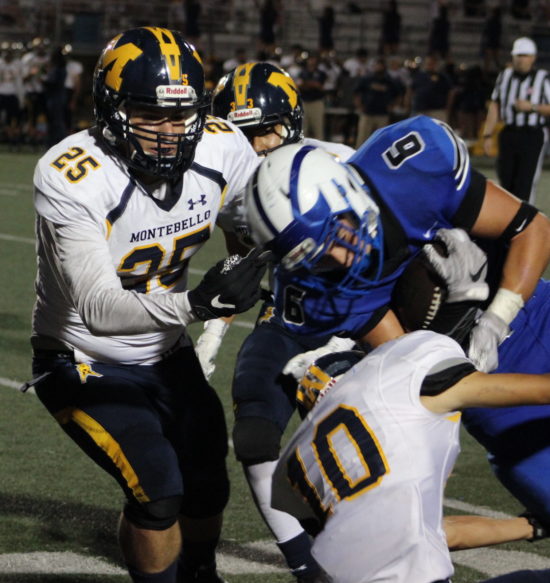 The Montebello defense needs to stop Alhambra this week to get a key Almont League win.

Key game for Alhambra. Even after the win over Schurr people are still wondering if the Moors can do it again. A win over Montebello would nearly secure a playoff spot for the Moors and put them in a position for the Almont League title. Montebello got its first win last week after a tough non league run. Can the Oilers get their second? The answer is no. This looks like the Moors year. Alhambra takes control of the Almont

Both teams are looking to make a move in the Hacienda. The winner in this one could have the inside track to the league crown. Both offenses can score but it’s the defense that’s going to decide this one. Los Altos might trail early but rallies in the fourth quarter to pull it out. Could come right down to the wire.

After Arroyo lost last season to El Monte it seemed like it might be a one time deal. The Knights would make adjustments, rally the troops and regain their spot at the top of the Mission Valley League. But Arroyo has struggled, the injury bug has hit and it hasn’t been the year the Knights were hoping for. Meanwhile the Lions just keep rolling along. The Lions dominance of the MVL continues. At least for now. They’ll beat Arroyo and run the table. It’s the year of the Lion.

Burbank got belted last week by Crescenta Valley and it won’t get any easier this week against Muir. The Mustangs took out Burroughs last week and are taking aim at the Pacific League title. The Bulldogs looked like a legitimate contender before the Falcons dismantled them. The game to watch in the Pacific is October 25th when Muir squares off against Crescenta Valley in Glendale. Muir wins this one handily.

Bonita walked off the field last Friday night with a bad taste in their mouths. The Bearcats had just spent a long night grappling with Glendora, and coming up short. The Tartans were tough but the officiating may have been tougher. Either way they had their first loss of the season. Now they’re ready to take it out on somebody and Colony is the one standing in their way.  Colony will put up a fight early but eventually Bonita will wear the Titans down. The Bearcats rebound with a victory.

Another big Palomares League matchup. Like last week in the Glendora-Bonita battle both teams come in unbeaten. The winner here clearly will be the top dog in the league. Both teams have had some big victories but the Tartans have had an easier time of it. Glendora has a strong running game with Xzavier Ford and a solid passing attack with Jacob Gonzalez. They’re just a tough out. Glendora improves to 7-0.

Of you happen to be out in the Palmdale area Friday night and feel like watching some good football go check out this one. St. Francis and Paraclete put on a show last year that people are still talking about today. St. Francis has lost just once while Paraclete has lost three but Spirits have played everybody except Alabama. That schedule should be enough to get them through this one. Fortunately for St. Francis this isn’t a league game. Paraclete comes out on top.