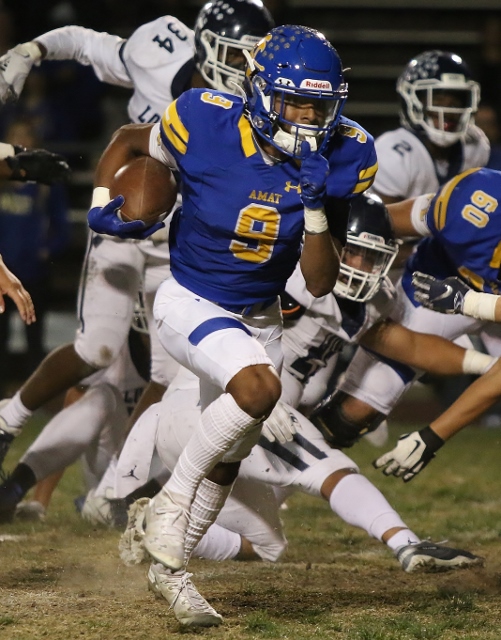 (La Puente) The Bishop Amat Lancers hosted the Loyola Cubs Friday under the lights at Bishop Amat High School and with NFL Hall of Famer Tony Gonzalez looking on, hammered their guests to the tune of 38-10 in front of a boisterous Amat crowd.

Gonzalez was on hand to see his son Nikko play linebacker for Loyola.

Another young man with a pedigree that reaches to the NFL Dyson McCutcheon (Grandson of former Ram running back Lawrence McCutcheon) got the scoring started for the Lancers getting the call from 11-yards out to cap a nine play drive. Adrian Ochoa added the extra point for the 7-0 lead with 7:28 left in the opening frame.

Steven Nava, Jared Gener and the rest of the Lancer D shut down Loyola

With 6:44 remaining in the second the Lancers only needed five plays to light up the scoreboard for the third time. McCutcheon got the call again and went 16-yards to paydirt, his second of the evening.

The Cubs managed to get on the board with 4:03 left in the first half. After a six play drive stalled at the Amat 13, Diego Burgos came on to boot through a 30-yard field goal to cut the lead to 21-3. The score was aided by a pass from Hayden Eaves to Joseph Taylor on a fourth down play that caught the Lancers off guard.

McCutcheon capped off a three touchdown night with 2:27 left in the second to answer the Loyola score. The score was on the ground again from 13-yards away. McCutcheon finished the night with 108-yards on 10 carries with the three scores.

Loyola’s lone touchdown came with just :25 left in the half. Brayden Zermeno found Jacob Kelly from 19-yards away. Burgos added the point after but Amat’s lead was still 18.

The Lancers capped their scoring for the night with a 20-yard run by James Henriquez and a 25-yard field goal by Ochoa.

Tahj Owens led the way for the Cubs gaining 109-yards on 14 carries.

Bishop Amat will now await Sunday’s selection show to see who they will face in the first round of the CIF Southern Section Playoffs.

4 Comments to "Lancers Reign In the Mission"