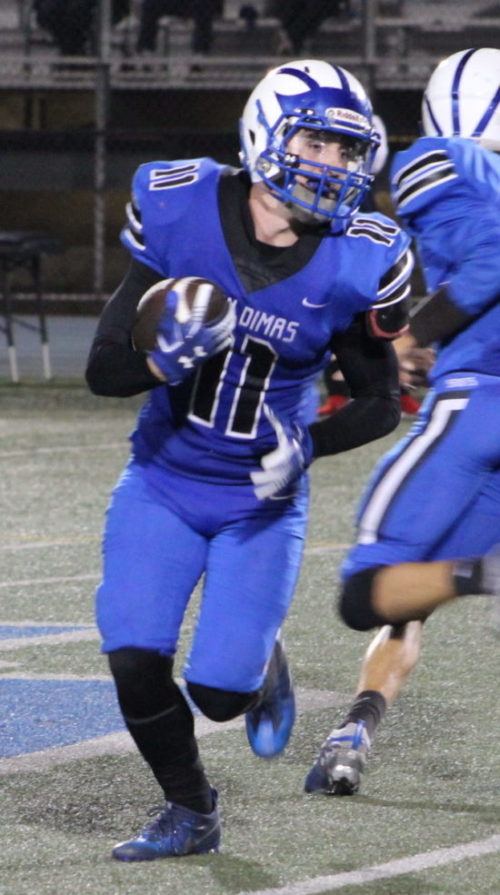 Nick Cuda had 216 yards and a touchdown rushing for the Saints and added a pick six for good measure.

(San Dimas) – San Dimas scored twice in the first three minutes and never looked back in a 49-20 rout of visiting La Salle Friday night in the first round of the CIF Division 9 playoffs.

The Saints scored on their first play when Nick Cuda got loose on a 46-yard touchdown run for a 7-0 lead. Cuda then found the end zone on the defensive side as he picked off La Salle quarterback Richard Munoz on the next series returned it 36 yards for the touchdown. The pick six and a two point conversion made it 15-0.

With no time remaining on the first half clock Munoz hit Marcus Powe for La Salle in the endzone for a 15 yard touchdown to cut lead to 15-6.

The Saints landed the knockout blow in the second quarter with three touchdowns to take a 36-6 lead into the break. First Bleau Wallace scored on a 19-yard run to cap a five play, 76 yard drive to go up 22-6.

On the next series San Dimas marched 64 yards on 11 plays with Wallace getting the honors again on a one-yard touchdown run.

It appeared the lead would be 28-6 at the half until La Salle’s Munoz was hit and fumbled and Billy Hennessey picked it up and rumbled 50 yards for the score as the first half clock ran out. Nick Reeve caught a pass from Lucas Degraaf for the two point conversion and the rout was on at 36-6.

For all intents and purposes the game was over as the teams headed into the locker room. San Dimas made it 43-6 a 33-yard TD strike by Ryan Bulick early in the third quarter.

Munoz threw a nine-yard touchdown pass to LJ Holmes late in the third quarter to cut the lead to 30. But Wallace got his third of the night on a two-yard run with 8:05 left in the fourth quarter to turn it into a running clock.

Munoz and Holmes hooked up again late in the fourth to round out the scoring.

San Dimas won as it traditionally does-by pounding the rock. The Saints had 354 total yards rushing with Cuda leading the way with 216 yards and a touchdown on 17 carries. Wallace rushed for 118 yards to go along with his three scores. Cuda also added four receptions for 49 yards.

For la Salle Munoz threw for 233 yards with 155 of those going to Holmes who had 13 receptions and two touchdowns.

The Lancers, coming off of an 0-10 season a year ago, finished the season 6-5 overall while San Dimas, now 10-1, advances to the second round.

2 Comments to "All Saints Day in San Dimas"