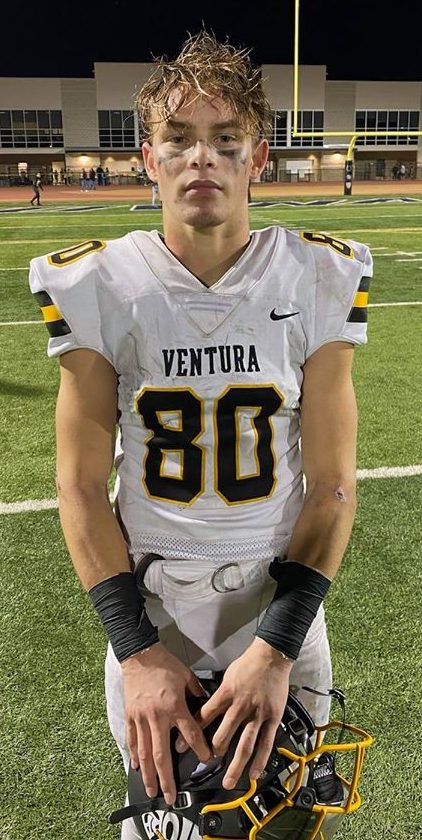 By Alex Gonzalez
(Covina) — The Ventura Cougars advanced to the second round of the Divison 7 playoffs Friday night behind Zack Rodriguez’s three-touchdown performance, leading them to a 38-35 win over Northview at Covina District Field.

“It feels amazing. We got a big win with our brothers, and nothing is better than moving to the next round,” said Rodriguez after the game. “We came out with more aggression, and honestly, with my quarterbacks, they are amazing, and I would not have done it without them.”

With both teams trading scoring punches in the first quarter, neither side could gain any momentum to start the game. It wasn’t until midway through the second quarter when Ventura scored on their final two possessions to go into intermission up 28-14.

Quarterback Jordan Tanner found Dorian Dawson alone in the corner of the endzone, breaking the 14-14 tie with 6:41 left in the second quarter. Then after Liam Mcgee picked off James Jimenez’s pass, the Cougars turned the turnover into points when Tanner and Rodriguez hooked up for a 44-yard bomb to end the half.

Following the break, the Vikings had the first possession and took advantage of the halftime adjustments. Northview constructed a 10-play drive that ended with Jimenez keeping the option and punching in the rushing score.

Then on defense, the Vikes allowed the Cougars to march down the field, but they ultimately tightened up and forced Ventura to a 33-yard field goal with 1:11 left in the third quarter.

On the Vikings ensuing drive, they duplicated what they did on their previous possession and marched down the field, copying them the same outcome when Jimenez added his second rushing score of the night, pulling them to a 31-27 mark as the fourth quarter started.

Rodriguez then sealed the win for Ventura with 1:01 remaining in regulation when he took the reverse handoff and scored the games go-ahead touchdown from eight yards out.

Northview scored on its final possession when Jimenez connected with Damion Thompson pushing the score 38-35 after a successful two-point conversion with 44 seconds left in the frame. However, their onside attempt failed, with the ball falling into the Cougars hands as well as the win.

Ventura will play Cypress next Friday at 7:00 p.m.