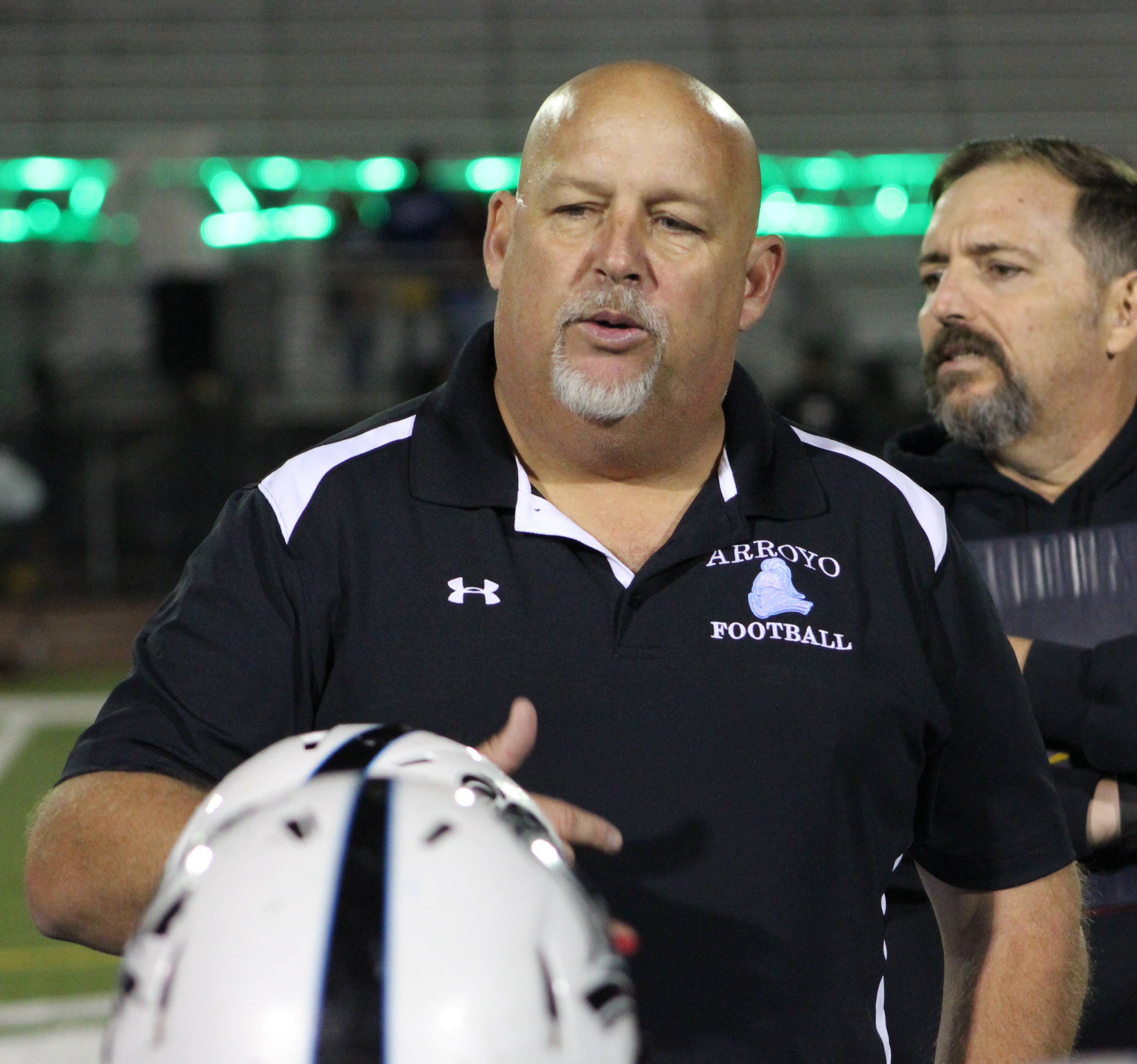 Jim Singiser has steppd down as the head coach at Arroyo after a 17 year run.

(El Monte) – Jim Singiser has resigned as the head coach at Arroyo after a 17 year run. Friday night’s 48-20 playoff loss to Hemet was his last game he confirmed early Saturday morning.

Singiser has spent the last 26 years coaching at Arroyo having spent nine years on D.J. MacKinnon’s staff as an assistant before taking over as head coach for MacKinnon in 2003.

“I just felt it was time. With my wife’s schedule and my schedule there were days that I didn’t even see her. With teaching and football there are days that I wouldn’t get home until 6:30 or 7:00. This will allow me more time to spend with my family,” Singiser said. “But this is 100 percent my decision. Over 17 years as head coach there are so many great memories and maybe some that were not so great. But no regrets at all.”

This past season the Knights finished third in the Mission Valley League and 5-6 overall after the first round loss to Hemet Friday night in the first round of the CIF Division 11 Playoffs.

“These are some of the best kids I’ve ever coached,” Singiser said of this year’s team. “The overall record may not indicate that but with all of the injuries we’ve had and they way we still competed it was a great year. I’m really proud of this group.”

Singiser won 138 total games as head coach with a winning percentage of .700 which is the greatest in school history. He won 10 MVL titles along the way and a CIF Championship in 2016 in a dramatic 35-34 win over Rancho Mirage at B.L. Bergstom Stadium.

“There were a lot of great moments but that was definitely my best memory. The way the whole thing played out…the two point conversion to win the championship…at home…it was just incredible,” Singiser said.

Although the 2016 team was the title winning team it was not the best team Singiser coached during his tenure.

“It was the 2004 team.” Singiser said “That win we had at La Serna in the second round of the playoffs was probably the best overall performance that we ever put together when I was head coach. We lost against South Hills in the semis but that 2004 Arroyo team was the best. Those kids were just so tough.”

The loss to South Hills was the only one for the Knights that year as they finished 12-1. “If our coaching staff would have had that team 3 or 4 years later we may have had another ring.” Singiser said.

Singiser will continue to teach at Arroyo but now the head coaching reins will be passed on to someone else.

The next head football coach at Arroyo will be just the third one in the past 40 years.

16 Comments to "Singiser Resigns at Arroyo"