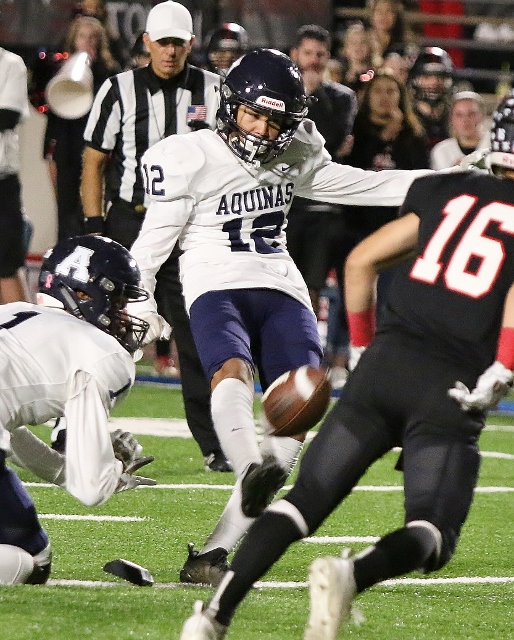 The Falcon’s Angel Pais boots through the game winner to end Glendora’s season.

One more from “One Year Ago” as Duane Barker saw Glendora ousted in the Division V semis by Aquinas on a late field goal at Citrus College on November 22, 2019.

(Glendora) The Glendora Tartans hosted the Aquinas Falcons in the semi-finals of the CIF Division V playoffs and fell to the visitors 24-21 on a field goal by Falcon kicker Angel Pais at Citrus College’s stadium.

Pais’ boot came with :08 left on the clock to complete a 10 play drive that started at the Falcon 32-yard line.

Glendora got on the board first taking their opening drive 65-yards on 13 plays with Xzavier Ford getting the call from three yard out. Jake Peralta added the extra point for the 7-0 lead with just under seven minutes gone in the opening frame. 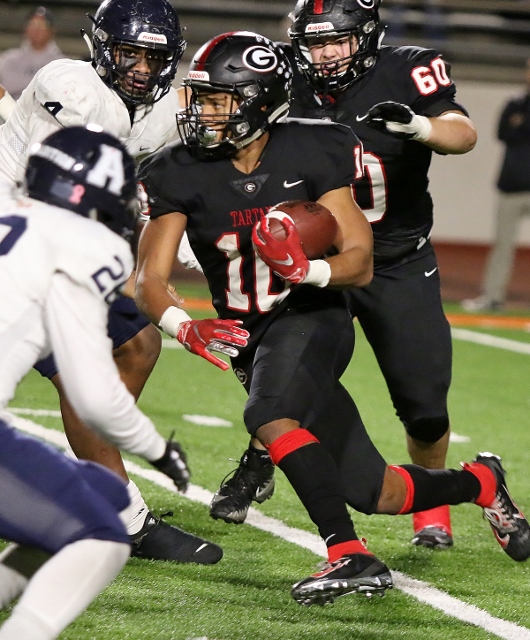 Xzavier Ford was the workhorse for the Tartans.

The Tartans maintained their 7-0 advantage until 8:43 left in the second quarter when Terayon Sweet scored on a two yard run. Pais booted through the extra point to knot the game at seven.

With 4:06 remaining in the first half, Glendora regained the lead on a five yard pass from Jacob Gonzalez to AJ Salgado. Peralta added the extra point and the score remained 14-7 as the teams headed to the locker room at the half.

The Tartans held on to their seven point advantage through the majority of the third quarter and it wasn’t until 1:55 left that Aquinas managed to tie the score. Sweet got the call again and leapt over a Glendora defender on his way to paydirt from seven yards away.

The Falcons’ Brent Austin put Aquinas in great position to take their first lead of the night when he picked off Gonzalez and returned the ball to the Glendora 34. One play later Francisco Mauigoa hit Terrance Fall on a 34-yard strike. Pais added the point after for the 21-14 lead.

With time winding away in the fourth, the Tartans came back to tie the game at 21. They did so in grand fashion as Gonzalez was forced out of the pocket and fired deep down the sideline in the direction of Cade Marshman. Marshman managed to get behind the Falcon defenders, caught the ball and fell into the endzone for the touchdown. With Peralta’s extra point the teams were back even at 21 with 3:28 left to play.

With the time clicking away on the clock, the Falcons marched down the field an into Tartan territory. When the drive stalled at the Glendora 13, Pais came on to drill the 30-yard game winning field goal.

For Glendora, Gonzalez finished the night connecting on 16 of 20 passes for 206 yards and a touchdown. His favorite receiver Marshman hauled in six of those balls for 73-yards and a score.

On the ground for the Tartans Ford led the way with 81 yards on 22 carries and the lone touchdown. His counterpart Sweet ground out 70-yards on 15 carries with two scores.

For the Falcons through the air Mauigoa was 13 of 21 for 187 yards and a touchdown.

(1683)
$326.00 (as of n/a - More infoProduct prices and availability are accurate as of the date/time indicated and are subject to change. Any price and availability information displayed on [relevant Amazon Site(s), as applicable] at the time of purchase will apply to the purchase of this product.)

(11563)
$17.98 (as of December 4, 2020 - More infoProduct prices and availability are accurate as of the date/time indicated and are subject to change. Any price and availability information displayed on [relevant Amazon Site(s), as applicable] at the time of purchase will apply to the purchase of this product.)

(101)
$409.00 (as of n/a - More infoProduct prices and availability are accurate as of the date/time indicated and are subject to change. Any price and availability information displayed on [relevant Amazon Site(s), as applicable] at the time of purchase will apply to the purchase of this product.)
Posted in High School Football, High School Sports