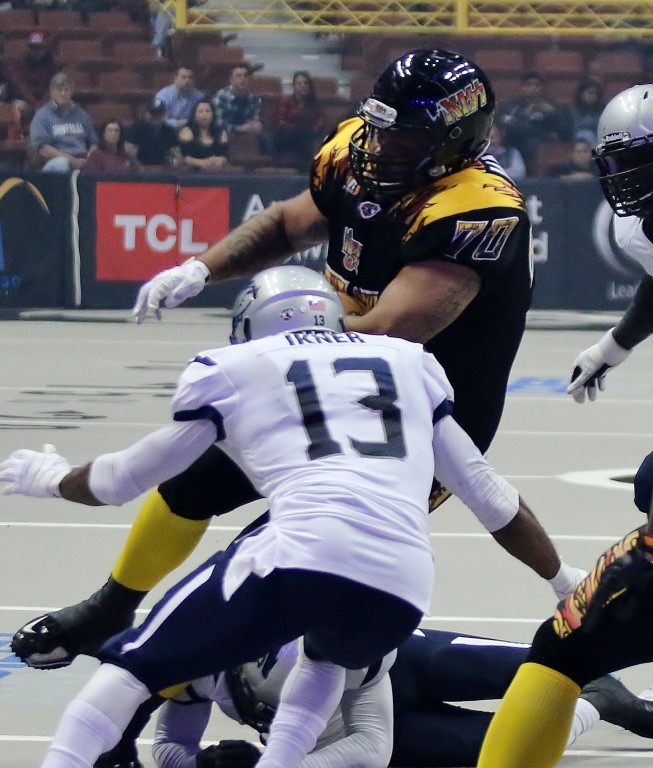 (Anaheim) – KISS defensive back Josh Victorian scored on a pick six on the first possession of the game and LA was in the driver’s seat the rest of the way in a 66-27 rout of Portland Monday night before 9,235 at Honda Center.

The KISS led 27-14 at the half as Nathan Stanley threw three touchdown passes including a pair to Donovan “Captain” Morgan of four and 20 yards and one to Brandon Collins. The Steel tried to stay in it behind quarterback Darron Thomas. Thomas threw a pair of touchdowns. His four-yarder to ex KISS receiver Tom Gilson just before the half cut the LA lead to 13.

Morgan picked up number three of the night on a six-yard toss from Stanley to put the KISS up 33-14 on the first possession of the third quarter. The KISS held the Steel on downs and Stanley connected with D.J. Stephens in the corner of the end zone for a 39-14 advantage. The extra point was missed. 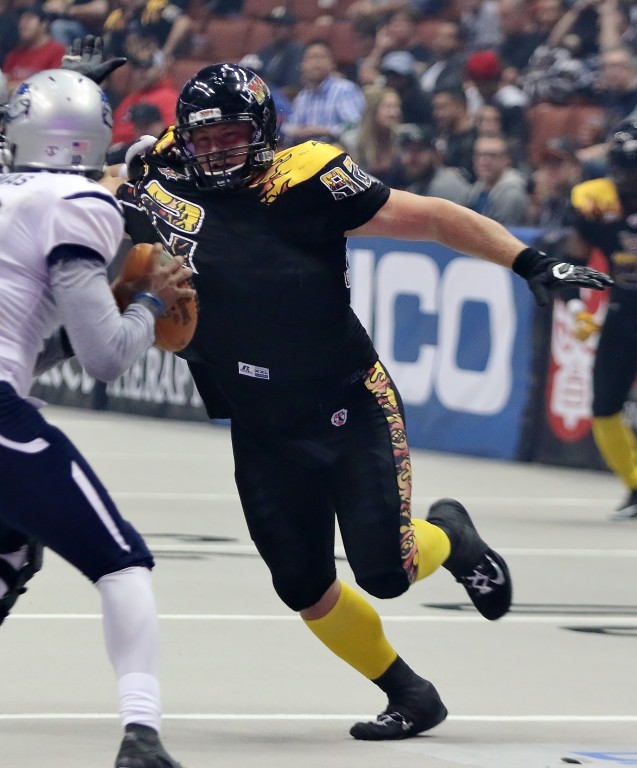 However the Steel refused to melt. Gilson hauled in his second score of the evening late in the third quarter and after another Stanley to Collins connection Terrence Mitchell returned a kick off back 55 yards for a touchdown to cut the lead to 46-27.

A KISS turnover put Portland in scoring position again but Dan Buckner stepped in front of a Thomas pass and returned  it 45 yards to the house to make it 53-27 and drive a stake through the Steel.

Victorian got his second pick of the night with less than two minutes left. The KISS immediately cashed in as Stanley hooked up with Morgan on the first play with 1:oo left to make it 60-27. For Morgan it was his fourth TD of the contest.

On Portland’s final possession, Fredrick Obi picked off a pass in his own end zone and returned it 52 yards to the house as time ran out for the final tally. It was the KISS’ third pick six of the night and their fifth interception overall.

Stanley completed 23 of 31 for 233 yards and seven touchdowns for LA. Morgan had eight catches for 65 yards to go along with his four scores. Collins had seven receptions for 75 yards and two TDs. For the Steele, Thomas was 25 of 49 for  259 yards and three touchdowns but was killed by the five picks. Gilson had 10 catches for 78 yards.

“The defense played well all night for the most part. We put a challenge up to our DBs that they needed to play well and play well early to set the tone,” said KISS head coach Omarr Smith. “Hopefully our offense can feed off of that. And they came out and did that. In the second half the pass rush kind of took over and they made our job easy in the secondary. When you get interceptions it’s really because of the pass rush.”