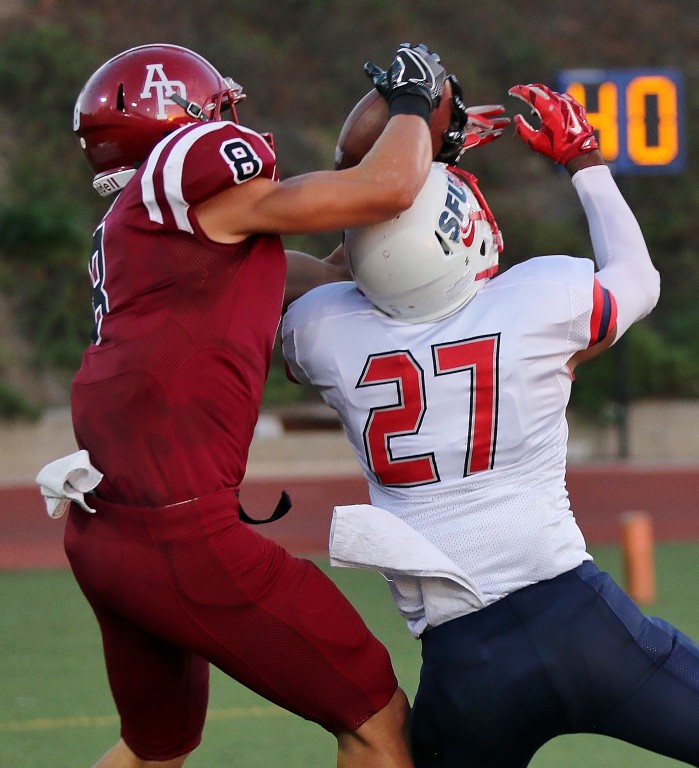 Weston Carr was a big part of the Cougar aerial assault. (Photo by Duane Barker)

(Glendora) – Azusa Pacific jumped out to a 41-7 halftime advantage and rolled to a 64-14 rout of Simon Fraser Saturday night at Citrus College.

Simon Fraser actually scored first when the Cougars fumbled the opening squib kickoff. The Clan cashed in with a 36-yard touchdown pass from Miles Richardson to Gavin Cobb.

But the Cougars scored the next 64 points to blitz the Canadians.

Jaime Cacciatore started the onslaught by booting a 38 yard field goal on the next series for APU to make it 7-3. After Simon Fraser botched a punt attempt the Cougars took  advantage as Andrew Elffers hit Brandon Jackson with a 22-yard TD strike on the first play for a 10-7 lead. 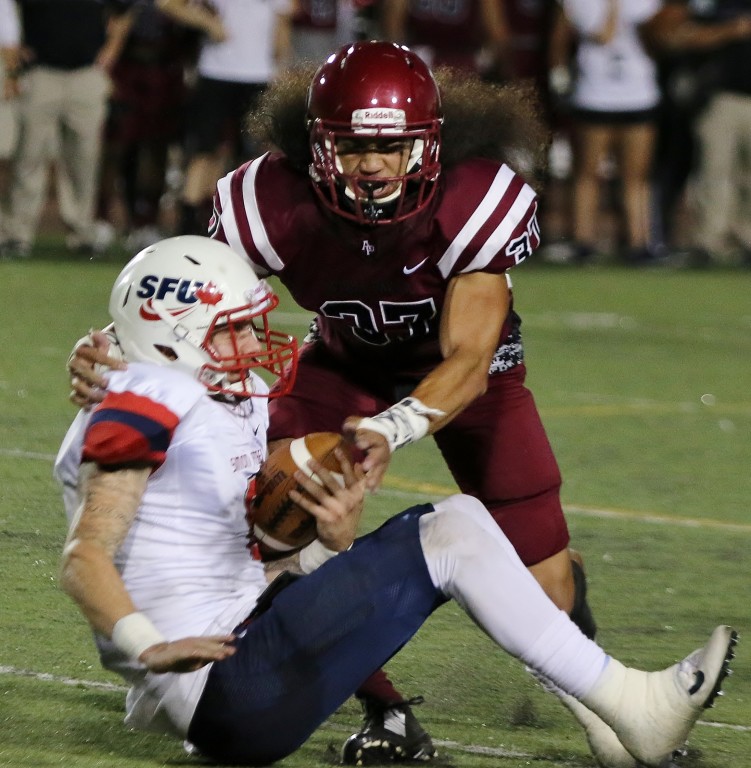 Taliuaku Suliafu and the Cougar defense were a nightmare for Simon Fraser. (Photo by Duane Barker)

Taliuaki Suliafu picked off a pass and returned it into Simon Fraser territory on the ensuing possession. After an Elffers pass to Weston Carr took the Cougars down to the four yard line, Aaron Baltazar blasted in from the two to give APU a 17-7 advantage.

After the Cougars forced Simon Fraser to punt, Chad Jeffries, in replace of Elffers connected with Weston Carr on an 85-yard touchdown pass. Carr caught the ball over the middle shook off a tackler and was off to the races.

On the next series Jeffries struck again as he found Jackson for 28 yards for a 31-7 lead with 8:51 left in the first half.

The Cougar D caused another turnover on an interception by LeAndre Jefferson and took over at the Clan 19. The Simon Fraser defense stiffened however and the Cougs settled for a 42-yard Cacciatore field goal.

The Cougars added seven more with 54 ticks left in the first half when Jeffries rifled a 35-yard strike to Jackson for a score. For Jackson it was his third touchdown of the night.

In the third quarter APU blocked a punt and Kenny Norton fell on it in the end some to make it 48-7.

On the next series Elffers connected with Darrell Adams Jr. for a 34-yard touchdown and the Cougars surpassed the 50 mark as the scoreboard read 55-7.

Josiah Thropay joined the party with a 22-yard touchdown reception from Elffers with 1:45 left in the third quarter to make it 62-7.

On the next series a penalty knocked Simon Fraser back to the two yard line and then the Clan was caught in their own endzone by Jefferson for a safety.

Simon Fraser snapped APU’s 64 point run with a Richardson 36-yard touchdown pass early in the fourth to make it 64-14.

Jackson caught five passes for 106 yards and three scores and Carr hauled in three for 120 yards and a touchdown. Ethan Zeidler added four catches for 67 yards.

“I’m proud of the guys on defense and they way they responded and the offense took control of things,” said Azusa Pacific head coach Victor Santa Cruz. “I’m really excited how the passing game opened up tonight, and also I thought we got a chance to play a lot of people which is good.”

The Cougars remain undefeated on the season at 4-0 while Simon Fraser (0-4) is still searching for its first victory.