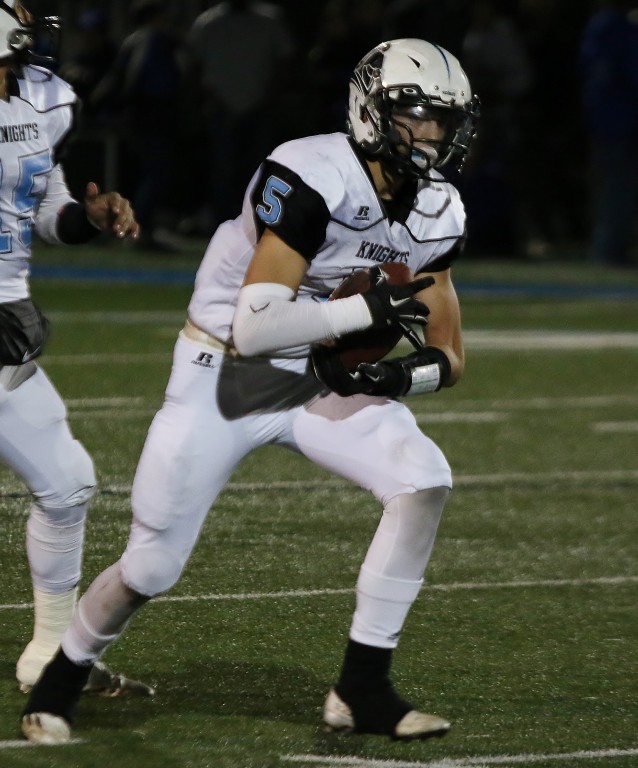 Daniel Mendoza score twice for the Knights in the loss to La Jolla Country Day.

(La Jolla) – Braxton Burmeister threw for 365 yards and five touchdowns and ran for another to lead La Jolla Country Day to a 63-42 win over Arroyo Saturday night in the Division 5-A State Bowl.

Burmeister had to be at his best to hold off Ernesto Camacho and the Knights. Camacho threw five TD strikes and 379 yards of his own but he was hurt by two interceptions that were returned for touchdowns. The second pick six, by Casey Mariucci for 48 yards came with just 1:08 left in the contest and accounted for the final score.

The Knights were down 28-20 at the half and 49-42 with just 1:52 left in the contest. Arroyo went for it on fourth down at its own 28 with 2:56 left in the game but Camacho was sacked at the 19 to ice it for the Torreys. Three plays later Brennan Goring caught a 15-yard touchdown pass from Burmeister to make it 56-42 and that was all she wrote.

The Knights gave La Jolla all it wanted throughout the evening. On their next possession Camacho was intercepted by Mariucci who took it back to the house.

Daniel Mendoza, who caught a touchdown pass and scored on a two-yard run for Arroyo, hauled in a 15-yard touchdown reception in the first quarter to cut La Jolla’s lead to 7-6.

The Torreys scored twice early in the second quarter to open it up to 21-6 and the Knights were chasing the rest of the night. Leading 14-6, Goring stepped in front of a Camacho toss and returned it 35 yards for a score.

Arroyo responded later in the quarter when Camacho scrambled out of the pocket and found a wide open Ben Le for 61-yard touchdown. After La Jolla Country Day struck again on a 42-yard TD pass from Burmeister to Mariucci, the Knights answered with a 93-yard toss to Devin Knight, who caught Camacho’s toss and scooted down the far sideline outrunning the La Jolla secondary to the end zone.

In the third quarter Steven Ocariz, corralled a 21-yard Camacho bullet for a score to make it 35-27 but it seemed like every time the Knights got within a score, Country Day countered and they did again with 4:00 left in the third when Jaden Dir hauled in a 34-yard touchdown pass from Burmeister and it was 42-27 after three.

Mendoza’s two -yard run and a two-point conversion pass by Camacho to Daniel Martinez sliced it to 42-35 early in the fourth. Arroyo, keeping its head above water, and continuing to give Country Day fits, hit on one last big play. Camacho worked his way out of trouble, and fired a 28-yard scoring strike to Yezdan Marquez in the end zone and with 6:38 left in the fourth quarter it was 49-42.

The Knights held the Torreys on the next possession, and got the ball back on their own 31, but they were unable to generate a drive and were stopped on fourth down.

Mariucci was the go to guy for La Jolla catching seven passes for 118 yards and two scores to go along with the pick six.

For Arroyo, Camacho, only a sophomore, threw to seven different receivers including Knight who had four catches for 125 yards and a touchdown.

“We were kind of banking on a shootout knowing they were going to be tough to stop. You stack the box and stop the run with him (Burmeister) and he’s got a good enough arm to exploit you on the outside and we just didn’t have the speed up front. With the mistakes we made in the secondary tonight you’re going to get eaten up,” said Arroyo head coach Jim Singiser.  “But looking at the scoreboard the kids never stopped playing and that’s what we asked of them.”

The season ended in a loss for Arroyo, 13-2, but the campaign was a huge win overall. The Knights captured their first CIF title in 30 years with an overtime win over Rancho Mirage last week.

“Right now a loss is a loss. You can’t sugarcoat it, we haven’t done that all year. But the kids played hard, I’m proud of them. I’m proud of the fans, you know we probably brought more fans than they did,” Singiser added.