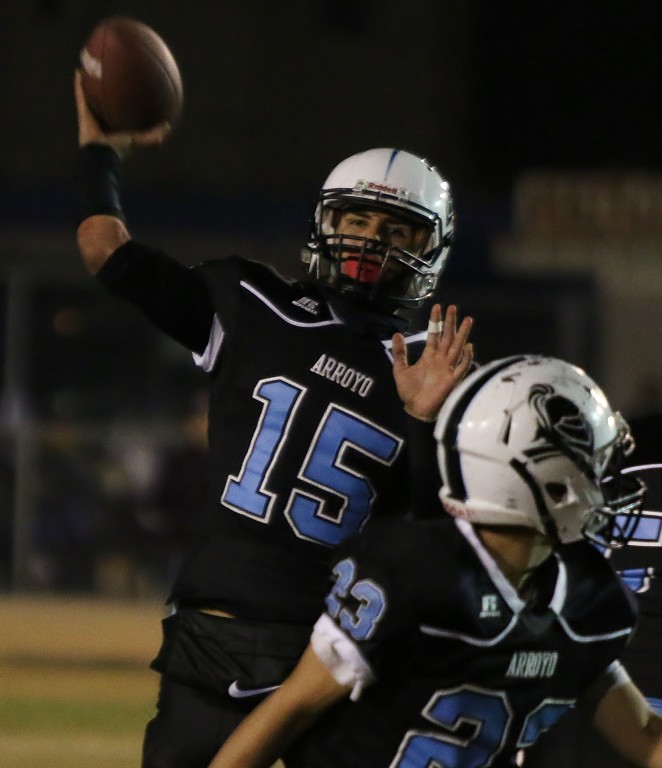 Ernesto Camacho wasn’t supposed to see much action in 2016. Arroyo had its quarterback. He was penciled in back in the summer and in the early part of the year looked like he was locked in for the whole year.

Then there was an incident in which the starting quarterback was suspended opening the door for Camacho to step in. Camacho not only took advantage of the opportunity, he embraced it.

Camacho stepped in full time in week four against Rowland and immediately threw for 200 yards and two touchdowns in a 42-7 victory. That was just the beginning. By the time the year was over Camacho had thrown for 3,158 yards and 35 touchdowns with just six interceptions leading Arroyo to the CIF title and a trip to the State Bowl.

Camacho completed 18 of 27 for 412 yards in a 70-21 semi final win over Segerstrom and followed that up with 229 yards including the two-yard game winner on the two point conversion in the CIF championship victory over Rancho Mirage.

Camacho, only a sophomore, also ran for 529 yards and 11 touchdowns on the year. When opportunity knocks, you open the door. Camacho not only opened the door, he broke it down. Ernesto Camacho is our Newcomer of the Year.

18 Comments to "Newcomer of the Year: QB Ernesto Camacho – Arroyo"