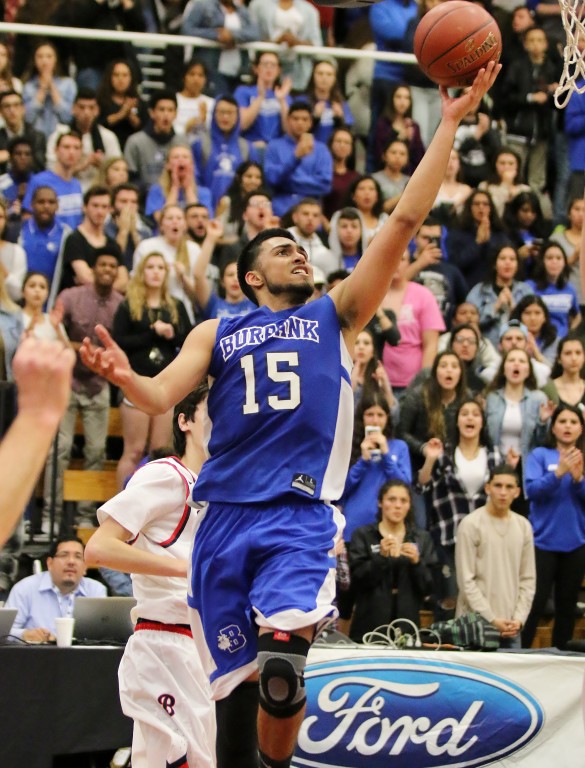 Faraz Khandaker glides in for two of his 18. (Photo by Duane Barker)

(Azusa)— Brentwood’s Braelee Albert’s three-pointer as time expired lifted the Brentwood Eagles to a 55-54 victory over the Burbank Bulldogs in the CIF Division 3AA Boys Final Friday night at the Felix Event Center on the campus of Azusa Pacific University.

The Eagles let an 11-point lead slip away in the fourth period. Then saw the Bulldogs Cameron Sweeten tie the game with a layup at the end of regulation, before Albert’s desperation three-pointer from 25-feet gave the CIF title to Brentwood.

Albert, only a sophomore, finished with 27-points and 11-rebounds for the Eagles. Teammate and fellow sophomore, Eric Olofson added 14. 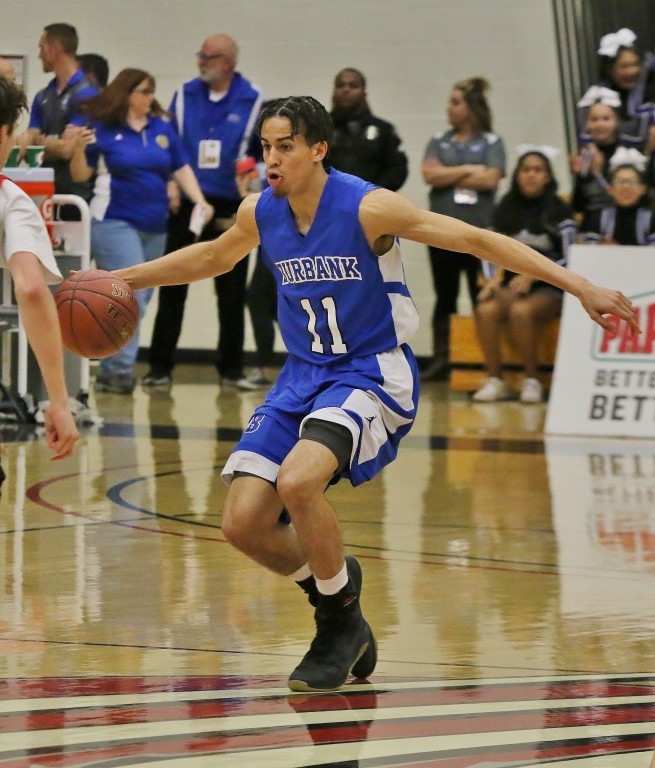 Burbank, which struggled offensively for most of the night, was led by Faraz Khandaker’s 18 points and Michael Wood’s 10-points and 10-rebounds. The Bulldogs were only 19 of 62 from the field (30.6%) and just six of 26 from beyond the arc.

In the third quarter, the Eagles took control. Outscoring the Bulldogs 15-9, they used solid offensive sets with Albert and Olofson doing most of the damage. Burbank couldn’t get an offensive rhythm and was forced to launch, continually, from the outside.

With 3:30 to play in the third, Henrik Anassian knocked down a pair of free throws to give Burbank a 29-27 advantage. They wouldn’t score again for another 7:58 (nearly an entire quarter) as Brentwood went to work and built a 39-29 and eventual 43-32 lead.

After Brentwood’s Samuel Clareman stole a pass and converted a layup, it was 45-34 with 3:17 on the fourth quarter clock.

But that score was followed by a pair of threes from Burbank to narrow the gap. Cameron Sweeten made a three-point play, and it was 45-43. Albert answered with a score down low. The Bulldogs Sweeten scored once and then with zero time left scored again to send it into overtime.

In OT, Burbank jumped to a 50-47 lead before the Eagles Finnley O’Rourke scored on a put-back. Albert added a free throw, and 30-seconds later added another bucket to make it 52-50 in favor of Brentwood with 1:14 remaining.

Khandaker put the Bulldogs back up with a three-point play, Burbank added another free throw…but missed its next four from the charity stripe to set up Alberts heroics.