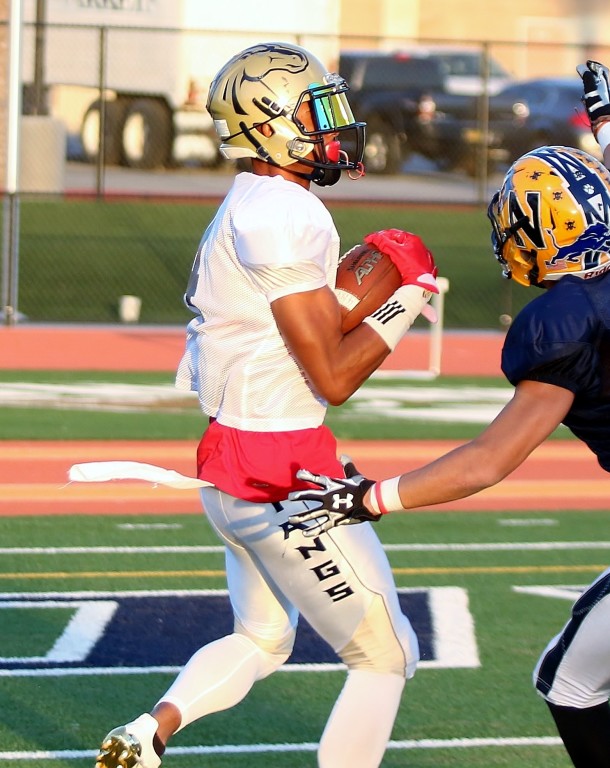 Elijah Blades hauls in one of his two touchdown passes. (Photo by Duane Barker)

(Covina) – Raeshawn Roland of Arcadia hauled in an 18-yard touchdown pass from Monrovia’s Richie Schroeder with just 43 seconds left to give the North a 22-18 win over the South Saturday night in the SGV All-Star game at Covina District Field.

A pedestrian game turned into a barn burner in the fourth quarter as the lead exchanged hands four times. The South was down 7-6 after three but grabbed the lead early in the fourth when Los Altos’ Andrew Manuele scored on a three-yard run to make it 12-7. The two point conversion attempt failed. 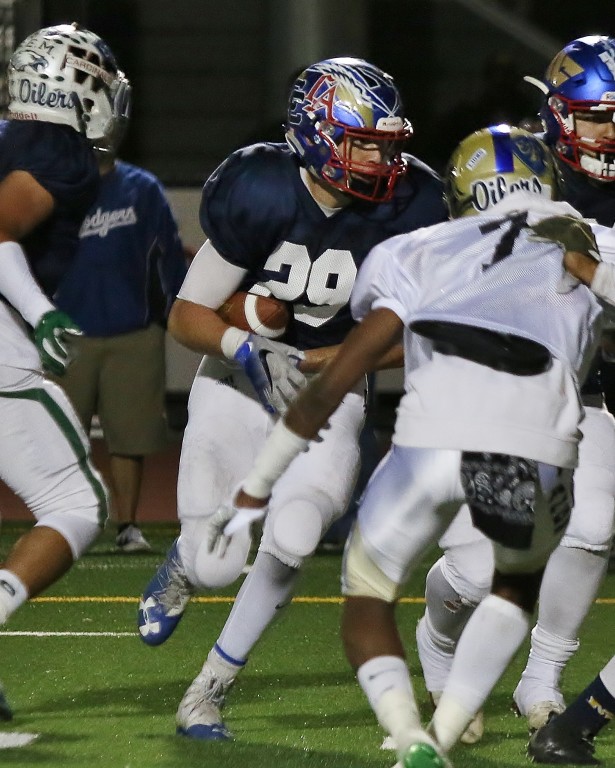 Andrew Manuele gets a go ahead score late in the contest. (Photo by Duane Barker)

The North responded a  little over two minutes later when Muir’s Elijah Blades, who is headed to Nebraska this fall, caught his second touchdown pass of the night – a 40 yard strike from Schroeder as he simply outran the South secondary into the endzone.

The South regained the advantage with 2:36 left when Jordan Thomas of Norwalk plowed in from the two yard line for an 18-15 lead. It was Thomas’ second touchdown of the evening. Again the two point attempt went awry.

The North then marched quickly down the field where Roland came up with the game winner.

Blades got the North on the board in the first quarter when he again beat the South defense running under a 40-yard bomb by Schroeder with 1:20 left in the quarter for a 7-0 advantage. Both teams had trouble finding their footing as miscues and turnovers continually halted drives. The North took the seven point lead into the half.

The South cut the lead to 7-6 with 6:49 left in the third quarter on a 30-yard touchdown run by Thomas. It stayed that way until the fourth quarter fireworks began.

Santa Fe’s Chris Ramsay threw for 142 yards for the South but was hurt by two interceptions – both by Ahmir Davis of Muir for the North.

Raylind Butler from Norwalk had five receptions for 66 yards to help the South passing attack.