El Monte feels like it just hit the lottery. The Lions go from having nothing with no light at the end of the tunnel to suddenly landing one of the better coaches in the valley.

One day El Monte is re-posting the head coach position and two days later Jesse Ceniceros is announced as the new head coach. If Ceniceros doesn’t come out of the blue the Lions are looking at another month at least before they have somebody in place. Ceniceros, who has been coaching for the last decade (Norwalk, Chino), has never missed the playoffs. He guided Norwalk to the CIF Finals and he had Chino in the post season in the two seasons that he was there.

It took long enough but it turned out be well worth the wait. Like it or not, and for some reason many people commented on our site that they did not, this was the best of all possible scenarios for El Monte. The fact that Ceniceros runs the double wing offense is also a bonus. It’s an offense that El Monte should be able to adapt to right away and with the passing circuit already well underway, it won’t hurt the Lions to miss throwing the ball around. When you run the ball 90 percent of the time who needs passing leagues?

How did El Monte land Ceniceros? The best explanation came from Ceniceros himself. “I was more surprised than anybody that I’m the new coach at El Monte. Once I got there and they showed me around the campus it just felt right,” he said.

A phone call from a former coach led to a meeting with the AD and here we are. And El Monte is counting its blessings. 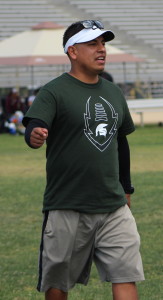 Eric Elias working with the offense at Schurr

I ran into Schurr assistant Eric Elias at a passing league at Arroyo Saturday. Elias a longtime assistant at Arcadia and most recently Buena Park, was just hired by the Spartans to help out with the quarterbacks and the offense. “It’s been a great two weeks of practice. I’m happy to be here. It’s been great,” Elias said.

Elias will work closely with former Schurr receiver Carlos Arredondo, who also runs the offense. The Spartans have a solid young quarterback and some skill position players to work with. They will definitely be in the mix to win the Almont.

Rumors abound that Arroyo will be moved up to Division 11 when the new alignment is announced by CIF in August. Although one would think that teams would like more time to adjust to their new division it doesn’t seem to bother Arroyo HC Jim Singiser.

“What are you gong to do? You can’t change your schedule anyway. That’s already set. It is what it is,” Singiser said.

“Only move us up one division? That’s fine. I’ll take that. I don’t worry about all the division stuff. Just let me know where we are and we’ll play,” said Arroyo offensive coordinator Chris MacMillan.

The Charter Oak Super 7 tournament, one of the best of the circuit, is this Saturday May 20.

I’m not sure why Muir’s Elijah Blades played in the SGV All-Star game Saturday night at Covina District Field, but I’m glad he did. Blades, who is  headed to Nebraska in the Fall, made two great plays for touchdowns to lead the North to victory. I can live with Monrovia quarterback Richie Schroeder taking home North offensive MVP honors for throwing three touchdown passes, but without Blades on the receiving end of two of those, there’s no way that would have happened.

There is still one head coaching position open as San Gabriel continues its search. Haven’t heard a whole lot, but something has to break soon. A comment on the boards indicated that a guy from San Diego is being brought in and is the front runner. But comments have also indicated that Jude Oliva is the next head coach and we all know that’s not happening. Stay tuned…

Speaking of the SGV All-Star game, the first three quarters were forgettable. Fumbles, bad snaps, interceptions and miscues were the order of the day until the fourth quarter. But four lead changes, a couple of great catches, and a few big time throws salvaged the evening. It’s like when you play golf and are shanking shots all over the lot. And just at that moment when you’re about to toss your clubs into the lake, you hit that one shot – that one shot that will keep you coming back. As far as high school football All-Star games, I’ll keep coming back.

Tim can be reached at tim@midvaleysports.com or on Twitter @tspeterson40.